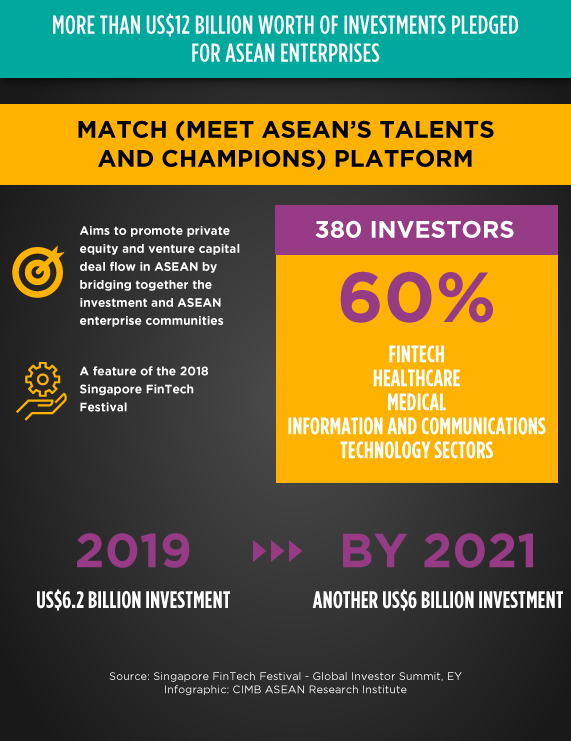 E-investment matching platform attracts US$12billion for ASEAN enterprises
(22 October 2018) The Monetary Authority of Singapore (MAS) has announced that through the MATCH (Meet Asean’s Talents and Champions) platform, 380 investors have expressed interest to invest up to US$6.2 billion in ASEAN enterprises in 2019, with another US$6 billion earmarked over the next two years. According to MAS, about 60% of intended investment in 2019 would be mostly in the FinTech, healthcare, medical, information and communications technology sectors. Powered by EY, the MATCH platform is a feature of the 2018 Singapore FinTech Festival that matches ASEAN enterprises with sources of global private equity and venture capital. The matching exercise which was conducted from May to September 2018, generated 17,000 matches between 380 investors and 840 enterprises.

Thai government is positive about the 2018 export demand for milled rice
(25 October 2018) Despite the decline in demand in September 2018, the Thai government remains optimistic about achieving 11 million tonnes of milled rice exports in 2018. The Director-general of the Foreign Trade Department Adul Chotinisakorn noted that the prospects for rice exports have been positive for the last quarter, particularly with government-to-government (G2G) deals with China, the Philippines and Japan. Data from the Foreign Trade Department showed that from 1 January to 19 October 2018, rice exports totalled 8.93 million tonnes, a rise of 2.71% from the same period in 2017.

Singapore poised to achieve Industry 4.0 vision
(24 October 2018) To realise its Industry 4.0 vision, Singapore has acted swiftly and systematically by creating the necessary soft and hardware infrastructure. Senior Minister of State at Singapore’s Ministry of Trade and Industry Koh Poh Koon said Singapore has strong tri-party cooperation among government, business and trade unions in moving towards this direction such as by having substantial consultations on how to move Singapore’s economy up the value chain of global production. The minister added that the government is working closely with trade unions to reskill and upskill workers. Trade union leaders play a key role in encouraging workers to participate in upskill programmes or training for new jobs.

ASEAN firms confident in digital transformation but the rate of tech adoption is still low
(25 October 2018) A report commisioned by Nasdaq-listed technology firm Cisco stated that more than 9 in 10 firms in Southeast Asia are optimistic in the competitive advantage of its digital transformation plan. According to the report, the level of confidence among participants from six ASEAN nations is at 94%, which is better than the rest of Asia Pacific, which were 84% confident of their digital strategy. However, the survey also found that technology adoption rates are low in the region and it is due to budget constraints, lack of adequate talent and limitations of information technology (IT) infrastructure. Cloud services were widely used in ASEAN as it recorded an average adoption rate of 60% while cybersecurity and big data analytics were at 59% and 55% respectively. The study surveyed 1,325 senior IT managers from prominent companies across six sectors in Australia, China, India, Japan, South Korea, Indonesia, Malaysia, the Philippines, Singapore, Thailand and Vietnam.

Malaysian and Thai Prime Ministers voiced commitment for a stronger ASEAN
(24 October 2018) Malaysia’s Prime Minister Tun Dr Mahathir Mohamad has called on ASEAN leaders to leverage on the economic potential of the regional population of 630 million. The Prime Minister who was on a two-day official visit to Thailand said that leaders in the region want to see ASEAN become a strong regional organisation. Likewise, Thai Prime Minister Prayut Chan-o-cha said that ASEAN needs to come together and exercise utmost prudence in managing challenges in order to stay united and maintain Asean’s centrality. Thailand will be the next Chair for ASEAN in 2019.

Vietnam is the third largest exporter of shoes and leather in the world
(24 October 2018) According to Vietnam’s Ministry of Industry and Trade (MOIT), the country exported shoes and leather products worth US$11.7 billion in the first nine months of 2018, thus making it the third largest global exporter of these goods. The MOIT also highlighted the challenges faced by the Vietnamese footwear industry such as rising labour costs and low productivity. The ministry added that Vietnam’s imminent signing of the various free trade agreements is expected to open further opportunities for its footwear exports to the member states in the European Union (EU) and Comprehensive and Progressive Agreement for Trans-Pacific Partnership (CPTPP).