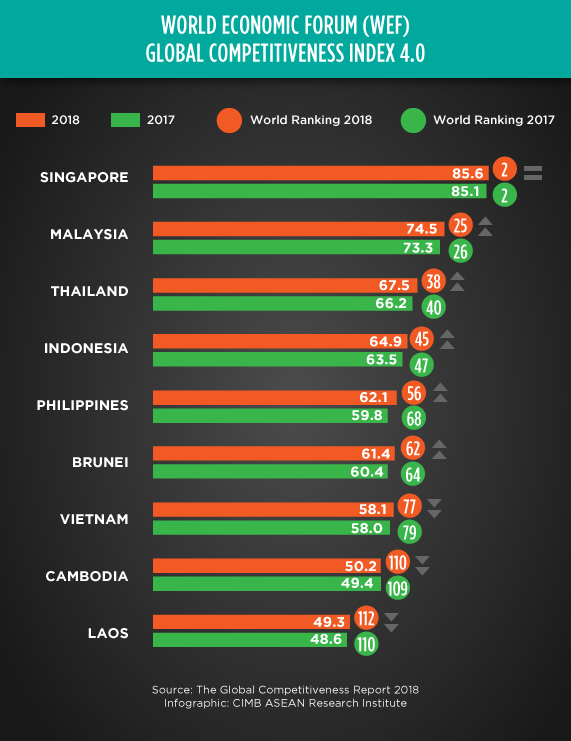 Singapore ranked second in global competitiveness while Malaysia’s standing improves
(17 October 2018) Singapore is the top-ranked ASEAN nation in the World Economic Forum (WEF)’s Global Competitiveness Report 2018 while Malaysia improved considerably to be the second top ASEAN nation in the rankings. Out of 140 countries, Singapore was second with 85.6 points while Malaysia was ranked 25th with 74.4 points. The 2018 report introduces the new Global Competitiveness Index 4.0, by including the advent of the Fourth Industrial Revolution (4IR) into the definition of competitiveness. The report, which was published on 16 October 2018, tabulates the scores for each nation according to its 12 pillars of competitiveness. The 12 components are institutions, infrastructure, ICT adoption, macroeconomic stability, health, skills, product market, labour market, financial system, market size, business dynamism and innovation capability. The ranking for the other ASEAN nations are: Thailand(38), Indonesia(45), the Philippines(56), Brunei Darussalam(62), Vietnam (77), Cambodia(110) and Laos(112). The report mentioned that Malaysia was one of the three non-high-income countries that were featured in the top 40.

Vietnam to open public procurement market to foreign investors for the first time
(17 October 2018) The European Union (EU) – Vietnam Free Trade Agreement (EVFTA) which is due to be ratified next year, will open up for the first time, Vietnam’s government procurement markets to foreign investors. Under the EVFTA agreement, European firms will be allowed under certain conditions, to bid for public procurement contracts in Vietnam according to the same regulations as Vietnamese businesses. A recently released guide to the EVFTA states that Vietnam is one of the nations with the highest ratios of public investment to GDP in the world. This ratio has remained at over 39% annually since 2995, with a large part invested in infrastructure projects. In 2017, the rate was 35.7% (or US$26.45 billion) of total development investment capital. The right to bid for Vietnam’s public tenders will initially be limited to relatively high-value contracts such as those worth at least US$2.1 million or US$4.2 million depending on the procurement agency.

MITI receives 14 proposals for third national car project
(17 October 2018) Malaysia’s Ministry of International Trade and Industry has received 14 bids from private sectors and also individuals on the new national car plan that was announced by Prime Minister Tun Dr Mahathir Mohamad. Deputy Minister of International Trade and Industry Dr Ong Kian Ming said that the government would take into consideration the National Automotive Policy (NAP) and identify the national automotive industry’s direction holistically before studying the economic impact of a third national car. He said the project is expected to be predominantly private sector driven while the government would only assist in terms of facilities and other forms of specific assistance. Addressing the parliament, Dr. Ong said that the automotive industry and other automotive-related sectors employed more than 700,000 people and contributed almost 4% to the national gross domestic product. He added that the automotive industry is a strategic component of the Malaysian manufacturing sector and that the project is expected to boost national growth as well as improve Malaysia’s engineering and technological capabilities.

Trabalho Bill could generate 1.4 million jobs by 2029
(17 September 2018) According to the Philippines’ Department of Finance (DOF), if the Tax Reform for Attracting Better and High-Quality Opportunities (Trabaho) bill is implemented, around 1.4 million jobs would be created between 2021 and 2029. The bill strives to cut the country’s corporate income tax (CIT) by a third to 20% and give out financial incentives to “deserving” industries. The DOF projected an increasing trend in employment for every 2% drop in the CIT rate. The agency also emphasized that 90,000 small and medium enterprises (SMEs) and hundreds of thousands more micro-enterprises would benefit from the increased opportunities accorded by the reduction in CIT rates.

Thailand to intensify FTA talks in the coming months
(16 October 2018) Thai negotiators are intensifying free trade discussions with dialogue partners for the remaining months of 2018 and look set to continue talks with the EU and join the Comprehensive and Progressive Agreement for Trans-Pacific Partnership (CPTPP) next year. The CPTP is a newly formed bloc of 11 Pacific Rim nations which excludes the US. Trade Negotiations Department Director-General Auramon Supthaweethum said Thailand is expected to hold the third round of free trade talks with Sri Lanka in December 2018. The two nations aim to finish negotiations in 2020. In July 2018, Thailand inked a memorandum of understanding (MoU) with Sri Lanka on a strategic economic partnership that included 10 sectors, with an aim to increase bilateral trade which would reach US$1.5 billion by 2020. Furthermore, Thailand will hold the fourth round of talks with Turkey in December 2018. Ongoing efforts are being undertaken to address mutually-agreed commitments on tariff reduction for goods. The talks are expected to conclude by 2019 or 2020.

ASEAN committed to substantially conclude RCEP negotiations by the end of 2018
(14 October 2018) At the 6th Regional Comprehensive Economic Partnership (RCEP) Inter-sessional Ministerial Meeting in Singapore, the ministers of the participating nations reaffirmed their resolve to bring negotiations to a substantial conclusion and reiterated that the completion of the package by the end of 2018 is an important milestone, particularly at the time of uncertainties in global trade. The meeting reviewed the developments since the 6th RCEP Ministerial Meeting in Singapore in end-August. The RCEP comprises the 10 ASEAN countries plus India, China, Japan, South Korea, Australia and New Zealand. Earlier in October 2018 in Bali, ASEAN leaders pledged to remain committed to upholding an open and rules-based multilateral trading system that has long underpinned the region’s economic growth.

Myanmar’s economy affected by illegal trade, government to draft policies
(17 October 2018) The Union of Myanmar Federation of Chambers of Commerce and Industry (UMFCCI) noted that smuggling and illegal trade continue to be significant obstacles for the country’s economy. According to the Business Sentiment Survey issued by UMFCCI, illegal trade stands at sixth among the top 10 issues hampering the country’s economy. Illegal trade hinders economic development as a result of money flowing to non-state groups; disruption of the economic model; and loss of tax revenue for the state. A pressing problem is the illegal export of local rice to China, which has increased over the last three years. While the Myanmar government permits controlled exports of rice to China, the amount being smuggled is believed to be expanding. Myanmar Minister of Finance and Planning U Soe Win cautioned that prevention policies are being studied to ensure that illegal trade in every state and region is stopped.

Cambodia plans to impose regulations on imported cars
(18 October 2018) The Cambodian Government plans to regulate the import of automobiles especially second-hand vehicles to ensure the quality of cars and safety of end-users. Cambodia’s Ministry of Public Works and Transport Secretary of State Pov Maly said that until now, the government has yet to set stipulations on the import of second-hand cars and engines despite the constant influx of these vehicles. He said the ministry is preparing a set of standards and cooperating with the Ministry of Industry and Handicrafts and the Institute of Standards to address the matter. Maly added that Cambodia must adhere to the ASEAN standardisation efforts which are targeted for 2023. With this initiative, standards which are set by all ASEAN members for imported vehicles must comply with international regulations.

Singapore and Austria to work closer on digital collaboration
(18 October 2018) Singapore’s Communications and Information Minister S. Iswaran and Austria’s Federal Minister of Digital and Economic Affairs Margarete Schrambock signed a pact to increase cooperation in digitalisation and information and communications technology. This development which took place during Singapore Prime Minister Lee Hsien Loong’s official visit to Austria, will see both countries exchanging ideas and know-how on their experiences navigating the digital economy and in areas such as digital government, e-commerce and emerging technologies like artificial intelligence. The MOU will focus on the exchange of information and best practices in four areas: digital economy and digitalisation strategies, including helping small and medium-sized enterprises and promising start-ups; digital government, including digital national identities and Smart Nation applications; electronic commerce and digital trade; and emerging technologies such as blockchain, Internet of Things and artificial intelligence, as well as regulatory approaches. According to Lee, there are 220 Austrian companies totalling investments of more than US$2 billion in Singapore.