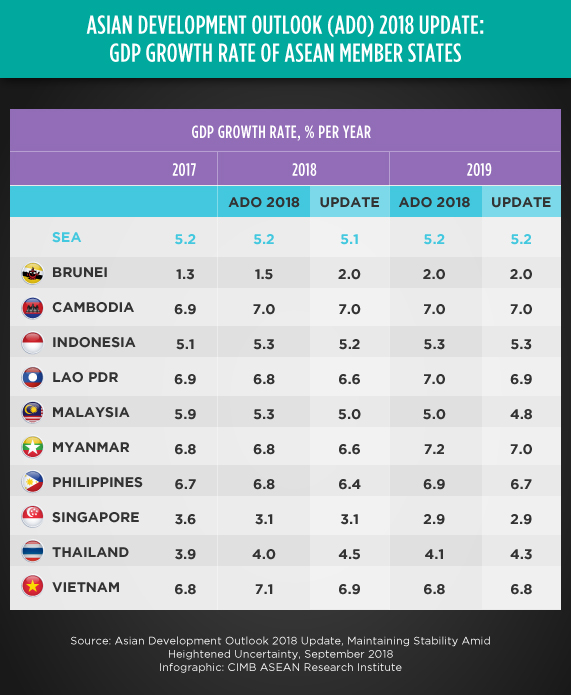 ASEAN’s GDP growth rate to reduce slightly in 2018 according to the latest ADO report
(26 September 2018) The latest Asian Development Outlook (ADO) report noted that Southeast Asia’s GDP growth rate for 2018 would decrease slightly to 5.1% from 5.2% in 2018. In its April report, the Asian Development Bank projected that the growth rate for Southeast Asia in 2018 would be at 5.2%. Southeast Asian growth is projected to dip slightly this year due to factors such as moderation in export growth, softer domestic demand, subdued agriculture, higher inflation, net capital outflows, and a worsening balance of payment. Of all the ASEAN countries, only Brunei Darussalam (2.0%) and Thailand (4.5%) look set to outperform the April projections for 2018. Cambodia (7.0%) and Singapore (3.1%) will likely meet April projections, according to the outlook. As for the projected growth rates in 2019, the GDP growth rates for Laos, Myanmar, Malaysia and the Philippines are expected to fall while those of Brunei, Cambodia, Indonesia, Singapore and Vietnam will remain the same. Thailand is the only nation which is forecasted to see an increase in its GDP rate (4.3%).

Trade war and household debt build-up to undermine ASEAN’s strong economic growth prospects
(27 September 2018) The escalating trade conflict between the United States and China and uncertain global economic climate could threaten growth prospects of Southeast Asian nations, according to the Trade and Development Report (TDR) published by the United Nations Conference on Trade and Development’s (UNCTAD). Increase in household debt and corporate debt in Southeast Asia could threaten Southeast Asia’s growth potential. Although Cambodia, Indonesia, Malaysia, Myanmar, the Philippines and Thailand had been posting strong economic growth, these nations have also raised their non-financial sector debt ratios by an average of almost 20 percentage points. Nevertheless, growth in ASEAN nations remains steady due to strong domestic demand, rising private consumption and infrastructure investments, especially in countries such as Indonesia and the Philippines. The UNCTAD report analyses current economic movements and significant international policy matters and comes up with ways to solve them.

Discovery of a new well to attract oil and gas investments into Myanmar
(26 September 2018) The discovery ShweYee Htun-2 appraisal well at offshore block A-6 near Rakhine State, which can produce natural gas for commercial purposes will draw more oil and gas investments into Myanmar. Myanmar’s Ministry of Electricity and Energy (MOEE), however, did not specify the timeframe on when the profit sharing contract (PSC) for development of the well would be signed. Union Minister of the MOEE U Win Khine said the government could purchase 25% of the natural gas generated from the well for domestic consumption at a cheaper rate, but negotiations for the price still has to be made. The ministry will be inviting tenders for exploration and production activities at unoccupied and relinquished offshore and onshore oil and gas blocks during the first and second quarters of 2019.

New free trade deal with EU set to see new European investors in Vietnam
(26 September 2018) Director of the Organization of La Francophonie’s Asia-Pacific office Eric-Normand Thibeault expects that once the EU-Vietnam Free Trade Agreement (EVFTA) is approved, a new generation of investors from Europe will penetrate into the Vietnamese market. According to the European Chamber of Commerce (EuroCham) in Vietnam, higher engagement from EU investors can be expected when the EVFTA takes effect. A representative from the Vietnam Central Economic Commission stated that many European investors are interested in the manufacturing sector as Vietnamese firms lack the capital and technology. Also, the free trade deal will boost Vietnam’s potential to emerge as one of the top spots in the world for investors in the garment and textile industries. Chairman of the Vietnam Textile and Apparel Association (VITAS) Vu Duc Giang said the sector attracted US$2.8 billion of FDI in the first half of 2018.

Market turbulence to impact positive Indonesian bank trends
(26 September 2018) In a report by credit rating agency Fitch Ratings, Indonesia’s improvement in banks’ asset quality is likely to be affected by currency depreciation and higher domestic interest rates. However, the margins are expected to remain steady due to high core capital ratios, which will act as a shield against market pressures. The strain on the Indonesian Rupiah has seen an immediate response from Bank Indonesia (BI), which has hiked its policy rate by a cumulative 125 basis points (bps) since May 2018. Fitch expects BI to increase its policy rate by a further 25 bps in the second half of 2018 and 50 bps in 2019.

Singapore unveils new technology to facilitate cross-border trade
(26 September 2018) Singapore’s Networked Trade Platform (NTP) will enable cross-border trade connection via technology. The platform, which was launched on 26 September 2018, combines four government certification services needed for trading in and out of Singapore. NTP will also add 25 value-added services by third-party firms geared towards trade. The new platform focuses on raising productivity by digitalizing the paper trail, improve competitiveness by providing accurate data analysis and generate opportunities for third-party service providers. The NTP was developed by the Singapore Customs and the Government Technology Agency of Singapore (GovTech) over four years, and supported by over 20 ministries, government agencies and working groups.

Malaysia cautious over product dumping due to trade wars diversion
(26 September 2016) Malaysia’s International Trade and Industry Minister Darell Leiking said Malaysia will take cautious steps to avoid product dumping in the local market due to diversion from the trade wars. He also urged ASEAN member states to work together to withstand any effects from the escalating trade war between the United States and China. He said with a population of 640 million, ASEAN market has enormous potential and ASEAN countries should invite other nations to invest and trade in Southeast Asia.

Remove productivity constraints to achieve poverty-free society by 2040
(25 September 2018) A World Bank report has urged the Philippines to remove limitations affecting the country’s productivity, namely restrictions on foreign investments. By doing so, it will help the Philippines to achieve its vision of a poverty-free society by 2040. In the report titled “Growth and Productivity in the Philippines: Winning the Future”, the World Bank said the Philippines would be able to generate better-paying jobs and lower poverty rate if it better uses its resources such as human capital, natural resources, technology and knowledge. The report noted that if the Philippines were to achieve its vision by 2040, it would need to triple its income per capita to around US$3,500 in the next two decades. The Philippines’ economic growth should be at an annual average of 6.5% in the next 22 years compared to its average growth rate of 5.3% since 2000.

Government to revise Laos’ economic growth target
(28 September 2018) Laos’ government is looking to adjust its economic growth target due to global challenges. Deputy Prime Minister Somdy Duangdy said the government is unlikely to achieve the 7% growth target. In 2017, the GDP was at 6.9%, but it is now estimated to decline to 6.5%. Economic analysts from the government stated that the escalating trade conflict between the United States and China has resulted in global uncertainty in trade, investment, finance. According to a recent report by the Asian Development Bank (ADB), Laos economic growth is set to moderate in 2018 because sectors such as mining and agriculture are expected to underperform.

Bangkok is the top destination for international overnight visitors in 2017
(28 September 2018) The seventh annual Mastercard Global Destination Cities Index (GDCI) ranked Bangkok as the No.1 global destination city for international overnight visitors in 2017, the fifth time in six years. Phuket and Pattaya were listed in the global top 20 destination cities at 12th and 18th positions, respectively. With 20.05 million international overnight visitors in 2017, Bangkok edged out London with 19.83 million visitors. Thailand’s Tourism and Sports Ministry projected that 37-38 million foreigners would be travelling to the country in 2018 and it is expected to generate US$61.8 billion in tourism revenue. According to the ministry, in the first eight months of 2018, 25.88 million foreign tourists visited Thailand, a 9.9% increase from the same period last year, generating US$41.7 billion, an increase of 12.9% year-on-year.