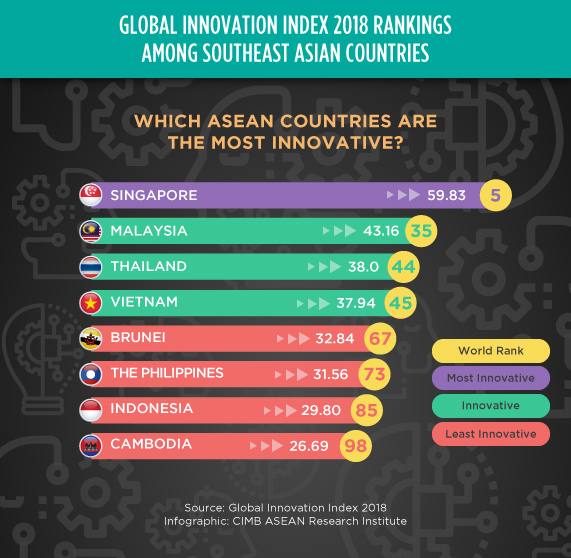 Singapore is the most innovative nation in Southeast Asia, according to the Global Innovation Index 2018
(16 September 2018) The Global Innovation Index 2018 report ranked Singapore as the most innovative nation in Asia. The report examines the energy innovation landscape and recognises potential breakthroughs in areas such as energy production, storage, distribution and consumption. In the report, Southeast Asia is ranked third globally in terms of innovation and Singapore is the best in the region with an index score of 59.83 and scored well in most of the indicators. Malaysia is the second best with a score of 43.16 as it showed progress in indicators such as Tertiary education, Knowledge diffusion, and Creative goods and services. Thailand is ranked third among the Southeast Asian countries with an index score 38.00 while Vietnam is the next in fourth with 37.94 followed by Brunei Darussalam (32.84), the Philippines (31.56), Indonesia (29.80) and Cambodia (26.69).

Manufacturing in ASEAN gains speed as China’s growth slows down
(20 September 2018) The Japan Centre for Economic Research reported that manufacturers in five key Southeast Asian countries such as Indonesia, Thailand, Malaysia, the Philippines and Singapore had increased production as rising labour costs in China have pushed firms to set up bases in the region. Based on the manufacturing production index data produced by the research centre, the year-on-year growth of five main Southeast Asian countries was at 6.2 per cent as a weighted average for the January-June period. China’s year-on-year growth was recorded was at 6.9 per cent. However, robust exports and domestic demand are improving the manufacturing sector in the region, and this situation could see the five key ASEAN nations going past China in manufacturing activity.

Report claims Cambodia as one of the four recent outperforming economies in Southeast Asia
(21 September 2018) Cambodia has been labelled as one of the fastest developing economies in Southeast Asian by global consulting company McKinsey and Company. Together with Laos, Myanmar and Vietnam, Cambodia has been one of the outperformers by achieving faster and consistent growth rate over other nations. According to the McKinsey report, seven markets exceeded its real annual per capita GDP growth of 3.5 per cent in a 50-year period, and the best performing regions are East and Southeast Asia. The increase is due to the significant economic achievements of seven long-term outperformers – China, Hong Kong, Indonesia, Malaysia, Singapore, South Korea and Thailand and recent outperformers. The report also states that recent outperformers such as Cambodia and Vietnam are still “work in progress” and will have to work on improving productivity, income and demand. The recent growth of outperformers is due to the development of pro-growth schemes across public and private sectors, which is meant to raise productivity, income and demand.

New tariff duty by the U.S on China weakens Rupiah
(18 September 2018) Indonesia’s Central Bank reported that the drop in Rupiah values against the U.S dollar is due to the 10 per cent import tariff imposed by the U.S on Chinese goods. Its President Donald Trump announced that the U.S. would impose the duty beginning on September 24, 2018. Bank Indonesia’s (BI) Deputy Governor Dody Budi Waluyo reiterated that the central bank would intervene in a measured exchange rate. He said the central bank would hold a Board of Governors` Meeting (RDG) from September 26 to 27 to decide on a stabilisation policy. On September 18, BI fixed the middle rate at Rp14,908 per US dollar, down 49 points or 0.32 per cent from the position of Rp14,859 on September 17.

Vietnamese seafood exports to ASEAN nations expected to hit US$1 billion
(12 September 2018) The ASEAN+3 Macroeconomic Research Office (AMRO) reported that Cambodia’s economy is expected to continue its robust growth momentum in 2018, aided by increased infrastructure activities, better prospects for garment manufacturing and better growth in tourism. Cambodia’s economy is expected to grow at 7.2 per cent in 2018, better than the 7 per cent in 2017, while inflation stays low and stable. A statement from AMRO noted that higher government spending because of increasing public investment and public sector salary would only boost growth in 2018. Cambodia’s external position is improving due to increased foreign direct investment (FDI) inflows, which covers the current account deficit. Cambodia’s overall balance remains in surplus, which has led to a rise in foreign reserves from US$6.7 billion in 2016 to US$8.8 billion in 2017.

Singapore is the second best city in Asia for tech firms to establish operations
(20 September 2018) Singapore has been rated as one of the best cities for technology firms to develop operations in Asia. According to a report by Colliers International, a global commercial real estate services firm, Singapore is the second best city among 16 other Asian cities. The rankings were made based on socio-economy, property and human factors. Singapore scored 63 per cent due to the country’s favourable talent pool, personal tax rates, safety and living standards. However, Singapore did not fare well in the property metrics indicator. Bangalore, India was the best city with a score of 68 per cent while Shenzhen, China was in third with a score of 61 per cent.

Thai government urges exporters to take advantage of AFTA
(19 September 2018) Thai companies are encouraged by Thailand’s Department of Free Trade to utilise the tax incentives given under the ASEAN Free Trade Agreement (AFTA). The department aims to raise the percentage of Thai firms tapping into AFTA tax incentives to 70 per cent in 2018. In 2017, the percentage was at 63.04 per cent. In 2015, the total value of Thai exports that made use of the AFTA tax incentives was at US$19.46 billion, and in 2017, it increased to US$23.8 billion. However, more Thai companies could potentially benefit from AFTA tax incentives as the total value of exports was US$37.76 billion in 2017.

The Philippines’s balance of payments hits surplus for the first time in 2018
(20 September 2018) The Philippines’ Central Bank Bangko Sentral ng Pilipinas (BSP) said the country’s balance of payments (BOP) position reached a surplus for the first time in 2018. According to BSP’s data, the country’s BOP surplus was at US$1.272 billion in August. Last year, the BOP surplus in August was US$7 billion. The central bank also confirmed that the August 2018 BOP surplus was the largest monthly surplus since January 2013. The reason for its resurgence is due to net foreign currency deposits of the Philippines’ government and revenues from BSP’s overseas investments in August.

Weakened Kyat value affects Myanmar’s economic and trade balance
(20 September 2018) Myanmar is experiencing and trade and economy imbalance because of its current account deficits as imports have surpassed exports. Also, the strengthening of US dollar since April has weakened the Kyat. Other factors that influence the exchange rate of Kyat are current account deficit, interest rates, inflation and economic prospects. Domestic factors also play a role in the exchange rates if a country has weak economic fundamentals and structural problems. Trade deficits have also depreciated the Kyat, and according to figures reported by Eleven Myanmar, the trade deficit was US$ 3.8 billion in the financial year of 2017- 18, US$ 5.2 billion in 2016-2017 and US$ 5.4 billion in 2015-2016.