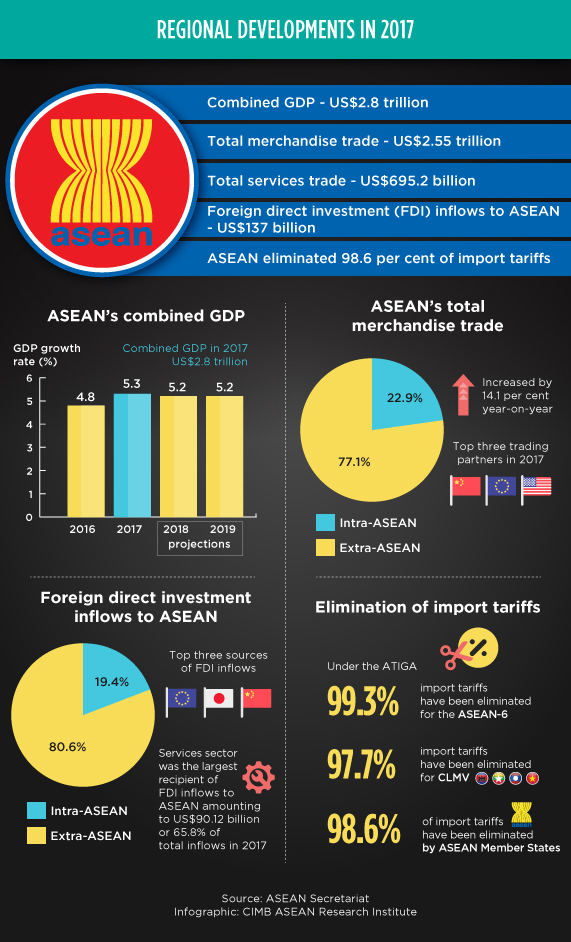 ASEAN economic ministers signed two agreements to reduce trade barriers
(27 August 2018) ASEAN Economic ministers signed two agreements to enhance the integration of the services sector and trade facilitation within the region. The agreements included the 10th package of commitments under the ASEAN Framework Agreement on Services (AFAS) which would allow for the deepening of commitments and the widening of market access for the services sector. This conclusion of the final package would facilitate regional service providers’ participation in sectors that were previously closed including logistics, air and maritime transportation. In addition, a protocol was signed to amend the ASEAN Trade in Goods Agreement (ATIGA) to enable the implementation of the ASEAN-wide self-certification (AWSC) regime. This measure would allow certified exporters to self-certify the origin of their goods and to enjoy preferential treatment under the ATIGA.

Violators of foreign banknotes regulation would be fined in Indonesia
(3 September 2018) With the enforcement of Bank Indonesia Regulation (PBI) No.20/2018 on the revision of PBI No.19/7 2017 effective 4th September, only licensed entities such as banks and money changing institutions would be allowed to carry foreign banknotes of more than US$1 million. Violators would be required to pay a penalty of up to 10 percent of the total amount of foreign banknotes held, up to a maximum fine of US$20,299. The BI has an information technology infrastructure to process the licensing of the import and export of foreign currencies, as part of the Indonesia National Single Window (INSW) which would monitor the import and export of limited goods.

Lao’s Central Bank issued warning against the use of cryptocurrencies
(3 September 2018) The Bank of Laos (BOL) issued a public warning about the risks of using cryptocurrencies as instruments for payment, trading and investment. Specifically, Lao regulation would not provide for the recognition and regulation of cryptocurrencies. As such, according to a senior central bank official, these currencies would not be considered as valid instruments to service debt. Despite the official notice, there has not been as yet an official ban on cryptocurrency trading domestically while its use as payment instruments have been accepted by some companies for trading in goods and services.

Malaysia and Singapore agreed to defer the High-Speed Rail project until 2020
(3 September 2018) Singapore and Malaysia agreed to postpone the construction of the Kuala Lumpur-Singapore High-Speed Rail (HSR) project until 31 May 2020. Malaysia would pay Singapore S$15 million by January 2019 for the deferment and be deemed liable for additional sums should the project not resume in two years. If construction were to start by May 2020, the rail link service could commence by January 2031.

Myanmar to open bid for oil and gas fields in 2019
(31 August 2018) The tender for Myanmar’s offshore and onshore oil and gas blocks would be opened in the first half of 2019, the first time to be held under the current government. State-owned Myanmar Oil and Gas Enterprise (MOGE) would invite international tenders for oil and gas exploration as well as drilling and production activities in unoccupied onshore and offshore blocks in partnership with foreign oil companies. Projects would be awarded under the Production Sharing Contract (PSC) and Improved Petroleum Recovery Contract arrangements.

Facebook to invest more than US$1 billion in Asia’s first data centre in Singapore
(6 September 2018) Facebook announced it would invest more than US$1.4 billion to build its first Asian data centre in Singapore. Located at Tanjong Kling (formerly known as Data Centre Park) in the western part of the island, the 170,000 square metre facility would be expected to generate employment opportunities and other positive spillover effects. According to Singapore’s Minister of Trade and Industry, the establishment of the centre would facilitate the inflow of talents and creativity and in strengthening its data storage capacity and would augment its strengths in data protection, intellectual property, data security and data analytics. The data centre is scheduled to start operations in 2022.

Pressure on the Bank of Thailand to increase interest rate amid rising inflation
(3 September 2018) In August 2018, inflation increased to a four-year high of 1.6 percent in Thailand amid rising food and energy costs. At 1.5 percent, the policy rate would be below inflation, fuelling expectations of the first interest rate hike by the Bank of Thailand (BoT) since 2011. Despite this development, the BoT Governor, Veerathai Santiprabhob said that Thailand did not face immediate pressure to tighten monetary policy. Similarly, the Bank Indonesia would face pressure to increase interest rate given the rupiah’s weakening by about 8 percent against the U.S. dollar this year.

Vietnam to lift barriers on rice exports
(1 September 2018) Following a new Decree 107/2018/ND-CP which will take effect Oct 1st, Vietnam government would no longer require rice exporters to own rice storage, paddy milling and grinding facilities with processing capacities of 5,000 tonnes of rice and 10 tonnes of paddy per hour. Instead, rice traders could now rent the facilities and not be limited by the need to meet volume requirements. In addition, organic rice, parboiling rice and multi-micronutrient fortified rice traders could now be exported to foreign markets without the need to produce a certificate of eligibility for rice export business.

Vietnam has the highest growth of international visitors in Southeast Asia in 2017
(3 September 2018) According to the World Tourism Organization, Vietnam saw the highest growth in international arrivals in Southeast Asia in 2017. In 2017, the number of foreign visitors to Vietnam was 12.9 million, a 29.1 percent increase from 2017. Myanmar (18.4 percent) and Brunei (18.3 percent) also recorded a significant increase in tourist arrivals last year. However, Vietnam’s revenue from tourist arrivals was at US$8.86 billion, a mere 7.4 percent increase from the previous year. In contrast, at 35.4 million, Thailand has the highest international tourist arrivals in ASEAN in 2017, which generated US$57.5 billion. Southeast Asia received a total of 120.4 million visitors last year.