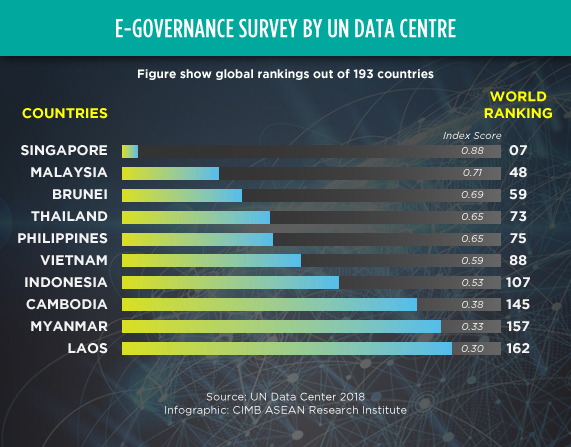 Singapore has the best e-governance in Southeast Asia
(8 August 2018) A survey conducted by the United Nations (UN) Data Centre showed that Singapore is most effective in e-governance in Southeast Asia with an index of 0.88. According to the report, the country’s usage of smart technology to disseminate environmental data with the public and government are one of the many e-governance programs that led to it being the best in Southeast Asia and seventh best in the world. The survey identifies e-government effectiveness in public services and monitors patterns in e-government development and performance. Malaysia is ranked second among Southeast Asian nations with a score of 0.71 and ranked 48th in the world. Brunei showed significant improvement as the nation improved its ranking of 83 in 2016 to 59 in the world with an index score of 0.69. Thailand is next with an index score of 0.65 followed by the Philippines, also with 0.65. Index scores for Vietnam and Indonesia were 0.59 and 0.53 respectively, while Cambodia’s index was 0.38. Myanmar and Laos were the lowest ranked in the list with an index of 0.33 and 0.30 respectively. According to the report, utility payment, submitting income taxes and filing on new businesses are the most used online services in 2018.

The Central Bank of the Philippines and Bank Indonesia (BI) cooperate to combat financial crimes
(6 August 2018) The central bank of the Philippines, Bangko Sentral Ng Pilipinas (BSP) and Bank Indonesia (BI) inked an agreement to fight terrorism financing and money laundering in both countries recently. The agreement was signed by BI Governor Perry Warjiyo and BSP Governor Nestor A.Espenilla Jr. as both banks work together to integrate policies to execute the anti-money laundering and terrorist financing regulations in both countries, in particular for payment systems and financial transactions. The cooperation between the two countries will take place in the form of policy dialogues, information and data exchange, in addition to human resource development.

Vietnam seafood exports rake in US$4.63 billion in the first seven months of 2018
(5 August 2018) Vietnam’s Ministry of Agriculture and Rural Development (MARD) announced that the country’s export value rose 6.3 percent compared to the same period in 2017, recording exports worth US$4.63 billion in the first seven months of 2018. Countries, namely the United States, Japan, China and South Korea were the biggest importers, accounting for 53.5 percent of the total value. According to the ministry’s Department of Produce Processing and Market Development, the US’ decision to impose 10 percent tariff on all Chinese exports and China’s response to enforce a 25 percent tariff on aquatic products from the US will allow Vietnam to increase its exports to both these countries. MARD reported that Vietnam’s total seafood output in 2016 was more than 7.2 million tonnes.

Cambodian rural area to be revolutionised by India’s digital village
(8 August 2018) India will promote technology and improve the agricultural sector in Cambodian rural areas by establishing a digital village. India’s Ambassador to Cambodia Manika Jain announced the initiative after a discussion with Cambodia’s Minister of Post and Telecommunications Tram Iv Tek. India’s Telecommunications Consultants India Limited (TCIL) will supervise the project, and the firm has chosen Traing district in Takeo for the project. TCIL will build an ICT centre in the district for people to look for the latest information on agriculture and farming tips. Traing will be the pilot project and expansion to other areas will rely on the progress of the pilot project.

Myanmar government urges tourism investors to tap the country’s improving tourism sector
(6 August 2018) Myanmar’s Union Minister of Hotels and Tourism U Ohn Maung said the nation is looking to expand its tourist attractions and is willing to work with any investors, who have feasible and valuable ideas. He said the country’s new investment laws have been relaxed and some countries are benefiting from the ease of Visa regulations by Myanmar. According to the Union of Myanmar Travel Association, the country is projecting a further 22 percent increase in international arrivals in 2018, from 3.4 million visitors in 2017. Known for its cultural heritage tourism, Myanmar now intends to tap into community-based tourism and ecotourism, and under the country’s Tourism Master Plan 2013-2030, it looks to focus on sustainable development by preserving environmentally-sensitive places, and encourage tourists to respect ethnic groups.

State-linked attackers behind SingHealth cyber attack
(6 August 2018) Singapore’s Minister for Communications and Information S. Iswaran in a statement to the country’s parliament said the attack on SingHealth’s IT database in June was made by advanced persistent threat (APT) group who are usually state-linked. The attack billed as the worst breach of personal data in the country’s history, is not the only APT attack Singapore has seen as there was an attack on the National University of Singapore (NUS) and Nanyang Technological University (NTU) in 2017. The Cyber Security Agency of Singapore (CSA) conducted a thorough analysis of the cyber attack and found that an APT group is behind the attack. According to Iswaran, the attacker utilised advanced tools, which includes customised malware, to breach SingHealth antivirus software and security tools. Singapore government is taking precautionary measures to improve its cybersecurity defences, and it has notified 11 key sectors to solidify security around its networks.

Disasters have cost Laos US$55.3 billion in the last eight years
(8 August 2018) A report from the National Ad Hoc Committee in charge of dealing with the aftermath of the deadly flood in Sanamxay district, Attapeu province revealed that various disasters in Laos have seen 108 deaths and the country’s infrastructure losses amounted to US$55.3 billion from 2010 to 2018. The committee recorded disasters such as storms, flooding, drought, fires, disease and insect outbreaks damaging plants in the country. The committee acknowledged that the impact of global climate change has led to several natural disasters in the country. In 2018, Laos were impacted by storms especially tropical storm Son-tinh, which ravaged 11 provinces in July and caused flooding in nine areas. The collapse of the dam in Sanamxay district in Attapeu province on 23 July 2018 flooded 12 villages, with six communities wiped out.

Malaysia to search for new markets for palm oil
(7 August 2018) Malaysia’s Ministry of Primary Industries is looking for new markets for palm oil through good relations with several countries as the country aims to counter anti-palm campaigns. Malaysia is looking to penetrate into the Philippines, Iran, Turkey and West African nations and also maintain its existing relations with primary markets through the Malaysian Palm Oil Council (MPOC). The industry has been criticised due to its links to deforestation and haze in Southeast Asia. The European Parliament also came up with a non-binding resolution in April 2018, which would only permit imports of environmentally sustainable palm oil into the European Union after 2020.

GISDA assures that purchase of THEOS-2 satellite is transparent
(8 August 2018) Thailand’s Geo-Informatics and Space Technology Development Agency (GISDA) said there are no irregularities in the purchase of Thailand Earth Observation Satellite (THEOS) 2 satellite, The agency dispelled the rumour and told the public that the purchase was conducted transparently. The acquisition of the satellite was made through International Competitive Bidding (ICB), which gives an equal chance to all bidders. THEOS 2 will be replacing the Thaichote, Thailand’s first ever earth observation satellite. The Thaichote, also known as the first THEOS satellite, was launched into space in 2018 and will be deactivated soon.