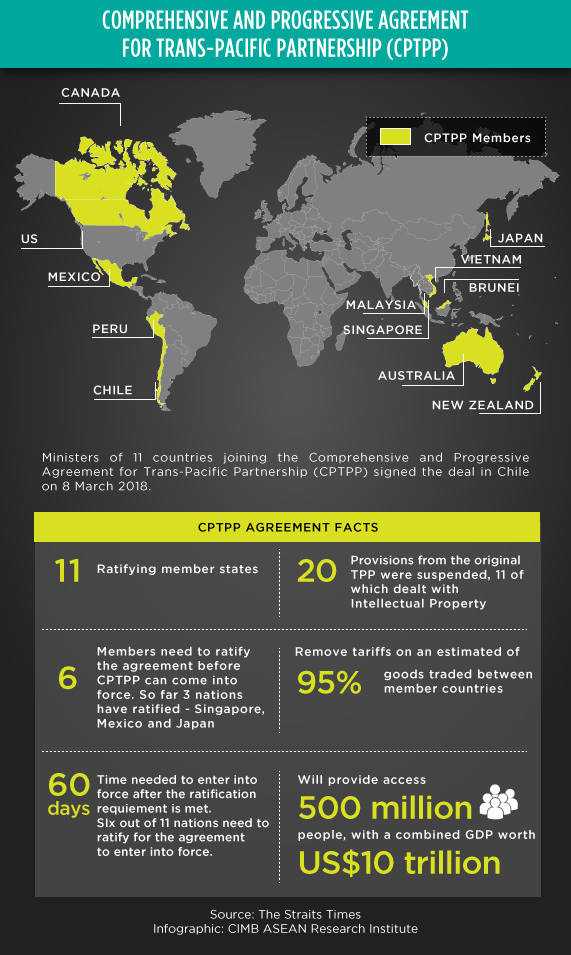 Singapore becomes the third nation to ratify CPTPP
(20 July 2018) Singapore is the third country after Japan and Mexico to ratify the Comprehensive and Progressive Agreement for Trans-Pacific Partnership (CPTPP). Singapore’s Prime Minister Lee Hsien Loong said the trade pact signifies the country’s commitment to upholding free trade and a rules-based trading system. The CPTPP, which is the revised trade agreement of the original Trans-Pacific Partnership (TPP) after the United States pulled out from the original agreement in January 2017, will promote trade in a combined market of 500 million people with a gross domestic product of US$10 trillion. Mexico was the first nation to ratify the agreement in April 2018 followed by Japan on July 6, 2018. The other countries part of the agreement are Australia, Brunei, Canada, Chile, Malaysia, New Zealand, Peru and Vietnam.

Singapore prompts India to finalise RCEP with ASEAN
(19 July 2018) India has been prompted to conclude the Regional Comprehensive Economic Partnership (RCEP) agreement to counter the escalating global trade war. Singapore’s Foreign minister Vivian Balakrishnan acknowledged that India and ASEAN would gain from the agreement as the combined gross domestic product (GDP) of India and the bloc is at US$3.8 trillion-US$4.5 trillion. ASEAN, India, South Korea, China, Australia, New Zealand and Japan started discussions in 2013 on the RCEP, which encompasses trade in goods, trade in services, investment, economic and technical cooperation, intellectual property, competition, dispute settlement and e-commerce. However, the pact has been delayed due to India’s hesitance to open its market to China. India has a high trade deficit of US$63 billion in 2017-2018 with China. Many nations want market access to India of up to 92 percent of its traded goods, but India is only prepared to open market access up to 85 percent of goods with different terms for China, New Zealand and Australia with whom the country does not have trade deals with.

(19 July 2018) The Malaysian government will increase oil royalties for oil-producing states from five percent to 20 percent. The country’s Prime Minister Tun Dr Mahathir Mohamad assured the parliament that the federal government would pay 20 percent royalties to all states including Sabah and Sarawak. The East Malaysia states had previously received 5 percent oil royalties while Terengganu and East Coast states Terengganu and Kelantan were given “compassionate funds”. In Dr Mahathir’s coalition manifesto, it said that royalty payments to oil-producing states would be increased so that the states can take over and channel funds on the states’ development plans.

VLaos dam collapse uncovers frailties of dam projects
(25 July 2018) The dam collapse in Southern Laos, which has affected thousands of Laotians, has revealed weaknesses of the sudden surge of dam constructions in the country. The communist state is constructing dozens of dams to sell energy to its neighbours namely Vietnam, Cambodia, China and Thailand to ensure that the nation comes out of poverty. According to Laos News Agency, the country now has 46 operating hydropower plants generating 6,400 MW of energy and another 54 is being built and will go online in 2020. The International Energy Agency reported that about 85 percent of the electricity produced in Laos is mostly exported, primarily to Thailand where two-thirds of the resource is used up by Thailand’s capital Bangkok. However, these projects impact local communities as people will have to move out of their villages and landscapes, and river systems in the country would be affected. A report from the Mekong River Commission estimated that the projects could damage up to 40 percent of fish species in the Mekong River basin.

Southeast Asian nations see increased adoption of Artificial Intelligence (AI) in 2018
(26 July 2018) A survey conducted by international IT market research firm IDC reports an increase in the adoption of artificial intelligence in Southeast Asia. The study titled, The IDC Asia/Pacific Enterprise Cognitive/AI survey, is a biyearly study that aims to learn about adoption trends, barriers and business preferences. A total of 502 executives and IT line-of-business including 146 respondents from Southeast Asia nations namely Singapore, Malaysia, Indonesia, Thailand were interviewed for the survey. Based on the firm’s survey, AI adoption rates are at 14 percent over the region in 2018, compared to eight percent in 2017. The percentage increases show that firms in the region are beginning to include some form of AI into operations. Other growth enhancers in 2018 are improved process automation at 51 percent and enhanced productivity at 42 percent. Among the ASEAN nations, Indonesia is at the top when it comes to adoption with 24.6 percent of its organisations embracing AI.

Bac Lieu LNG fueled power plant project to address Vietnam’s power shortage
(26 July 2018) Vietnam’s Prime Minister Nguyen Xuan Phuc mentioned that the Mekong Delta Region is suitable for liquefied natural gas (LNG) projects and a new project in the region will address the country’s future power supply shortage. In a meeting held on 25 July 2018, he welcomed investors of the country’s US$4 billion LNG powered project in the Mekong Delta province of Bac Lieu. The project is scheduled to start running in late 2021 and expected to generate 3,200 MW of energy. In May 2017, the U.S. based Energy Capital Vietnam inked a Memorandum of Understanding (MoU) with Bac Lieu authorities for the building of the LNG-powered project. According to Fitch Ratings, electricity usage in Vietnam will increase at an average rate of nine percent every year.

Thailand’s E-Commerce market to see 8.5 percent growth in 2018
(25 July 2018) The continuous growth of social commerce would increase the value of Thailand’s E-Commerce to US$91.6 billion in 2018, an increase of 8.5 percent since last year. According to the Thailand Electronic Transactions Development Agency (ETDA), the country’s e-commerce market value in 2017 was US$84 billion. ETDA recorded that the market value of business-to-consumer (B2C) e-commerce in the country is ranked the highest in Southeast Asia at US$23.33 billion in 2017. The top three areas that recorded the most significant value in 2017 were wholesale, accommodation and manufacturing.

Singapore is the top ASEAN nation in World Bank’s trade logistics rankings
(25 July 2018) Singapore was the top Southeast Asian in World Bank’s trade logistics ranking at the seventh spot. In the biyearly World Bank report titled “Connecting to Compete 2018: Trade Logistics in the Global Economy”, Singapore’s Logistics Performance Index (LPI) score was 4.00. Even though Singapore did better than most of its ASEAN counterparts, in 2016, the nation fared better as it was ranked fifth and had better LPI score of 4.14. The World Bank noted that the index reviews six aspects namely customs, infrastructure, international shipments, logistics quality and competence, tracking and timeliness. Thailand was ranked 32nd with an LPI score of 3.41 while Malaysia was placed at 41st with a score of 3.22. Vietnam also showed vast improvement as they jumped from 64th to 39th with an LPI score of 3.27. Indonesia was ranked 46th with a score of 3.15, an increase from 2016 where the country was ranked 63rd with a score of 2.98. The Philippines and Laos were ranked 60th and 82nd respectively, with LPI scores of 2.90 and 2.70 respectively.

Regions in Kachin and Shan State provisionally selected as China-Myanmar border economic zones
(26 July 2018) Myanmar’s Union Minister for Commerce Dr Than Myint announced that Kampaikti region in Kachin State and Muse and Chinshwehaw regions in Shan State would be the provisional regions selected for the China-Myanmar border economic cooperation zones. The zones are part of the Belt and Road Initiative (BRI) and also the Myanmar-China Economic Corridor. The creation of the economic zones would help stimulate local and foreign investments, generate business and job opportunities for locals, help expand the SMEs in the country and enhance production capacity. An agreement to build the border economic cooperation zones was agreed in August 2016 during State Counsellor Aung San Suu Kyi’s visit to China.