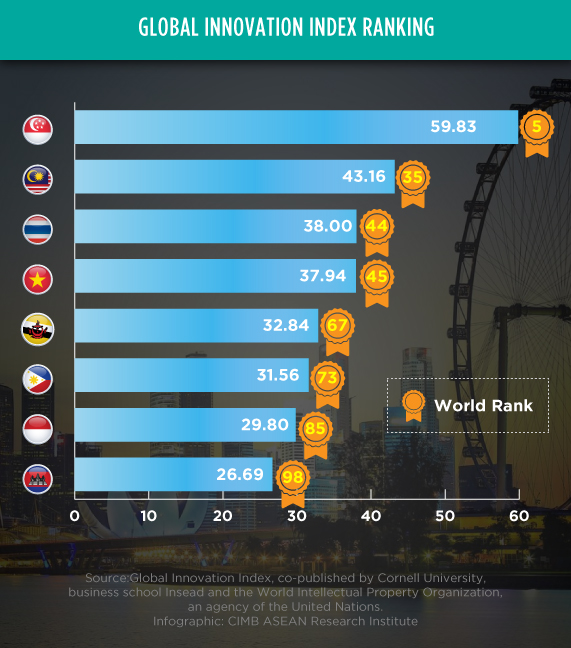 Singapore reaches top five in Global Innovation Index
(11 July 2018) Singapore broke into the top five list of the Global Innovation Index 2018 for the first time after its seventh ranking in the 2017 index. The index, calculated from 80 different indicators, exhibits each country’s expertise to innovate new technologies, and put them to use. The report was co-published by Cornell University, business school Insead and United Nations’ agency, the World Intellectual Property Organization. The country’s rankings improved after scoring high in indicators such as government effectiveness and foreign direct investment outflows. The index shows ASEAN nations have improved in innovation and socio-economic development indicators. Malaysia and Vietnam moved up two positions from the previous index to 35th and 45th respectively while Thailand showed great progress going seven spots to reach 44th in 2018. Malaysia showed significant improvement in most indicators namely human capital and research, infrastructure and business sophistication. Among all the countries in the region, Vietnam was ranked first in expenditures on education and trademarks by origin while Thailand topped the high tertiary enrollment indicator.

The Competition and Consumer Commission of Singapore (CCCS) proposes fines and cancelling Grab’s acquisition of Uber
(6 July 2018) The Competition and Consumer Commission of Singapore (CCCS) threatened to hit penalties on cab-sharing providers Grab and Uber after the commission deemed that Grab’s acquisition of Uber is a breach of competition laws. CCCS also said the merger could be cancelled as the alliance has brought down competition and led to increased fares. The watchdog also said that both entities did not inform authorities about the merger. Uber and Grab have 15 working days to submit proposals to settle the issue to the CCCS. However, Grab has said that the company opposed the commission’s statement and would appeal the measures proposed by the watchdog.

Indonesia to send a team to Washington to continue GSP Facility
(9 July 2018) The Indonesian government will send a group of lobbyist to Washington in response to the United States’ decision to review the eligibility of the Generalised System of Preference (GSP) facilities on the country in April. Oke Nurwan, director general for foreign trade at Indonesia Trade Ministry said that the team will negotiate for the imposition of the GSP facility to be continued. Indonesian exports to the United States comprises of textile, furniture and timber which altogether stands at about US$17.8 billion annually.

Vietnam’s export reliance on Chinese market rising
(8 July 2018) The Chair of Vietnam Association of Seafood Exporters and Producers (VASEP), Truong Dinh Hoe said that the country exported US$2.5 billion worth of seafood in the first four months of the year, an increase of 14 percent compared to the same period in 2017. The four biggest markets include the US and Japan which accounted for 15 percent of the total, while EU and China at 14 percent. With the highest growth rate of 37 percent, China will exceed other markets to become the biggest seafood importer of Vietnam. This development has raised concern over the heavy reliance on the Chinese market not only as the biggest consumer of Vietnam’s export of raw products but also dependence on China as the biggest supplier of input materials.

Malaysia likely to miss CPTPP deadline
(11 July 2018) Malaysia may not be able to meet the February 2019 ratification deadline for Comprehensive and Progressive Agreement for Trans-Pacific Partnership (CPTPP), said the International Trade and Industry Minister, Darell Leiking. The ministry may need more time to assess the necessary laws in CPTPP, and Prime Minister Tun Dr Mahathir Mohamad will be briefed about the pact. Nevertheless, Leiking assured that Malaysia can still ratify and enforce CPTPP after the stipulated deadline. Mexico was the first country to approve the trade agreement, which replaced the now-defunct Trans-Pacific Partnership Trade agreement due to the withdrawal of the United States from the trade pact.

The Philippines to borrow US$22.4 billion to finance 2019 Budget
(9 July 2018) The government plans to borrow US$22.4 billion from external sources and domestic market, partly to finance next year’s budget, said National Treasurer, Rosalia de Leon. She then added the borrowing program will be 20 percent higher than 2018. Also, de Leon told reporters that the Bureau of the Treasury was considering its first Euro bonds issuance in the European market. The government has promised to maintain its aggressive spending strategy which helped the domestic economy to continue at a 6.8 percent annual growth in the first quarter until 2022.

Central Bank of Myanmar to monitor the acquisition of stake by foreign banks in local banks
(11 July 2018) Myanmar’s Directorate of Investment and Company Administration (DICA) stated that the country’s central bank will scurtinise acquisitions of 35 percent stake by foreign banks in local banks. According to the Myanmar Companies Act, foreign investors are permitted to obtain stakes up to 35 percent in local establishments. However, the central bank will scurtinise the purchases as it is in charge of monitoring and scrutinising all banks. Also, the central bank will determine how to authorise foreign investors to take stakes of up to 35 percent.

Thai government calls for faster public investment as growth is slowing
(11 July 2018) Thailand’s military-led government is pushing to accelerate public investment spending which has missed expectations following the adoption of stricter procurement rules, said Deputy Prime Minister, Somkid Jatusripitak. About US$8.2 billion was spent for investment projects for the first nine months of the current fiscal year or less than half of the total budget of US$20.4 billion. The rules were introduced in the second half of 2017 to stamp out corruption in the country, which has made it difficult for bureaucrats to spend. Analysts forecast the growth for Southeast Asia’s second-largest economy to slow down from the first quarter’s figure of 4.8 percent, the best in five years.

US EXIM Bank intends to work with Cambodian Companies
(10 July 2018) Export-Import Bank of the United States (EXIM) said they anticipated to cooperate with Cambodian companies by facilitating purchases of equipment and business deals with the United States. EXIM is interested in working with Cambodia’s banking sector and bankable corporates for projects in Cambodia’s agricultural, renewable energy and healthcare industries. EXIM is a government agency that provides loan, guarantee and insurance products to aid the export of American goods. EXIM has assisted more than US$600 billion in US exports in vital industries in the US namely aviation, oil and gas exploration and heavy equipment.

Vietnam and Cambodia to expand economic growth and bilateral trade
(10 July 2018) Vietnam and Cambodia agreed for a comprehensive cooperation to expand their economic growth and bilateral trade to US$5 billion in the coming years. The bilateral trade turnover between Cambodia and Vietnam in 2017 reached about US$3.8 billion, a robust increase of 25 percent from 2016. Cambodia’s export to Vietnam reached US$1 billion, with a year-on-year increase of 40.6 percent mainly consisting timber, wood products, cashews and rubbers while Vietnam’s export to Cambodia stood at US$2.7 billion, an increase by 26.1 percent which includes of steel, iron products, oil and petrol.