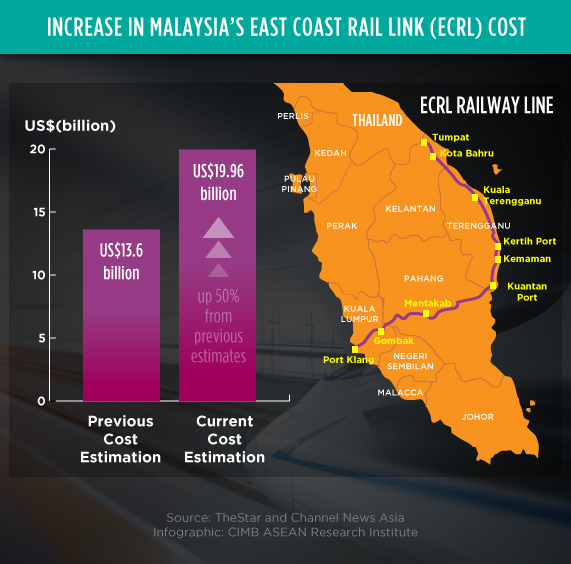 Malaysia’s East Coast Rail Link (ECRL) is expected to cost an additional 50 percent
(3 July 2018) Malaysian Finance Minister Lim Guan Eng revealed that the cost of completing Malaysia’s largest rail project could cost almost US$20 billion, which is 50 percent higher than the estimate made by the previous government. The 688 km East Coast Rail Link (ECRL) is a mainly driven by Beijing’s Belt and Road initiative to link the South China Sea in the east with the strategic shipping routes in the west. Malaysia intends to rearrange the terms of the agreement with its Chinese partners. The ECRL project, a rail line from Port Klang to Pengkalan Kubor, Kelantan, will cost US$19.96 billion (RM81 billion) after including the cost of land acquisition, interest, fees and other operating expenses from the basic cost of US$16.5 billion (RM67 billion). The project was estimated to cost US$13.6 billion (RM55 billion) initially. On 5 July 2017, the finance ministry confirmed that a work suspension order was issued to all contracts linked to the East Coast Rail Link (ECRL) and also the two pipeline projects under Suria Strategic Energy Resources Sdn Bhd (SSER).

Thailand seeking support worth US$40 billion for rail upgrade
(3 July 2018) Indonesia’s Industry Ministry estimates 10 million job opportunities will be created by 2030 due to the advent of Industry Revolution 4.0. The number of workers in Indonesia is also expected to increase up to 30 million by 2030. Therefore, it is crucial to embrace industrial revolution to overcome the issue of rising number of workers in Indonesia. Indonesia’s added value from the industry sector to gross domestic product (GDP) was ranked at fourth internationally with a contribution rate of 22 percent. The most significant contributor is South Korea with 29 percent.

Malaysian and Indonesia will join hands to fight against EU over CPO ban with Indonesia
(29 June 2018) Malaysia’s prime minister Tun Dr Mahathir Mohamad expressed the need for Indonesia and Malaysia to fight together against the European Union’s proposal to limit exports of crude palm oil (CPO) and its derivative products to the union’s member states. The reason for the restriction on CPO was due to environmental issues, and Dr Mahathir said he could not accept such an unfair policy. He believes the reason behind the ban is due to local vegetable oils namely soybean and rapeseed oil could not compete with CPO. President of Indonesia, Joko Widodo agreed to collaborate with Malaysia to fight against the issue.

RCEP looking for free trade deal by the end of 2018
(1 July 2018) Ministers from the 16 countries negotiating the Regional Comprehensive Economic Partnership (RCEP) are pushing for the conclusion of the free trade deal by the end of 2018 in order to counter protectionist policies implemented by the United States president Donald Trump as a united pact. The unilateral trade actions taken by the United States is fueling concerns about the global trade wars. The ministers are trying to narrow down unresolved points and link differences between countries which include tariff reductions, intellectual property protection, and cross-border e-commerce. RCEP negotiations started in 2013 but in the last five years, countries have only agreed two out of the 18 categories so far.

Thailand will circulate second batch of new banknotes in July
(3 July 2018) The central bank of Thailand will issue another batch of new banknotes since its first distribution on 6 April 2018. This second batch of new notes will use the picture of King Maha Vajiralongkorn, and it marks another step of transformation under his command since December 2016. Bank of Thailand’s governor announced that the circulation of the new 500 baht and 1,000 baht notes would commence after the king’s birthday, which is on July 28. The first batch of new notes was first circulated on 6 April 2018. The king’s late father King Bhumibol Adulyadej’s picture was on the country’s banknotes throughout his 70 years rule. Existing and previous series of banknotes remain legal tender.

Asian Development Bank (ADB) invests in Thai highways
(4 July 2018) The Asian Development Bank (ADB) and the Government of Thailand sealed a US$99.4 million loan deal to help Thailand enhance 125 kilometres of highways and enhance road safety management in the country’s northeastern region. The GMS Highway Expansion Phase Two project will convert Highway 22 and Highway 23 from two-lane expressways to four-lane expressways. Highway 22 is a road linking Nong Han to Phang Kon and Sakon Nakhon to Nakhon Phanom while Highway 23 is a section from Roi Et to Yasothon. In 2009, ADB assisted the phase one project, which enhanced 178 kilometres of an existing two-lane national expressway to a four-lane divided standard.

Phu Quoc Island draws investments worth US$11.6 billion
(4 July 2018) Phu Quoc Island in Vietnam is a popular investment destination for investors as the island has drawn 279 investment projects with total area of 10,754 hectares. Phu Quoc Economic Zone (EZ) management board said that out of the 279 projects, 249 had received investment endorsements with an entire area of 9,000 hectares. The registered capital for the 249 projects is US$11.6 billion. Currently, 36 projects are in operation with a total investment capital of US$634 million. Some of the projects include real estate, tourism complex, cable car and a seaport. The island is a popular tourist spot as it welcomed 1.8 million tourists in 2017, of which 300,000 are foreigners.

Cambodians can soon fly to Indonesia directly
(4 July 2018) Cambodia’s Tourism Ministry said the country will have a direct air connection with Indonesia by 2019. The ministry and Indonesia’s ambassador to Cambodia agreed on a timeframe for the formation of the new flight, which will be operated by Indonesian airline Lion Air. Cambodia’s State Secretariat Civil Aviation and the airline had conducted talks to finalise a tentative date to launch the flight. However, a spokesperson from the state secretariat of Civil Aviation said the airline is still exploring the new route to make sure there is demand for the route.

Singapore positions itself as a gateway for Indian firms to invest in ASEAN
(29 June 2018) According to Singapore’s finance minister Heng Swee Keat, the country is a good transit point for Indian firms to conduct business with ASEAN. The minister, who spoke at an event organised by the Confederation of Indian Industry (CII) in New Delhi, hopes for an advanced review to enhance the India-Singapore bilateral free trade pact called Comprehensive Economic Cooperation Agreement (CECA). Signed by both nations in 2005, the pact has seen a significant boost for trade between both countries, as it has seen an increase from US$6.7 billion in 2005 to US$16.7 billion in 2017. The minister said there are 8,000 Indian entities based in Singapore and Singapore’s foreign direct investment (FDI) in India is around US$60 billion.