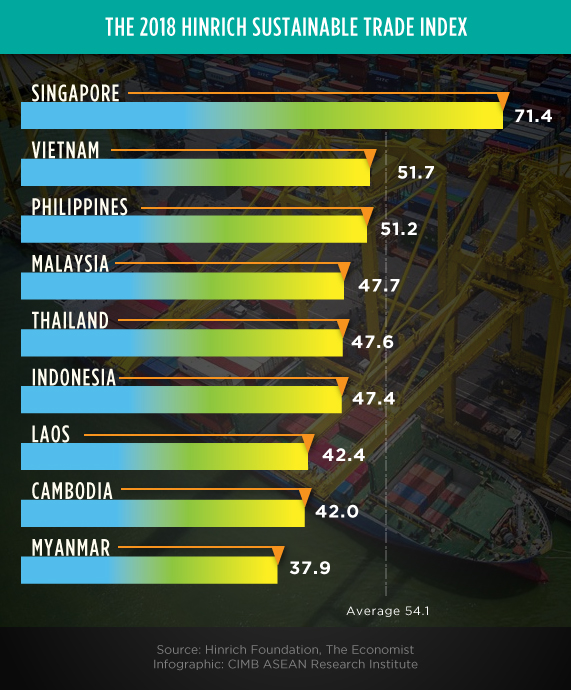 Singapore falls two places down in the 2018 Sustainable Trade Index
(27 June 2018) Singapore fell to the third place in the 2018 Hinrich Sustainable Trade Index, which was put together by the Economist Intelligence Unit, after topping in the same index in 2016. The Index looks at 24 indicators to evaluate the readiness of each economy to participate in global trade with regards to ways that create sustainable growth, encourage foreign direct investment, and attract funding and support from multilateral development agencies. Singapore’s ranking dipped due to low scores on the environmental pillar but topped the economic pillar scores. Singapore scored 71.4 points in the index and is ranked top among Southeast Asian countries. Vietnam was the second top ASEAN nation in the list with 51.7 followed by Philippines 51.2 in third. Malaysia is ranked fourth with 47.7. The latest trade index saw Hong Kong ranked first with 73.7 points followed by South Korea with 73.3.

Japan plans to build Japanese industrial hub in Indonesia
(25 June 2018) Japan and Indonesia are in talks on the expansion of Indonesia as a Japanese industrial hub during the sixth Strategic Dialogue between both nations. Japan looks to explore the possibilities of Indonesia becoming a production base for Japanese products. At the same time, both parties signed the Exchange of Notes on Integrated Marine and Fisheries Centers and Fish Market to strengthen collaboration in expanding fishery centers in Indonesia. The ministries also promised to synergise Indonesia’s Indo-Pacific concept with the Free and Japan’s Open Indo-Pacific Strategy (FOIPS). Data from the Foreign Ministry showed that Japan was the second largest country to invest in Indonesia, with investments up to US$5 billion.

Thailand seeking support worth US$40 billion for rail upgrade
(25 June 2018) Thailand is seeking support worth US$40 billion from private investors to upgrade the country’s rail network to dual-track rails, as the nation looks to reduce logistics cost and improve its trade sector. Upgrades worth US$3.7 billion have been approved by the government while another nine upgrades worth US$12.2 billion will be approved in 2018. There is also a joint 672 km railway project with Japan, which will cost US$12.6 billion and the project is expected to start in 2020. There is also a 355 km high-speed rail link connecting central and northeastern Thailand with Laos plan, which will cost US$5.4 billion. The project was planned with China and tender process for it will take place before end of 2018.

Export of forestry products hit US$4.15 billion in 2018
(25 June 2018) The export of forestry products from Vietnam rose about 8.4% in 2018, reaching 46% of the yearly target to hit US$4.15 billion. United States, China, Japan and the Republic of Korea were the largest importers of the products. The improvement is due to the restructuring of the forestry sector with a wide range of high-value production models as well as an expansion in the domestic wood market. Also, nearly 3,500 private and foreign direct investment businesses expanded its forestry products and exported to 100 different countries globally. In-depth cultivation models are being largely applied in Vietnam to boost the productivity and the quality of forests.

FDI to Vietnam reach US$20.33 billion in six months
(27 June 2018) Foreign direct investment (FDI) reached US$20.33 billion in the first six months of 2018, up by 5.7% year-on-year. Vietnam’s Ministry of Planning and Investment stated that 1,366 new projects have been approved with total investment capital of US$11.8 billion. The ministry said that about 507 existing projects have injected an additional US$4.43 billion. In the first six months also, foreign investors pumped in US$4.1 billion in capital for 2,749 projects, which was up 82.4% year-on-year. Vietnam’s 17 fields and sectors saw foreign investments, in which manufacturing and processing attracted the most capital of US$7.91 billion.

Travel ban lift by European Union will improve the tourism sector
(17 June 2018) Indonesia’s Chamber of Commerce welcomed the removal of travel ban for Indonesian airlines by European Union will have a positive impact on the aviation industry and ultimately improve the country’s tourism sector. The travel ban lift will improve connectivity and enable direct flights to Europe. Since mid-June 2018, European Commission lifted all Indonesian registered airlines from the European Union Air Safety List. The list contains the name of airlines that fail to fulfill international aviation safety standards. The removal of the travel ban is due to the recent improvements in Indonesian aviation safety aspects.

Myanmar Investment Commission (MIC) to enhance procedures for conducting business in the country
(28 June 2018) The Myanmar Investment Commission (MIC) will apply a slew of changes to reduce red tape and encourage ease of conducting business in the country. Such changes include shorten the time taken for proposal submission and reduce the time spent by the commission to approve the proposals. At the same time, MIC will collaborate with the government in establishing standard operating procedures to reduce the time taken in approving new business permits. MIC intends to attract more foreign direct investments into the country through these executions.

Malaysia intends to rearrange the water supply agreement with Singapore
(25 June 2018) Malaysia will rearrange terms of the water supply agreement with Singapore as the selling price of 3 sen per thousand gallons is not justifiable. Malaysian prime minister Tun Dr. Mahathir Mohamad said the main reason why Malaysia wants to renegotiate terms with Singapore on the Kuala Lumpur-Singapore high-speed rail project and water supply issue is to lower the country’s debt and liabilities, which is more than US$251 billion. Responding to Dr. Mahathir’s statement, Singapore’s Ministry of Foreign Affairs (MFA) stated that both countries shall fully comply with the provision of the 1962 Water Agreement and the 1965 Separation Agreement.

Malaysia intends to replace the current currency notes
(27 June 2018) The Malaysian government intends to fight corruption by substituting the current currency notes or establishing a cashless society. Malaysia’s prime minister Tun Dr. Mahathir Mohamad said replacing current currency will demonetise ringgit and remove the status of ringgit as the medium of exchange. Generally, the move is taken to tackle hyperinflation, combat corruption, remove black economy, promote the cashless society and lower dependence on hard currency. The executive director of Socio-Economic Research Centre in Malaysia said that RM50 and RM100 notes cover 84.6% of the currency in the economy. However, Bank Negara will need to bear a high printing and minting cost if the country decides to issue new notes and coins.

Collection of tax revenue exceeds US$1 billion in the first five months of 2018
(25 June 2018) Cambodia’s General Department of Taxation (GDT) reported that the government has received a higher tax revenue by 12% in the first five months of 2018 compared to the same period in 2017. The reached value exceeded US$1 billion in the first five months of 2018. Amount of tax collection in May also increased by US$ 16 million from 2017 to US$134 million in 2018. GDT has collected US$1.04 billion up to May, reaching 54% of the country’s annual target in 2018 compared. In 2017, GDT collected US$1.93 billion in tax revenue. The increment is due to a series of refinements from Tax Department such as establishing online collection platform and oversee audits of local businesses.

Indonesia looks to strengthen trade ties with Brunei
(25 June 2018) Indonesia’s newly appointed ambassador to Brunei said his country aims to deepen economic cooperation with Brunei to stabilise the trade deficit between both nations. Both countries look to improve trade growth, better investment and enhance connectivity between the neighbouring states. One of the plans is to initiate direct shipping links to the sultanate for the export of Indonesian exports instead of the re-exporting goods from there to Brunei through Malaysia and Singapore. Both nations are also discussing ways to elevate air connectivity between both nations. To help aid the Sultanate’s vision of economic diversification, Indonesia said increased trade and mutual investment between both nations would help realise that bid. Oil and gas exports make up most of the trade volume between both nation but drop in global oil prices have seen a decline in volume and gap in the trade balance.