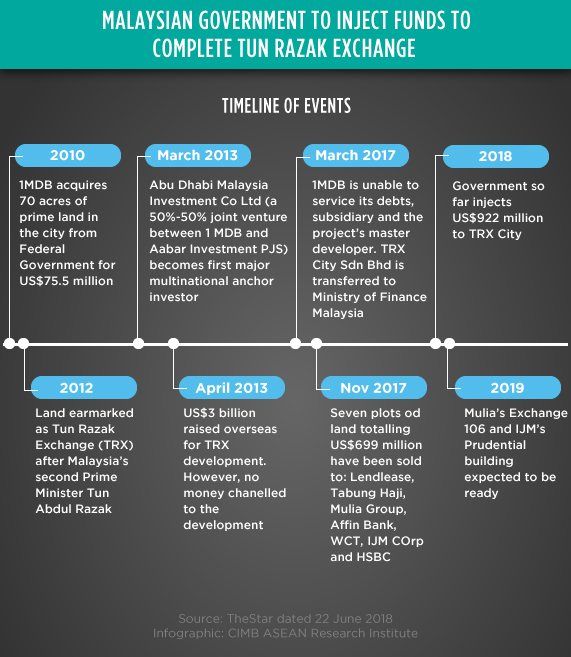 Malaysian government to inject more funds to complete Tun Razak Exchange (TRX)
(21 June 2018) The Malaysian government will continue with the Tun Razak Exchange (TRX) development by injecting more funds to see through its completion. The Finance Ministry stated that the cabinet has decided to go ahead with the project to recover all embezzled funds, repay loans, recoup all funding investments and opportunity costs. The government funding is up to US$698 million (RM2.8 billion) and the ceiling cap will be valid until 2024. Upon completion, the Finance Ministry said the project could make a small profit return. The 70-acre project at the heart of Kuala Lumpur was originally a part of 1Malaysia Development Berhad (1MDB) but it was transferred to the Finance Ministry in 2017 as the 1MDB could not fulfill its debt obligations.

France aims to raise its competitiveness in ASEAN
(19 June 2018) French business entities are seeking opportunities to develop its technology and products in ASEAN. The country seeks to be more competitive in the region as it is currently being dominated by products from Japan, China and the Republic of Korea. According to the statistics of the French Treasury, ASEAN is France’s second largest trade partner in Asia with bilateral trade rising up to 5.9% year on year (yoy), worth US$35.83 billion (31 billion EUR) in 2017. At the same time, ASEAN is also one of the key locations for French investors after China and Japan, obtaining US$18.49 billion in 2017. Estimates from the Asian Development Bank show that ASEAN would need US$3.15 trillion for infrastructure development between 2016 to 2030.

Vietnam aims to double beverage exports to US$900 million by 2035
(18 June 2018) Vietnam’s Ministry of Industry and Trade aims to reach US$450 million in beverage exports by 2020 with a total production of 4.1 billion litres of beer, 350 million litres of alcohol and 6.8 billion litres of non-alcoholic beverages before reaching US$900 million by 2035. The industry generates at least 50,000 jobs and occupies nearly 3 percent of the state budget with an expected average growth rate of 5.8 percent from the value-added of the whole industry from 2016 to 2020. Beer and non-alcoholic beverages have each formed about 20 percent of Vietnam’s FMCG sector in 2017, with total value growth of 10 percent and 7 percent respectively.

Hanoi to subsidize licenses for 71 projects worth US$17 billion
(17 June 2018) The Hanoi government will subsidise investment licenses for 71 projects worth over US$17 billion and promises to provide more incentives in the administration’s bid to become more business-friendly. Out of all the projects, 11 projects worth US$5.4 billion are foreign-invested while other 60 projects worth US$11.6 billion are local-invested. As a result, Hanoi is now the second-largest city in Vietnam to attract foreign direct investment according to the city’s mayor. Projects that will be prioritised by the city includes high tech, new technologies, clean energy, waste treatment and strengthening regional connections.

Travel ban lift by European Union will improve the tourism sector
(17 June 2018) Indonesia’s Chamber of Commerce welcomed the removal of travel ban for Indonesian airlines by European Union will have a positive impact on the aviation industry and ultimately improve the country’s tourism sector. The travel ban lift will improve connectivity and enable direct flights to Europe. Since mid-June 2018, European Commission lifted all Indonesian registered airlines from the European Union Air Safety List. The list contains the name of airlines that fail to fulfill international aviation safety standards. The removal of the travel ban is due to the recent improvements in Indonesian aviation safety aspects.

President of Philippines signs new act to ease business activities
(28 May 2018) Philippines’ president Rodrigo Duterte signed into law Republic Act No. 11032 or the Ease of Doing Business and Efficient Government Service Delivery Act, which is an amendment from the Anti-Red Tape Act 2007 to ease the process of starting up and running a business in the country. According to the combined versions from the House and Senate bills and Duterte’s speech, the main features of the law includes standardizing deadline for government transactions, use single unified business application form and establishment of a business one-stop shop, automated electronic system, zero-contact policy, as well as central business portal and Philippines Business Databank. The law is aimed to resolve the bureaucratic red tape problems and reduce waiting time for businesses.

Philippines’ Central Bank raises interest rates again due to inflation
(20 June 2018) The Bangko Sentral ng Pilipinas (BSP) increased interest rates again after inflation in the country spiked to 4.6 percent in May. The monetary board of BSP decided to increase the overnight reverse repurchase (RRP) rate by 25 basis points to 3.5 percent. BSP also pushed up interest rates on overnight lending and deposit facilities to 3 percent and 4 percent, respectively. The central bank said the increase would only lead to more savings in banks, thus easing inflation in the country, as well as discouraging taking up of bank loans. BSP had raised the interest rate for the first time in three years on 10 May 2018 by lifting the benchmark interest rate to 3.25 percent.

Cambodia’s low-hygiene standards a barrier to develop trade with China
(22 June 2018) The Chinese government said Cambodia’s poor hygiene and phytosanitary standards will be a barrier to achieving mutual trade ambitions between China and Cambodia, especially when it comes to agricultural goods. The China-Cambodia Trade and Economic Joint Committee acknowledged that steady progress has been made in trade between both nations but hygiene standards remain a technical barrier for Cambodia’s agricultural exports to the Chinese market, which includes fruits. However, the committee said China will consider increasing purchases of supplementary products from the kingdom such as rice to improve trade balance between both countries. In 2017, trade between Cambodia and China was worth US$5.8 billion, an increase of 21.8 percent year-on-year.

Sóc Trăng to garner investments worth US$5.4 billion
(9 June 2018) Thai government’s welfare and subsidy plan for low-income people is expected to fall by 13 percent to US$1.25 billion in 2019 when the increased monthly living allowance paid to career training programme participants is discontinued. From October 2017 to May 2018, US$841 million (27 billion baht) of the budget was spent. Receivers with US$934 to US$3115 (30,000 to 100,000 baht) of yearly income will receive additional US$3.11 (100 baht) per month whereas receivers with annual income below 30,000 baht will get extra US$ 6.22 (200 baht) every month once people participate in the programme. From a total of 11.4 million of welfare and subsidy plan receivers, 6.4 million are registered to participate in the programme, where 3.1 million were receivers from annual income below the poverty line. Presently, the government is spending a total of around US$128 million a month to finance the welfare scheme.