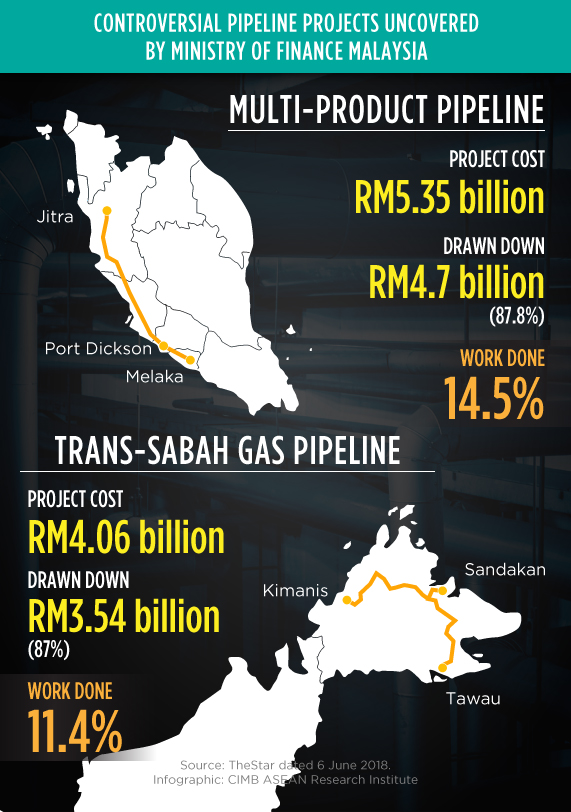 Ministry of Finance uncovers controversial billion ringgit projects previously classified and will be heading to China for negotiations
(5 June 2018) According to the Finance Ministry of Malaysia, a total of US$2.1 billion (RM8.3 billion) was paid to Suria Strategic Energy Resources (SSER) for two projects that cost US$2.36 billion (RM9.4 billion) but only 14.5 percent of the work for Multi Product Pipeline (MPP) and 11.4 percent Trans-Sabah Gas Pipeline (TSGP) were completed. This irregularity was discovered from the “red files” that were only available to selected officials previously and the agreement showed that 85 percent of the project cost would have been paid by 1 March 2018. SSER was incorporated under the Finance Ministry in 2016 to handle the two projects – MPP, a 600 km oil pipeline project worth US$1.34 billion (RM5.35 billion) and TSGP, a 662 km gas line project worth US$1.01 billion (RM4.06 billion). Both contracts were awarded to China Petroleum Pipeline Bureau (CPPB) in November 2016. Finance Ministry of Malaysia and officers from Malaysian Anti-Corruption Commission (MACC) will travel to China for negotiations on the projects.

Prime Minister introduces scheme worth multi-million U.S Dollar for poor pregnant women
(4 June 2018) Prime Minister of Cambodia Samdech Techo Hun Sen introduced a scheme that is expected to cost US$4.95 million, US$7.75 million and US$10 million in 2020, 2021 and 2022 respectively to support poor pregnant women. Under the scheme, poor mothers will receive US$40 during prenatal care, US$50 during birth delivery and US$100 during postnatal care. The move is taken to ensure that mortality rate of mothers and children will reduce in the kingdom. The scheme is planned to be executed in mid-2019 and poor families will be identified from cards issued by local authorities. Hun Sen estimated that the country had about 55,000 pregnant women a year.

Myanmar’s border trade improves between April and May in 2017-2018 financial year
(5 June 2018) According to Myanmar’s Commerce Ministry, border trade has risen US$1.165 billion between 1 April and 25 May 2018 in this financial year, marking an increment of US$196 million compared to the same period in 2017. For this fiscal year, the total amount of border trade is US$727 million for exports and US$438 million for imports. The export earnings increased by more than US$163 million whereas imports value rose by US$32 million compared to 2017. Myanmar conducts border trade with China and Thailand, cross-border trade with Bangladesh and direct trade with India.

More than 6,300 cryptocurrency mining machines imported into Vietnam in just four months
(5 June 2018) According to the General Department of Vietnam Customs, more than 6,300 application-specific integrated circuits used to mine digital currencies were imported into Vietnam in the first four months of 2018. In 2017, more than 9,300 rigs were imported into the country, mainly to cities such as Ho Chi Minh City and Hanoi. Although Vietnam does not ban cryptocurrency mining, it is not allowed to be used as a mode of payment in the country. There is also a proposal by the country’s Finance Ministry to impose a temporary ban on importing rigs in order to combat illegal activities related to cryptocurrencies. In April 2018, Vietnamese Prime Minister Nguyen Xuan Phuc signed a directive where Vietnamese credit institutions are banned from cryptocurrency-related transactions and urged to quickly report any suspicious activities.

Vietnam will not increase electricity prices to control inflation
(2 June 2018) Vietnamese Prime Minister Nguyen Xuan Phuc said electricity prices will not be increased in 2018, as it is one of the steps taken to maintain the country’s inflation below 4 percent. He also requested education and healthcare fees to be regulated at an appropriate time as well as controlling credit for manufacturing and trade. Xuan Phuc said it is not easy to secure the stability of the country’s macro-economy and maintain the inflation because of soaring oil prices in the global market. Thus, he requested the relevant departments to continue attracting domestic and foreign investment, and elevate the country’s industrial production index.

Private solar power buying gets approval from policymakers
(7 June 2018) Thai energy policymakers have once again approved a proposal to start buying solar-generated energy from private buildings and households after the programme was postponed for more than four years. Under the programme, accepted private buildings and households will sell surplus power to the country’s utilities. The programme allows households to sell solar energy, using either a business to business model or sell excess electricity wholesale to the country. Thailand’s Department of Alternative Energy Development and Efficiency is conducting some studies to draft the investment conditions, which is expected to be done by the end of 2018. The solar buying programme is focused on attaining policymakers’ vision to have all kinds of renewable energy to make up 30 percent of Thailand’s total power generation by 2036 from 10 percent at present. First introduced in 2013, the total quota of the programme was 200 megawatt (MW). Provinces like Bangkok, Nonthaburi and Samut Prakan were allotted 80 MW of the total and it was dispensed equally between private building and households.

Singapore needs to improve governance of its free trade zones (FTZs)
(7 June 2018) According to The Global Illicit Trade Environment Index, Singapore is placed 24th out of the 84 countries surveyed and it stated that the country needs to improve the governance of its free trade zones (FTZs). The index assessed government policy, supply and demand, customs environment and transparency and trade. In the first three categories, Singapore exceeded the global and Asia averages but it fared poorly in the last category, which pulled down its overall score to 71.1. In the transparency and trade category, Singapore scored 45.6, which is below the world and Asia average of 52.6. Singapore scored low in that category due to the country’s monitoring level and oversights in the FTZs, where customs officers and other law enforcers are non-existent in the FTZs In response to the index, Singapore Customs said frequent enforcement operations are being conducted to ensure tenants follow rules and regulations set by the customs. The index, which is done by the Economist Intelligence Unit (EIU) and authorised by the Transnational Alliance to Combat Illicit Trade (TRACIT), calculates how countries perform in tackling illicit goods, such as counterfeit or drugs.