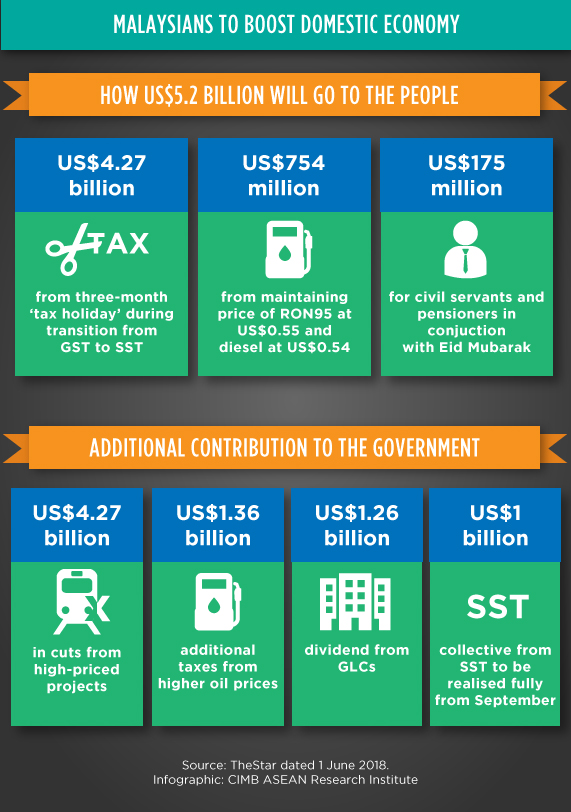 Malaysia announced measures to boost consumption and expand government fund
(1 June 2018) The Malaysian government has announced three measures to give US$5.2 billion (RM20.7 billion) into the hands of Malaysians in order to boost the country’s consumption. The measures are the zero rating of good and services tax (GST), replacing GST with Sales and Services Tax (SST) from 1 September 2018 and retaining the price of RON95 at RM2.20 and diesel at RM2.18 per litre. Malaysia’s Finance Minister Lim Guan Eng said lifting the GST will contribute US$4.27 billion (RM17 billion) and maintaining fuel prices would further release US$754 million (RM3 billion) to the people. Lim said the new administration has taken steps to ensure the budget deficit stays at 2.8 percent. Among the steps taken to expand government fund is the US$2.5 billion (RM10 billion) reduction in expenses through the delaying, review and renegotiations of certain projects such as the rehabilitation of Sultan Abdul Samad building, consulting services, promotional ventures and technology infrastructure changes. Besides the reduction, the government also expects to collect US$1.36 billion (RM5.4 billion) from petroleum taxes, US$1.26 billion (RM5 billion) dividends from government-linked companies (GLCs) and US$1 billion (RM4 billion) from SST.

Malaysia sets up fund for donation and cancelled MRT3 to reduce national debt
(30 May 2018) After the cabinet meeting on 30 May 2018, Malaysia’s Prime Minister Tun Dr Mahathir Mohamad announced that the government has set up a fund called “Tabung Harapan Malaysia” (THM) to help reduce the country’s US$251 billion (RM1 trillion) debt. Since Finance Minister Lim Guan Eng announced the country’s debt figure, many citizens have expressed their wish to contribute towards reducing the country’s debt. He said the fund will be managed systematically and transparently by the Finance Ministry. Twenty-four hours since its launch, Malaysians have so far contributed US$1.76 million (RM7 million) to the fund. Dr. Mahathir also announced that the government will cancel the MRT Line 3 project as it has high financial implications similar to the Singapore-Malaysia High Speed Rail (HSR) project. He said the cancellation of the HSR project is subject to discussions with the Singaporean government and added that the East Coast Rail Line (ECRL) is still being reviewed.

India and Indonesia to raise bilateral trade to US$50 billion by 2025
(30 May 2018) India and Indonesia are working to boost bilateral trade between both nations to US$50 billion by the year 2025. India’s Prime Minister Narendra Modi, who met Indonesia president Joko Widodo in Jakarta, said both nations have agreed to elevate their relationship to a Comprehensive Strategic Partnership and discuss ways to improve cooperation in sectors like defence, maritime security, trade and economy. According to Indonesia’s Central Statistics Agency (BPS), trade between both nations in 2016 was US$ 12.9 billion. It increased 28.7 percent to US$18.13 billion in 2017 with Indonesia’s exports to India reaching US$14.08 billion and its imports from India at US$ 4.05 billion. During the talks also, India and Indonesia agreed to work intensely to conclude the Regional Comprehensive Economic Partnership early and stressed that the partnership needs to be inclusive, just and objective to all ASEAN member states (AMS).

Singapore’s commodity trading reaches a new high in 2017
(17 May 2018) Government agency Enterprise Singapore reported that Singapore’s commodity trading reached US$20.9 billion in 2017, which is a new high for the country. Businesses there also have appointed more than 15,000 people. These developments represent a 2.7 percent compounded annual growth rate over the last five years thanks to strong demand growth from vital markets like natural gas, nickel and copper, which is pushing improved investments in commodity. The turnover for the sector last was almost US$1.2 trillion. Enterprise Singapore said the significant growth in commodity trading is due to sustainable global economy and demand from Asia. Singapore at the moment has more than 400 global, regional and local commodities firms and Singapore’s marketplace comprise 80 percent of the world’s top oil and gas, metals and mining and agricultural enterprises.

Indonesia’s central bank raised interest rate for the second time in two weeks
(30 May 2018) Indonesia has increased its interest rate by another 25 basis points to 4.75 percent and the central bank has indicated further hike in interest rate in order to improve the Rupiah value and capital outflows. New governor of Bank Indonesia Perry Warjiyo promised to develop a stable financial and economic environment in order to strengthen the country’s assets. Bank Indonesia had lowered its interest rate by a total of 200 basis points in 2016 and 2017 to encourage the country’s lending and economic growth, which remains stagnant at around 5 percent annually. However, rise in U.S Treasury yields and the strengthening of the US Dollar caused a huge drop in investors’ demand for Rupiah. The central bank raised its interest rates by 25 basis points in the middle of May, first raise since November 2014 before the second raise that happened within two weeks to strengthen Rupiah. Indonesia’s Finance Minister Sri Mulyani Indrawati said the country is ready to resort to any kind policy to support Indonesia’s economy, even if the short-term measures lead to lower growth. The Indonesian government has targeted a growth of 5.4 percent in 2018, while Bank Indonesia still expects expansion of 5.2 percent this year.

Japanese investors continue to pour in billion dollar investments in Vietnam
(31 May 2018) Being the second biggest investor in Vietnam after China, Japan is continuing to invest billions of dollars into new projects in the country. Recently, Japanese integrated trading company Sumitomo Corporation Asia agreed to collaborate with local company BRG Group to invest in the Nhat Tan-Noi Bai smart city project. It is billed as the biggest Japanese project in the country with US$4.2 billion being invested into the project. Influx of major projects has placed Japan as one of the leading investors among 116 countries investing in Vietnam. According to the Vietnamese Ministry of Foreign Affairs, as of March 2018, Japan had 3,693 projects with a total capital of US$49.84 billion. Vietnam president Tran Dai Quang’s visit to Japan from May 29 until June 2 is also expected to improve relations between both countries. According to Vietnam’s Ministry of Industry and Trade (MoIT), the country’s exports to Japan reached up to US$2.7 billion as of early March. During the same period also, the country spent US$2.705 billion on imports from Japan.

The Philippines’ poor economic competitive ranking is a wake-up call but a false alarm too, says DOF
(29 May 2018) According to the Philippines’ Department of Finance (DOF), the drop in rankings for the country’s economy global competitiveness was a cautionary call for policymakers but the department also believes that the assessment was not backed by actual data. In the World Competitiveness Ranking 2018 released by the Institute of Management Development (IMD), the Philippines was ranked 50th out of 63 economies, falling nine places compared to last year’s ranking. Based on IMD’s assessment, the country experienced the worst decline in Asia due to poor tourism, employment, education system and public finances. However, the department said the ranking assessment did not look at the dynamics of the country’s economy. Referring to government data, DOF said the unemployment rate dropped to 5.3 percent in January 2018 while international tourist arrivals to the Philippines increased by 16.1 percent to 1.4 million visitors during the first two months of 2018. However, the department said the ranking was still a wake-up call for the country’s policymakers.

China and Japan to test economic platform in Thailand
(1 June 2018) Thailand will become a testing ground to for the new Japan-China economic platform as both the economic superpowers are looking into efficient investment in ASEAN. On May 9, Japan and China inked an agreement to form an economic platform to partner in ASEAN as both nations aim to develop regional economy. According to Thailand’s Industry Minister Uttama Savanayana both nations are interested to invest in the Eastern Economic Corridor (EEC). He added that investors from both countries want to share expertise in Research and Development, Thailand’s ten targeted industries namely Automotive, Petrochemicals, Medical, Digital, Electrics and Electronics, Automation, Agro Processing, Aerospace, Tourism and Textile and EEC infrastructure. The Thai administration projects the EEC to create and generate US$43 billion (1.38 trillion baht) in economic activity from 2018 to 2023.

Investment from Japan increases since civilian rule
(29 May 2018) Japanese investors pumped in a record high of investment amounting to US$1.48 billion in Myanmar for the financial year 2017 and this increase is attributed to the country’s change from military to civilian rule in 2011. The investment amount was at an all-time high due to a large-scale commercial complex and steel producing projects. According to Myanmar’s Ministry of Planning and Finance, Japanese investment from financial year 2017 until March this year increased five-fold from a year earlier, beating the previous record of US$1.02 billion in financial year 2014. The increase can be linked to the US$333 million real estate project in Yangon by construction firm Fujita Corp with its Japanese and Myanmar partners, as well as a $400 million public-private partnership project led by contractor Kajima Corp. Japanese investment in Myanmar amounted to US$252 million in 2012, US$55 million in 2013, US$590 million in 2015 and US$280 million in fiscal 2016.

Cambodia moving towards sustainability in agricultural sector
(25 May 2018) International Financial Corporation (IFC) together with London based food company Mars Food and Cambodian rice producer Battambang Rice Investment Co. Ltd have formed a new collaboration to improve sustainable farming practices and post-harvest methods in Cambodia. The three entities will collaborate to help farmers in Cambodia to use sustainable agricultural standards and actions, and tap into advanced agricultural technology. This project is targeted to reach a higher yield and income by 20 percent and 25 percent respectively by 2025. The partnership will help around 9,000 smallholder farmers expose to climate smart agriculture technologies and financial literacy training within the next three years.