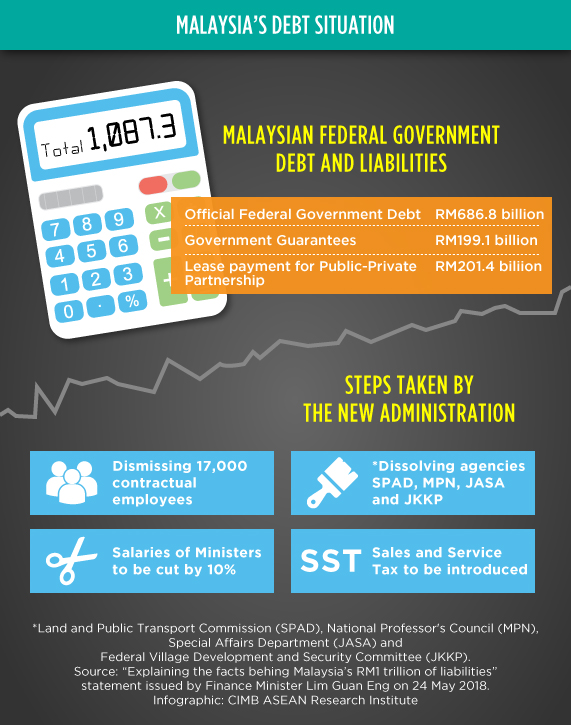 New government announced new measures to reduce government expenditure
(23 May 2018) According to Finance Minister Lim Guan Eng, the official federal government debt is at US$172.4 billion (RM686.8 billion), while the government guarantees for various agencies amount to US$49.5 billion (RM199.1 billion). The Malaysian government also makes lease payments for “Public-Private Partnership” projects such as building of roads, schools and hospitals, which is about US$50.55 billion (RM201.4 billion). He said all these debts are 80.3 percent of the country’s GDP as of 31 December 2017. To reduce the debt, the new government has terminated 17,000 contractual employees, announced 10 percent pay-cuts for ministers and shutting down government agencies such as National Professors Council (MPN), the Land Public Transport Commission (SPAD), the Residents’ Representatives Committee (JPP) and Special Affairs Department (JASA). The new government will also review projects including the Singapore-Kuala Lumpur Rail.

Rupiah rate has declined but remains attractive
(19 May 2018) Rupiah has dropped as much as 0.8 percent to 14,158 against the US Dollar, its weakest since October 2015. This drop led to the Indonesian central bank to spend at least US$7 billion of reserves since February to stop the downturn. Jakarta Composite Index (JCI) has declined by 9% whereas the benchmark bond yield has raised 68 basis points in 1Q18 to 7.358%, in what constitutes as the biggest quarterly growth since December 2016, reaching 7.39% on 9 May 2018 causing a net US$2.3 billion of Indonesian sovereign bonds being sold, the biggest quarterly withdrawal since 2009. However, Indonesia’s high yield and reformist moves remain attractive for foreign investors.

Inflation due to higher fuel prices
(18 May 2018) Inflation in Laos has increased by 1.88% mainly due to rising fuel prices, according to Lao National Statistics Bureau’s latest report. The data also shows that the value of Lao Kip dropped by 11% in 2018 as compared to 2017. The depreciation in Lao Kip especially against Thai Baht and US Dollar also contributed to the inflation in Laos as most of the consumer goods are imported from Thailand. Lower Lao Kip value against Thai Baht caused the higher price of imported goods and rising cost of living in Laos. The government cabinet has directed the Ministry of Industry and Commerce and the Ministry of Agriculture and Forestry to control the price of listed food items as well as for steel, cement and petrol.

Rising budget deficit in 1Q18
(24 May 2018) Phillippines’ Department of Finance (DOF) reported that the country’s fiscal deficit swelled by about 400% to US$2.2 billion (P115.9 billion) in 1Q18 from US$574 million (P30.2 billion) in 1Q17 mainly due to the unfavourable effects from developments in the oil and capital markets abroad. Although the government gained a lower fiscal surplus by 12% from US$1 billion (P52.8 billion) in 2017 to US$ 880 million (P46.3 billion) in 2018 for the month of April 2018, the computations from the data given by the finance department show that the government revenue actually improved by 21% from US$14.6 billion (P768.3 billion) in 1Q17 to US$17.6 billion (P927.1 billion) in 1Q18. However, the budget deficit is rising as the expenditure in 1Q18 rose even higher to US$19.8 billion (P1.043 trillion), which is 31% higher compared to 1Q17. The revenue given through the implementation of the Tax Reform for Acceleration and Inclusion (TRAIN) Law is also part of the reason for the country’s high disbursement.

ASEAN should not take positive outlook for granted
(21 May 2018) Singapore’s Trade and Industry Minister Chan Chun Sing stated that ASEAN is at a turning point as the bloc’s open and rules-based multilateral trading system, regional cooperation and economic integration is under heavy pressure. This is due to the unbalanced gains from globalization are being abused, causing inward sentiments that challenge the importance of blocs like ASEAN. However, Chan said that trade frictions between major economic players will lead to spillover effects in the region. He further added that ASEAN must reiterate their steadfastness to follow open regionalism, push for further deepening integration, and come together to make a strong statement for a free, open, rules-based and interdependent system.

India’s trade relationship with CLMV nations grows stronger
(22 May 2018) Cambodia, Laos, Vietnam and Myanmar (CLMV) trade with India has seen immense growth over the years, from US$460 million in 2000 to US$14.5 billion in 2017. India is the largest trading partner of CLMV nations in South Asia and according to Vietnam’s Deputy Minister of Industry and Trade Cao Quoc Hung, CLMV’s trade relations with India will only get better. Fast-improving economies, young population and strategic geographic location have helped trade ties between India and CLMV over the years. India is known for its developments in capital, technology, new energy, education, renewable energy while CLMV countries provide textile and garments, farm products, mineral, vegetables and even machinery parts.

Singapore’s commodity trading reaches a new high in 2017
(17 May 2018) Government agency Enterprise Singapore reported that Singapore’s commodity trading reached US$20.9 billion in 2017, which is a new high for the country. Businesses there also have appointed more than 15,000 people. These developments represent a 2.7 percent compounded annual growth rate over the last five years thanks to strong demand growth from vital markets like natural gas, nickel and copper, which is pushing improved investments in commodity. The turnover for the sector last was almost US$1.2 trillion. Enterprise Singapore said the significant growth in commodity trading is due to sustainable global economy and demand from Asia. Singapore at the moment has more than 400 global, regional and local commodities firms and Singapore’s marketplace comprise 80 percent of the world’s top oil and gas, metals and mining and agricultural enterprises.

Joint Foreign Chambers of Commerce urges Thai government to permit foreign ownership of local companies to exceed 49 percent
(21 May 2018) Foreign businesses have urged the Thai government to permit foreign ownership of Thai companies to exceed 49%. Due to this cap on foreign equity, foreign businesses will have to look for a competent Thai partner, otherwise foreign companies will have to rely on a local nominee to run the business. Joint Foreign Chambers of Commerce of Thailand has urged the government to amend Thailand’s Foreign Business Act (FBA) to attract foreign investment. Thailand’s Business Development Department, a body under the country’s Ministry of Commerce, said it is deliberating whether to allow some service businesses, especially those linked to government targeted industries, to increase foreign investment.

Cambodian agriculture sector show a sign the sector is on the right track
(2 May 2018) Cambodia’s Ministry of Agriculture said the country’s agriculture sector was on the right track as the total export of agriculture products were 5.13 million tonnes in 2017, a hike from 4.7 million tonnes in 2016. According to the 2017 annual report released by the ministry, rice exports grew by 17.3 percent to reach 635,679 tonnes in 2017, while rubber expanded by 30.14 percent to reach 188,832 tonnes during the year. While, the export of cashew nuts grew up to 20 percent in 2017 to 87,853 tonnes. However, rampant smuggling continues to plague the country’s agricultural trade as more than 40 percent of Cambodia’s rice exports go through informal channels while rubber plantations and processing companies have lamented that small-scale farmers get higher prices for their crops by selling to Vietnamese brokers instead of following Cambodia’s tax laws.

Growth in exports and tourism sector improve Thailand’s economic recovery
(30 April 2018) Thailand’s economy has bounced back in the first quarter of 2018 thanks to healthy growths in the export and tourism sectors. Bank of Thailand stated that exports in the first three months jumped 11.4 year-on-year, representing a seven-year high and a driving force in the country’s economy in 2018. Tourist arrivals hitting 10 million is one of the aspects helping Thailand’s economy in the latter half of 2018. For March 2018, the merchandise exports reached US$22.363 billion thanks to steady economic growth seen in Thailand’s trade partners. Thailand’s think tank Kasikorn research centre stated that the country’s favorable performance in oil-related shipment is due to rising global crude oil prices and accelerated electronics imports by China and the U.S. before the U.S. enforces import tariffs on Chinese-made products.