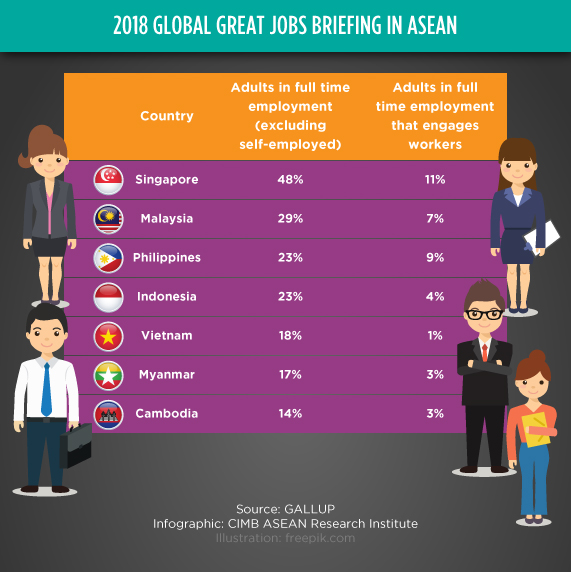 Singapore’s strong overall job performance still suffer from large engagement deficit
(2 May 2018) Eventhough Singapore’s overall job performance is stronger compared to other countries, it still suffers from a large engagement deficit. While 37 percent of Singapore’s adult population has full-time employment, only 11 percent of the population of adults fit the description of “full-time employment that engages workers”. Singapore has emerged as the top Asian country in adult full-time employment, excluding those self-employed, with 48 percent of adults having this type of work. The Gallup’s 2018 Global Great Jobs Briefing shows the distribution of high-quality jobs around the globe and how those jobs improve work and life outcomes for businesses and employees alike. Other ASEAN nations with workers that are engaged at work are the Philippines at nine percent, Malaysia at seven percent, Indonesia at four percent, Myanmar and Cambodia with three percent each and Vietnam with one percent. The research shows that across industries and countries, teams with highly engaged members are 17 percent more productive than those with lower average engagement. Gallup added that the engagement deficit has negative impacts on employers and employees in Singapore as it can lower productivity and retention as well as affecting workers’ well-being.

Asean growth to remain stronger in the coming years
(3 May 2018) A report released by the Singapore based Asean+3 Macroeconomic Research Office (AMRO) stated that growth in ASEAN is expected to remain robust in the coming years. AMRO in its report mentioned that growth in the region is expected to be sustained at a level of mid-5 percent, set to grow at 5.4 percent in 2018 and 5.2 percent in 2019. The report also acknowledges two crucial key risks to growth which are the rise in the interest rates by the United States Federal Reserve and the escalation of global trade tensions particularly between the US and China. The report also noted that the fiscal policy could also have a bigger role to play in supporting growth in the country. AMRO also noted that robust global growth has assisted the region to build up buffers against potential external shocks. Regional exchange rates have also become more fluid in recent years, and have played a pivotal role as a shock absorber.

Singapore to promote green financing in ASEAN and help create sustainable business culture
(30 April 2018) Singapore Finance Minister Heng Swee Keat said the country is able to promote green financing thanks to its firm finance regulatory environment and ability in creating a business culture of sensible practices through its own expertise in the field. He stated that Singapore has substantial resources that it can allocate to ASEAN when it comes to building knowledge and talent. Citing the example of the Association of Banks in Singapore, which introduced guidelines for responsible financing in 2015, Heng said Singapore is well positioned to improve green financing efforts in ASEAN. As such, the Singapore Sustainable Blueprint, the ratification of the Paris Agreement and the passing of the Carbon Pricing Bill during Singapore’s 2018 budget shows that the government is committed to the sustainability effort.

Indonesia manufacturing sector recorded its fastest growth in April
(2 May 2018) The Nikkei-Markit manufacturing purchasing managers’ index for Indonesia has stated that the country’s manufacturing sector earned its fastest growth in 22 months in April 2018 thanks to improving domestic demand output. In April, the index hiked nearly to 51.6-point, pushing further above the 50-point line that separates growth from contraction and touching its highest level since June 2016. With a sub-index for production touching its highest level since July 2014, companies surveyed for the gauge pointed stronger demand as the reason behind a third straight month of rising output. Since June 2016, in spite of weak demand from overseas and with a sub-index for new export orders registering sharper contraction in April, new orders increased quickly. However, inputs expenditures continued to increase at a slower pace as firms believe that the US dollar’s strength against Rupiah is the reason why cost for imported materials are increasing. Besides that, worries over a potential slowdown affected companies’ confidence, with an index tracking output expectations over the next 12 months dipping to its lowest level since December 2012.

Firms from the Philippines and Singapore sign US$186.7 million worth of joint venture projects
(29 April 2018) Firms from Singapore and the Philippines penned a deal worth US$186.7 million of joint venture projects in a meeting held between Philippine and Singaporean firms in Singapore on 28 April 2018. Among the agreements signed was the letter of intent for the development of 25 new Jollibee outlets in Singapore over a period of five years by the Jollibee Worldwide Pte. Ltd. and Golden Beeworks Pte. Ltd. This joint venture is expected to create over 1,920 jobs, especially for Filipino workers. The Philippines president Rodrigo Duterte was in Singapore to witness the ceremony and welcomed foreign investors to his country as long as investors pay taxes and follow the country’s regulation, including the environmental requirements. He also assured the Singaporean and Filipino businessmen of his personal backing in the fight against corruption that has been discouraging investors from coming into the country.

Philippines inflation to ease once lawmakers approve a measure to increase rice imports
(2 May 2018) Inflation in the Philippines will slow down from a five-year high once the country’s lawmakers officially agree to a measure that will allow more rice imports, giving authorities the opportunity to delay increase in interest rate. The Philippines Economic Planning Undersecretary Rosemarie Edillon said once a law limiting overseas purchases of the nation’s staple grain is revised by Congress by the end of the first half of 2018, the country’s inflation which has hiked to 4.3 percent in March will cool by at least one percentage point. Philippines President Rodrigo Duterte said the removal of import limits on the grain will help to increase the country’s depleted stockpiles. Currently, the Philippines has limited its rice imports to a volume that is given by the country’s National Food Authority, which prioritises local farmers. The arrangement, which the World Trade Organization (WTO) had been pushing to end, not only limits rice supply but also boosts domestic prices. Edillon said by enabling a market-driven importation slapped with at least 35 percent in tariff, it will boost the supply of the grain and cut retail prices by as much as US$0.14 (7 pesos) per kilogram from US$0.85 (44 pesos) a kilogram.

Malaysia launches Unsold Property Enquiry System to provide information to market players
(3 May 2018) The National Property Information Centre (NAPIC) has introduced a new system called the Unsold Property Enquiry System (UPESM), which helps market players such as developers, local authorities, buyers and other interested parties to view detailed information on properties. The system, which was developed in 2017 and launched in April 2018, shows the type of overhang properties, location and type. The complimentary service is limited to datas from 2016 and 2017 because of the high level of overhang. For the first half of 2017, UPESM showed that the completed-but-unsold residential units ballooned to US$3.12 billion (RM12.26 billion) from about US$2.18 billion (RM8.56 billion) at the same period in 2016. Known as an “overhang”, total unsold completed units increased to 20,876 in 2017, compared with 14,792 at the end of 2016, most of the overhang properties are high-rise residentials units costing US$127,097 (RM500,000) and above. NAPIC’s overhang figure is lower than Bank Negara’s figure of more than 140,000 units because it includes serviced apartments and launched units but unsold after a certain period.

Cambodian agriculture sector show a sign the sector is on the right track
(2 May 2018) Cambodia’s Ministry of Agriculture said the country’s agriculture sector was on the right track as the total export of agriculture products were 5.13 million tonnes in 2017, a hike from 4.7 million tonnes in 2016. According to the 2017 annual report released by the ministry, rice exports grew by 17.3 percent to reach 635,679 tonnes in 2017, while rubber expanded by 30.14 percent to reach 188,832 tonnes during the year. While, the export of cashew nuts grew up to 20 percent in 2017 to 87,853 tonnes. However, rampant smuggling continues to plague the country’s agricultural trade as more than 40 percent of Cambodia’s rice exports go through informal channels while rubber plantations and processing companies have lamented that small-scale farmers get higher prices for their crops by selling to Vietnamese brokers instead of following Cambodia’s tax laws.

Growth in exports and tourism sector improve Thailand’s economic recovery
(30 April 2018) Thailand’s economy has bounced back in the first quarter of 2018 thanks to healthy growths in the export and tourism sectors. Bank of Thailand stated that exports in the first three months jumped 11.4 year-on-year, representing a seven-year high and a driving force in the country’s economy in 2018. Tourist arrivals hitting 10 million is one of the aspects helping Thailand’s economy in the latter half of 2018. For March 2018, the merchandise exports reached US$22.363 billion thanks to steady economic growth seen in Thailand’s trade partners. Thailand’s think tank Kasikorn research centre stated that the country’s favorable performance in oil-related shipment is due to rising global crude oil prices and accelerated electronics imports by China and the U.S. before the U.S. enforces import tariffs on Chinese-made products.