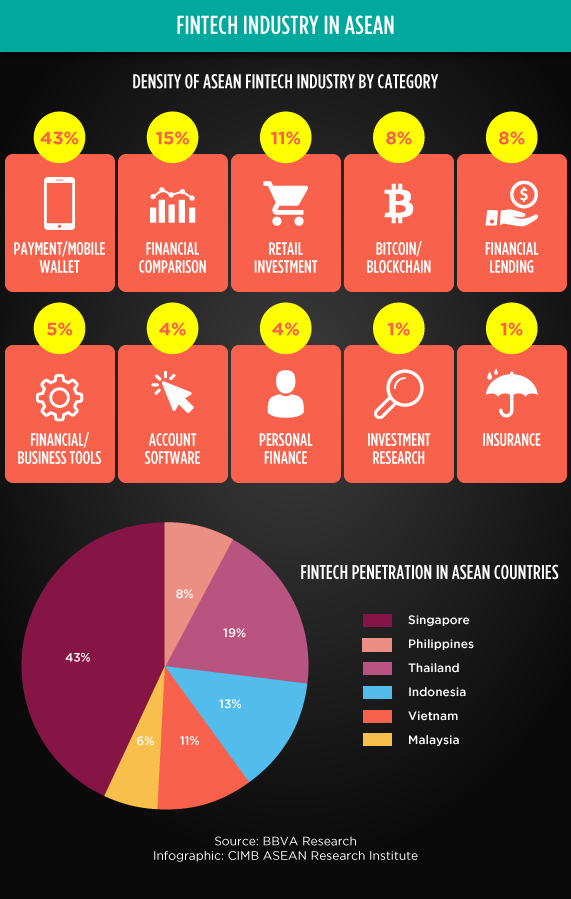 FinTech to play a significant role in ASEAN cooperation
(26 April 2018) Financial technology (FinTech) is expected to play a significant role in ASEAN partnership as the regional bloc looks to come out with new and innovative answers to solve problems of financial inclusion. In the Asian Development Bank (ADB) report titled “Accelerating Financial Inclusion in Southeast Asia with Digital Finance”, digital finance can hasten the access to financial services in the region. Globally, there has been a growth in financial inclusion. New technologies such as 3D printing, artificial intelligence and robotics, the Internet of Things (IoT), big data, mobile and cloud technology are some of the driving changes that advance financial inclusion in the region. A report by Temasek and Google said ASEAN digital economy is forecast to hit US$200 billion by 2025. In 2017, International Finance Corporation (IFC), a member of the World Bank Group, and Monetary Authority of Singapore (MAS) inked a memorandum of cooperation to form and advance the Asean Financial Innovation Network (AFIN) which allow banks and FinTech to expand, test and process digital finance and inclusion solutions. They will also be able to disseminate their services to financial institutions in multiple authorities.

Three Vietnamese cities to be part of the proposed ASEAN Smart Cities Network (ASCN)
(26 April 2018) Singapore Prime Minister Lee Hsien Loong said three cities in Vietnam namely Hanoi, Ho Chi Minh City and Da Nang will be part of the ASEAN network of smart cities. As the chair of ASEAN in 2018, Singapore’s idea of the smart cities network is to enhance connection on digital infrastructure and services such as e-payments across ASEAN. ASEAN Member States have nominated a total of 26 cities for the ASCN. This is envisioned as an all-in platform for ASEAN cities to share best practices, come up with city-specific action plans, and attract bankable smart city projects in cooperation with the private sector and ASEAN’s external stakeholders, including China. In line with each city’s local and cultural context, ASCN was designed to allow ASEAN member states to emphasise on fields and areas that matter to them. ACSN will look at various sectors such as transport, water quality, energy, healthcare, education, public services and information and communications technology.

Russia and China are the new promising destinations for Filipinos looking for job abroad
(24 April 2018) Russia and China are some of the prospective destinations for Filipinos searching for jobs abroad as the Philippines intends to cut its dependency on the Middle East. According to the Philippine Overseas Employment Administration, for the first time ever, Russia is opening its market to the Philippines and following the footsteps of China, the country is also requesting for a government-to-government deployment scheme from the Philippines government. Russia is now recruiting skilled workers in construction and services while China is requesting the Philippines to send over 2,000 English teachers in 2018. For decades, the Philippines has depended on money sent home by millions of Filipinos working abroad to boost the country’s economy and sustain the currency. In 2017, World Bank estimated the funds to be around US$33 billion last year, which is about 10 percent of the total gross domestic product of the Philippines and it is the country’s biggest source of foreign exchange after exports.

Indonesian motorcycle taxi drivers push for an end to low online fares
(23 April 2018) Thousands of Indonesian motorcycle taxi drivers that work for start-ups such as Grab and Go-Jek called for an end to low online fares and urged tighter regulations on the ride-hailing companies. Both startups have engaged in price wars to snatch market share in Southeast Asia’s biggest economy. The taxi drivers demanded for a standard fare of US$0.28 to US$0.38 (3,000 to 4,000 rupiah) per kilometre. They also urged for legal and social protection for online ‘ojek’ drivers as part of the national workforce. To seize the market share in the country, startups like Grab and Go-Jek have reduced the prices for its car rides, motorcycle trips and other services. While the move taken by the Indonesia Transport Ministry to classify Grab and Go-Jek as transportation instead of technology firms might cause the firms to encounter higher costs and scrutiny, the ministry further added that the levies that yet to be implemented depend on the consideration of the companies. Nevertheless, both Grab and Go-Jek have yet to make significant changes to their tariff fares.

Cambodian government reveals new blueprint for the country’s budgetary policy
(23 April 2018) Cambodia Prime Minister Hun Sen announced the new plan for budget reformation that focuses on intensifying the management quality of public funds. The Budget System Reform Programme for 2018-2025 is the new blueprint for the country’s budgetary policy which emphasises on boosting the effectiveness of the multi-year budgeting. Cambodia’s Prime Minister Hun Sen said since the launch of the budget reform programme 14 years ago, the government has made enormous progress, including achieving macroeconomic stability, building trust on the national budget and implementing financial information management systems (FIMS), a reform initiative that is specifically designed to enhance the governance and transparency of national budget management. In 2017, FMIS was implemented in ten government ministries after a successful application of the scheme at the National Treasury Department. In 2018, it will be used by 25 new provincial treasury departments and ten additional ministries.

Indonesia to conclude RCEP negotiations by 2018
(24 April 2018) Indonesia Trade Ministry said the government is planning to finalise negotiations over the Regional Comprehensive Economic Partnership (RCEP) by 2018. Currently, negotiations progress is at 80 percent. The RCEP involves 10 ASEAN countries and six ASEAN partner countries – Australia, China, India, Japan, South Korea and New Zealand. The Ministry emphasised the importance of ASEAN countries coming to a firm agreement over certain matters before the negotiations end. Meanwhile, Coordinating Ministry of Economic Affairs highlighted the importance of speeding up the RCEP negotiations, which started in 2012. Following the withdrawal of the United States from the Trans-Pacific Partnership (TPP) agreement, the ministry said the RCEP would become the largest trading group in the world in terms of the number of members and trade value.

Thailand firms to invest in Indian infrastructure projects
(23 April 2018) Thailand companies operating in India see a good opportunity to invest an approximate value of almost US$3 billion in the areas of green and brownfield projects including energy, infrastructure and metals sectors over the next three years. Thailand Trade Centre said the entity is eyeing India with great interest for the past seven decades and plans to strengthen the two-way trade thanks to the favourable approach from both governments. Over the decades, nearly 30 Thai firms are active in the field of infrastructure, real estate, food processing, chemicals, hotel and hospitality sectors in India. The Thai administration has also called Indian firms to invest in Thailand and at present, around 40 Indian companies have invested around US$2 billion, namely in the areas of software, agriculture chemicals and electric car development in the country. Since 2000, bilateral trade between the two countries has multiplied eight times to reach US$10 billion in 2017. Thai trade centre said it is vital for both countries to encourage private sectors to make investments in infrastructure and manufacturing in each other’s country.

Steel sector has the potential for 22 percent growth
(24 April 2018) Vietnam steel industry is in the making to reach a growth in production at 22 percent and develop export markets in 2018. According to the Vietnam Steel Association (VSA), this projection will only be achievable if it overcomes the constraints particularly in trade defence lawsuits and high imports. In 2017, the sector faced a total of 30 trade defence lawsuits from other countries and some of them have not been solved or settled.These include anti-dumping cases for cold-rolled stainless steel, steel plates, H-shaped steel, trade defence cases related to pig iron, long steel and colour-coated steel sheet. As of March 2018, Vietnam had exported 446,000 tonnes of steel products reaching US$321 million. Nevertheless, Vietnamese steel has managed to meet the demand of big markets, such as the United States, Australia and Europe due to its quality steels.

E.U and the US reluctant to remove preferential trade access for Cambodia’s vital garments sector
(24 April 2018) The Fitch’s BMI research unit said the European Union and the United States are hesitant to remove preferential trade access for Cambodia garments which indicate that the worst-case-scenario of major industry disturbance and factory closures is less conducive. Rights groups and the opposition have continuously called on the United States and others to force targeted sanctions in the wake of a wide-ranging crackdown on political disputes in Cambodia. However, industry insiders opposed any cut to trade preferences, saying it would hurt garment workers the most. According to the World Bank, Cambodia has been the sixth fastest-growing economy in the world over the past two decades, with an average GDP growth rate of 7.6 percent, thanks largely to garment exports. The Garment Manufacturers Association of Cambodia (GMAC), which represents 600 factories expects exports to grow 3 to 4 percent in 2018.

Malaysia’s to grow the fastest in Southeast Asia after the Philippines in Q1
(20 April 2018) Economists predict Malaysia to develop at the fastest pace in Southeast Asia region after the Philippines in the first quarter of 2018. Malaysia is forecast to reach 5.6 percent growth in gross domestic product (GDP) for the quarter, higher than emerging economies’ GDP growth expectation of 5.4 percent. According to Bloomberg’s data, Malaysia is expected to position the country as the third fastest growing economy among emerging economies, after the Philippines. JP Morgan Chase, in its latest report, said Malaysia’s economy in the first quarter is expected to have strong projection in economic growth, thanks to growing manufacturing exports. The American financial services firm changed the GDP growth forecast upward to seasonally adjusted annual rate of 6.5 percent quarter-on-quarter from 5.5 percent previously.However, the firm maintained Malaysia’s overall GDP growth year-on-year at 5.8 percent.