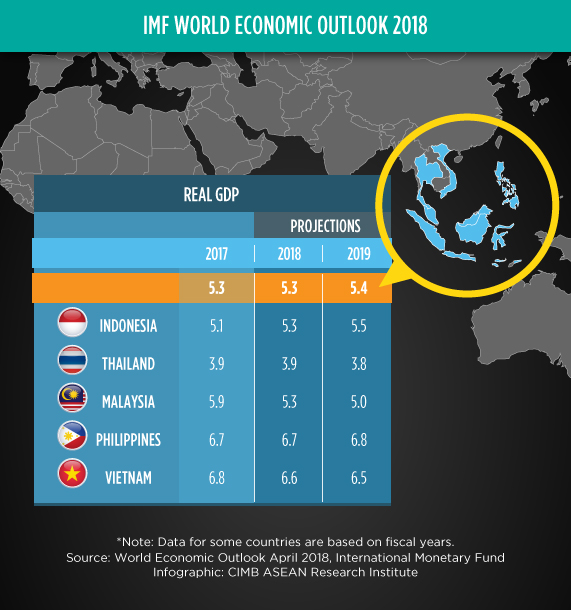 ASEAN-5’s GDP to grow by 5.3 percent in 2018
(18 April 2018) The latest World Economic Outlook report released by the International Monetary Fund (IMF) reported that the combined GDP of ASEAN-5 (namely Philippines, Vietnam, Indonesia, Thailand and Malaysia) may grow by 5.3 percent and 5.4 percent in 2018 and 2019 respectively. Over the next two years, the Philippines is expected to be the fastest growing economy in Southeast Asia and second fastest in the world with a GDP growth of 6.7 percent for 2018 and 6.8 percent for 2019, followed by Vietnam with projected growth of 6.6 percent in 2018 and 6.5 percent in 2019. Strong global growth of 3.9 percent for 2018 and 2019 would also provide a favourable external environment for the Southeast Asian region.

ASEAN explores alternative funding sources besides China for infrastructure and economic development
(17 April 2018) ASEAN policymakers are looking beyond China to fund infrastructure projects and this was evident during a recent discussion by ASEAN’s top financial officials in Singapore. During a World Bank sponsored panel discussion in Singapore on 5 April 2018, policymakers discussed ideas to attract alternative financing. Myanmar which already has three special economic zones, plans to enlarge government bond issuance; Indonesia in the past required insurer and pension funds to hold 30 percent in government bonds but now this can be government bonds or infrastructure-related securities. About 30 percent of Thailand’s US$80 billion infrastructure projects needs private financing and to do so, the government plans to open an infrastructure fund to investors in the next couple of months. Also, Vietnam is eyeing the green bond market while Singapore is setting up a new government led infrastructure office to serve as a regional centre to provide financing for innovation projects. Asian Development Bank estimates that ASEAN needs about US$2.8 trillion on projects such as roads, bridges, ports, and railways from 2016 to 2030 to maintain economic growth and reduce poverty.

Indonesia gears to boost exports in biodiesel, Malaysia brace for slowdown in market share
(19 April 2018) The removal of anti-dumping duties by European Union (EU) on shipments from some Indonesian producers will boost the country’s biodiesel export but this will lead to a slowdown in Malaysian market share. In March 2018, EU removed duties on biodiesel imports for 13 Indonesian and Argentine producers that had been in place since 2013. Following this development, Indonesia is expected to ship around 432,000 tonnes of biodiesel to the EU in 2018. It is still far lesser than the 1.4 million tonnes exported in 2016 before the EU duties were introduced. In 2017, the country did not ship any biodiesel due to the anti-dumping duties. Prices of Malaysian palm methyl ester, the bio component of biodiesel that comes from palm oil, was traded at US$747 a tonne on 19 April 2018, versus US$711 in Indonesia. According to Malaysia Biodiesel Association (MBA), the removal of EU exports would see biodiesel production in Malaysia fall to 500,000 tonnes in 2018 from 720,000 tonnes in 2017, lowering plant utilisation rates from current levels of around 30 percent.

World’s top share markets fueled by Vietnam’s ‘mini-China’ story
(18 April 2018) Analysts say investors are drawn to Vietnam’s “mini-China” story, where a communist state embraces the private economy, integrates itself into the global trading system, and positions itself as a hub for foreign manufacturing. Vietnam equities have racked up the best gains in Asia in the year to date, making the Ho Chi Minh Stock Exchange one of the world’s best performing bourses. As part of a diversification out of China, Korea and Japan too have shifted a lot of production to Vietnam. For instance, companies that have set up factories in Vietnam are now contributing to Vietnam trade balance. Vietnam’s economy grew 7.4 percent at an annualised rate in the first quarter of this year and its exports now has exceeded Indonesia.

Laos could see itself removed from least developing country list by 2024
(18 April 2018) Laos could see its status as one of the world’s least developing countries removed as early as 2024. According to the United Nation’s Economic and Social Council Committee for Development Policy (CDP), Laos had met two of three criteria of Gross National Income (GNI) per capita and for the Human Assets Index (HAI), while The Economic Vulnerability Index (EVI), which measures resilience to shocks and stability, is still to be met by the country. The CDP found the GNI per capita of Laos had reached US$1,996 in 2018, surpassing the threshold of US$1,230 or more, while the HAI had reached 72.8, compared to a threshold of 66 or more. Laos Vice-Minister of Information, Culture and Tourism Savankhone Razmountry said Laos aims to achieve an upgrade from LDC status to a middle-income country by 2030 by strengthening international economic partnerships, including the promotion of tourism in various countries. Laos has set a target to move away from LDC status during the period from 2025 to 2030 on the back of tourism as the government plans to increase the number of foreign visitors from around 4 million to 6 or 7 million in the coming years.

Vietnam reopens its market for Indonesia automotive products
(17 April 2018) During the Third Joint Commission for Bilateral Cooperation of Indonesia-Vietnam (RI-Vietnam JCBC) in Hanoi, Vietnam agreed to reopen its market for Indonesia`s automotive products. Indonesia will be able to continue its automotive products exports to Vietnam after the Indonesian government agreed to comply with Vietnam’s policy on imports of motor vehicles. In November 2017, the Vietnamese government issued decree No. 116/2017/ND-CP on car manufacturing, assembly, importation and warranty offering, a move that tightened car imports from Jan 1, 2018, onwards, which affected Indonesia’s automotive exports. According to Indonesia’s Minister of Foreign Affairs Retno Marsudi, in 2017, the export of automotive products to Vietnam reached a total amount of US$293 million. Indonesia and Vietnam`s trade continued to increase after the two countries established a strategic partnership in 2013. In 2017, the trade value between Indonesia and Vietnam reached US$6.8 billion, increasing 8.64 percent from 2016.

Indonesia shares react positively to trade data
(16 April 2018) Indonesian shares reacted positively to trade data released on 16 April 2018 by Indonesia’s Statistics Agency (BPS). Indonesian shares closed 0.3 percent higher after data showed the country’s economy in March posted its biggest trade surplus in six months. Indonesia’s Finance Minister Sri Mulyani Indrawati said the country’s first quarter GDP was likely to be 5.2 percent, which would be an improvement of the 2017 growth, which recorded 5.01 percent. The Indonesia Investment Coordinating Board (BKPM) targets to attract Rp 795 trillion (US$58 billion) in 2018 from both foreign and domestic investments, a 10.4 percent increase compared to the figures in 2017.

ADB forecasts Cambodia’s economic outlook to remain positive
(13 April 2018) The Asian Development Bank (ADB)’s annual economic publication, Asian Development Outlook (ADO) 2018 said Cambodia’s economic outlook remains positive and the economy is forecasted to grow at a robust 7 percent in 2017 and 2018. Growth in exports, strong foreign direct investments, growing tourist arrivals and increasing domestic demand should promote strong growth for the next two years. The positive economic outlook, however is subject to downside risks, increased by the vulnerability of Cambodia’s financial sector to global financial volatility traceable to an almost doubling bank credit-to-gross domestic product ratio over the past 5 years to 76 percent in 2017.

New Singapore high-tech national job portal to improve prospects for job seekers
(17 April 2018) A high-tech national jobs portal was launched to better match local job seekers with employers in Singapore. Called MyCareersFuture.sg, the portal developed by Workforce Singapore (WSG) and the Government Technology Agency (GovTech) enables users to prioritise search results according to the relevance of the jobseeker’s skills. It replaces the interface of the existing Jobs Bank for users, and WSG said it aims to roll out the function for employers to post jobs by the end of this year. The portal went live in January 2018 and as of first week April 2018, it has received 280,000 visitors. The Jobs Bank was introduced in July 2014 as part of the Fair Consideration Framework to improve employment prospects for Singaporean professionals, managers, executives and technicians (PMETs).