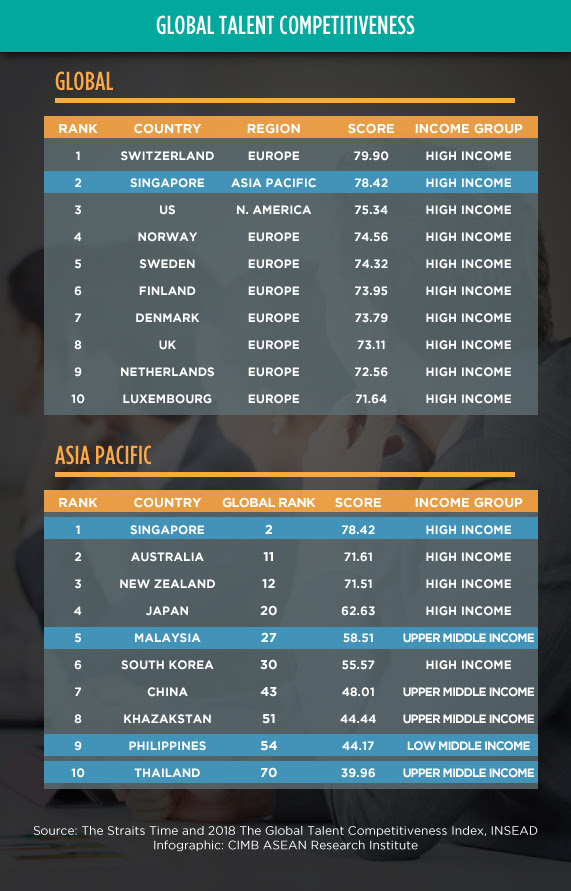 Singapore tops talent competitiveness and development for five consecutive years
(11 April 2018) Results from the Global Talent Competitiveness Index 2018, compiled by French business school Insead, had ranked Singapore as the top country in Asia-Pacific for the fifth year, and no 2 globally in drawing talent. The index measures the ability of 119 countries to lure, develop and retain talented people and underscored the significant value of diversity to build innovative teams and to provide organizations with the capacity to address the demands of markets and operations in a multicultural environment. Two other ASEAN countries that were also included in the global talent index competitiveness are Malaysia and Thailand, which came in at 27th and 70th position respectively.

Finance ministers and central bank governors of ASEAN reaffirm commitment to international trade and investment
(6 April 2018) A joint statement released after the ASEAN Finance Ministers Meeting in Singapore on the 6th of April said ASEAN finance ministers and central bankers have reaffirmed their commitment to international trade and investment. Fostered by 2017 strong economic growth of 5.1 percent, the ministers and central bank governors expect the region to be able to support and sustain its growth momentum in 2018. Several factors that led to this economic growth momentum include the recovery of the broad-based global economic, global trade expansion, sustained private consumption and the advancement in infrastructure investment.

Cambodia and Japan ink agreement for economy and infrastructure development
(8 April 2018) On 8 April, Japan has signed a grant and a loan agreement worth a combined total of US$90 million (¥ 9.6 billion) with Cambodia for the economic and electricity transmission projects in Cambodia. Advisor of Cambodia Prime Minister Eang Sophalleth said Japan will be assisting Cambodia in becoming an upper middle-income country by 2030, which were followed by Prime Minister Hun Sen’s praise for Japan for its financial assistance to his country.

Thailand economy to grow by 4.1 percent in 2018
(10 April 2018) According to the World Bank, Thailand’s economy is forecasted to grow by 4.1 percent in 2018, the fastest pace since 2012. The World Bank in a statement said that in addition to rapid expansion of exports, the country’s economic growth is also driven by recovery of domestic demand with an increase in capacity utilization and import acceleration. Furthermore, Thailand’s regulatory changes and political stability also contribute to the country’s improvement in business sentiment. World Bank Director for Thailand Ulrich Zachau added that with intensifying structural reforms the country is undergoing, Thailand has the potential to boost its country economic capacity and grow faster over the medium term. Last year, Thailand’s economy expanded 3.9 percent, the fastest pace in five years.

Philippines promotes partnerships between local and foreign companies
(10 April 2018) At Boao Forum for Asia in Hainan, China, President Rodrigo Duterte promoted greater collaboration between domestic and foreign-based companies in order to create more opportunities for the people of Philippines, as well as to bring about economic progress that the country aims for. In addition, the president also remarked that with good governance as a fundamental basis, the Philippines will increase investments for the development of the country, especially in infrastructure, innovation and interconnectivity.

Digital transformation to improve the Malaysian economy
(10 April 2018) According to Malaysia Digital Economy Corp (MDEC), by the year 2025, the digital transformation impact on the Malaysian economy is expected to increase by US$103.25 billion (RM400 billion). MDEC also noted that the biggest challenges in digital readiness of Malaysia key industries are the lack of structured approach, unavailable or no prioritised budget, lack of digitally skilled workforce, and a perception that digital transformation is too fast-paced and complex. In order to gradually overcome these key challenges, a strategic partnership initiative conducted by Malaysian Investment Development Authority (MIDA) and MDEC called Digital Transformation Acceleration Programme (DTAP) was established for large corporations and mid-tier companies to provide them with a structured approach to digital transformation. In 2016 alone, the digital economy contributed about 18.2 percent to Malaysia’s gross domestic product (GDP).

Indonesia to regulate prices on non-subsidised vehicle fuels to control inflation
(10 April 2018) According to Indonesia’s Deputy Energy Minister Arcandra Tahar, as part of Indonesia initiatives to control inflation and boost the purchasing power of its people, the country is planning to better regulate the prices of non-subsidised vehicles fuels. While making reference to the fuel prices adjustment excluding aviation fuel and industrial fuel made by retailers, he further explained that the plans came about following concerns for the country’s rising inflation rate. Non-subsidised fuel prices are currently set by retailers, but under a planned regulation the government would have the right to decide whether retailers can change fuel prices.

Vietnam key participant in Greater Mekong Subregion (GMS) trade and investment collaboration
(10 April 2018) Over the past 25 years, Vietnam has proactively participated in trade and investment cooperation activities in the Greater Mekong Subregion (GMS), with the country holding key positions in three GMS economic corridors, which are the Southern Coastal Corridor (GMS-SCC, the East-West Economic Corridor (EWEC), and the North-South Economic Corridor (NSEC). The country worked effectively in implementing 10 FTAs that are currently in effect and accelerated negotiations for the Regional Comprehensive Economic Partnership (RCEP) and other agreements. According to the World Bank (WB), in 2017, Vietnam’s Ease of Doing Business Index (DB) jumped 14 places to 68th among 190 economies, while the World Economic Forum (WEF) ranked Vietnam’s Global Competitiveness Index (GCI) at 55th out of 137 countries, five places higher than the year before. Prime Minister Nguyen Xuan Phuc said these achievements have shown that Vietnam has gained the trust of investors.

ADB raise its growth estimate for developing Asia
(11 April 201) The Asian Development Bank has raised its growth estimate for developing Asia from 5.8 percent to 6 percent in 2018. Despite citing solid demand for exports, ADB said that the US-backed protection measures and their retaliatory measures could affect performance of trade in the region. In the 2018 Asian Development Review, it is highlighted that growth in Asia is forecasted to decline slightly to 5.9 percent in 2019. Another downside risk identified that may affect Asia’s growth is reduction in capital inflow, which will take effect if the US Federal Reserve raises interest rates faster than the expectations of the markets.