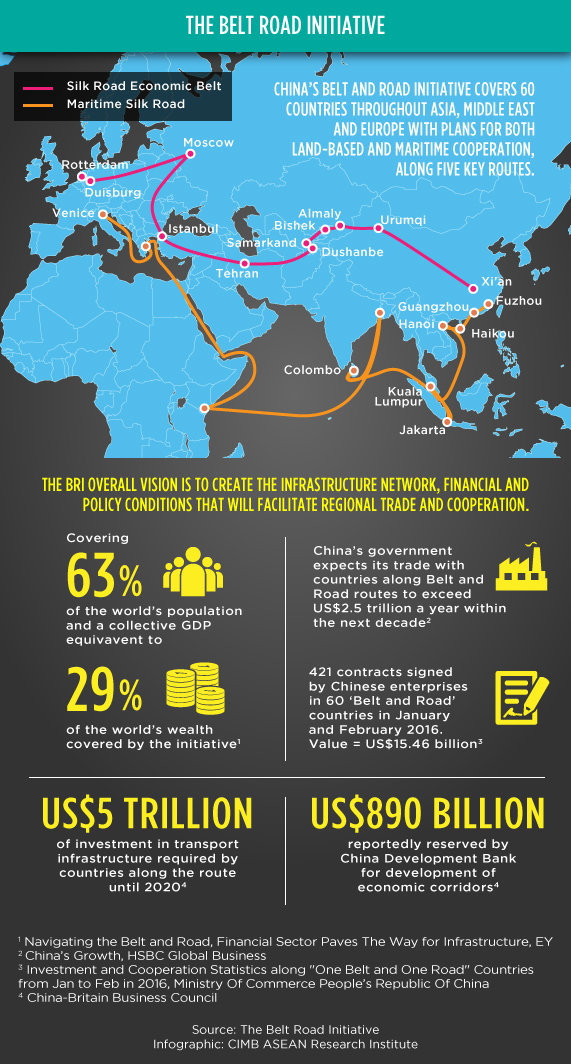 Malaysia to benefit from China’s Belt and Road Initiative
(3 April 2018) Malaysia’s International Trade and Industry Minister Datuk Seri Mustapa Mohamed said Malaysia has the best opportunities to benefit from China’s Belt Belt and Road Initiative (BRI). According to the minister, with the main focus being the reduction of barriers to international relations while improving the air, land and sea infrastructures, Malaysia stands to reap benefits from the connectivity between the two nations. One of the benefits expected to be received by Malaysia from China is the completion of the local industrial supply chain ecosystem, as it would attract new investment projects and opportunities to local industries in terms of supply chain management. Currently, China is one of the leading sources of foreign tourists into Malaysia, promising to bring extensive economic benefits to the country especially through the tourism sector.

ASEAN has more to win than to lose from an escalating trade war between China and US
(5 April 2018) According to CIMB Reseach, with regards to the rising trade war between US and China, there will be more winners than losers in ASEAN. On 4 April, China announced new tariff of 25 percent on US$50 billion worth of US imports, targeting 106 products including soybeans, automobiles, chemicals, and aircraft, in response to the United States’ proposed duties on some 1,300 Chinese exports worth US$50 billion. ASEAN countries particularly Malaysia, Singapore, and Thailand are well positioned to benefit from the displacement of demand for product categories in which it competes with China and US. Indonesia is relatively insulated from US-China trade tensions due to its low exposure to E&E and machinery exports. China is the biggest trading partner for Malaysia while the US is the third. Malaysia, the largest photovoltaic exporter to the US, with a market share of 30 percent, Malaysia has requested to be exempted from the US-imposed steel and aluminium tariff.

Singapore manufacturing expands for 19 consecutive months
(3 April 2018) Singapore manufacturing saw its 19th straight month of expansion in March, with the Purchasing Managers’ Index (PMI) edging up to 53.0 from an earlier 52.7. According to Singapore Institute of Purchasing and Materials Management (SIPMM), the latest PMI reading was attributed largely to the rapid growth in factory output, higher new orders and new exports. DBS Bank economist Irvin Seah said the outlook for the manufacturing sector has remained positive on the back of a synchronised global recovery while adding that any further growth in the manufacturing sector would have to be driven by investment in production capacity.

Indonesia aims to improve its rank in the Global Footwear Industry
(4 April 2018) Indonesia is targeting for the third position in the global footwear industry by improving its 4th position after China, India, and Vietnam. With main export destinations including Europe and the United States, Indonesia`s footwear production has reached 1.1 billion pairs per year, of which 800 million pairs are allocated for domestic use. Indonesia Industry Ministry`s Small and Medium Industries for Fashion and Crafts said 86 percent of the footwear in the world is produced by Asian countries, where China takes 80 percent of the total production, followed by 6 percent is produced by India, and other 14 percent by Vietnam, and Indonesia. Through the Indonesian Footwear Industry Development Center (BPIPI), the government seeks to increase the skills of national shoe craftsmen.

Vietnam plans to raise taxes on fuels to reduce pollution and pay debt
(4 April 2018) According to Vietnam’s Finance Ministry, the country is planning to increase taxes of fuel starting this July in fight against pollution and to pay off public debt, though analysts caution that the increase in fuel taxes could increase inflation and affect businesses in the country. Vietnam will also increase the environment tax on gasoline by 33.3 percent to US$0.1754 (4,000 dongs) per litre. Vietnam Deputy Finance Minister said the plan to increase taxes is part of the move to restructure the state budget with an objective to ensure the safety and stability of the national financial system, which is part of the country’s strategy to reduce products that cause pollution.

Growth in energy and mines industry to boost Laos’ economy
(2 April 2018) Laos has 53 hydropower plants that are able to produce 37,028 million kilowatt hours (kWh) of electricity in a year. According to the Laos Energy and Mines Minister Dr Khammany Inthirat, there are 47 plants that are still under construction or about to start construction, which all are expected to be operating by 2020-2021. Following this, Laos will then have 100 hydropower plants that will be able to generate 66,944 million kWh a year, with approximately 85 percent of those expected to be exported and only 15 percent will be for domestic use. Laos has agreed to sell its electricity to its neighbouring countries including Thailand, Vietnam, Cambodia, Myanmar and Malaysia. Dr Khammany further explained that the country’s mines sector is also developing following effective green and sustainable policies implemented in Laos. In 2017, ore production from mining investment projects reached 10 trillion kip or approximately THB39 billion, representing an increase of 6 percent from 2016’s production.

ASEAN, US affirm plans to bolster economic ties
(4 April 2018) 10 ASEAN member states and the United States have reiterated commitment to enhance economic cooperation at a dialogue session co-chaired by the US and Malaysia on 3 April. According to the US embassy, participants of the dialogue session looked forward to bolstering economic ties with the US through the US-Asean Connect, the US-Asean Trade and Investment Framework Arrangement and other capacity building programmes. The dialogue session was co-chaired by Ramlan Ibrahim, secretary general of Malaysia’s Ministry of Foreign Affairs, and Susan Thornton, acting assistant secretary of Bureau of East Asian and Pacific Affairs.

The Philippines to become an upper middle-income nation by 2019
(3 April 2018) According to a report released by the Philippines National Economic and Development Authority (NEDA), the Philippines could reach the upper middle-income country status earlier than the initial target of 2022 by end of 2019. The country’s strong economic growth performance in 2017, driven by President Duterte administration’s ambitious infrastructure program enabled the Philippines to achieve gross national income per capita growth rate of 4.8 percent, higher than the target of 4.5 percent. The government aims to spend US$160 billion (PHP8.4 trillion) on infrastructure until 2022 to boost its country economic growth to 7 to 8 percent starting this year. Although GDP growth in 2017 only grew 6.7 percent, slower than 2016’s 6.9 percent, Philippines GDP in 2018 is still targeted to grow within the government’s 6.5 to 7.5 percent target.

Myanmar investment foresees significant business prospect with Thailand
(3 April 2018) Myanmar investment body foresees a significant inflow of Thailand investment over the next few years. In the 2017/2018 fiscal year ending in March 2018, Myanmar has received a total US$123 million (THB3.84 billion) worth of Thai investments. Aung Naing Oo, Secretary of Myanmar Investment Commission and Director-General of the Directorate of Investment believed that in 2018, Myanmar will receive more investment from Thailand with manufacturing and food processing being two of the most attractive sectors for Thai investors. In addition to interest in investing in major cities of Myanmar such as Yangon, Mandalay, and Nay Pyi Taw. Thai investors are also seeking opportunities in the less developed Tanintharyi Region.

Vietnam imports of complete built-up (CBU) cars to increase in volume and value
(2 April 2018) The General Statistics Office of Vietnam (GSO) estimated that imports of completely built-up cars in April will likely increase in both volume and value compared to the previous month of March. The hike in imports showed that importers have found alternatives to fully meet the requirements of Decree 116. In March, the GSO reported that approximately 5,000 cars worth US$115 million were imported to Vietnam, showing an increase of 25 percent in volume and 8.2 percent in value as compared with February 2018. In October 2017, the Vietnamese Government issued Decree, which set down the conditions for production, assembly, import and business of automobile warranty and maintenance services, which auto importer in Vietnam sees as an obstacle.