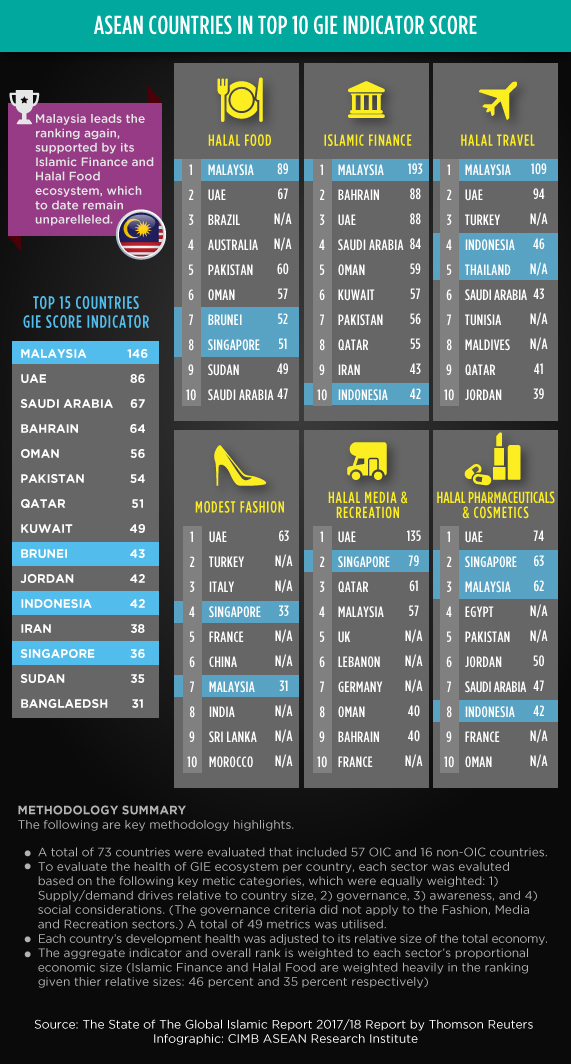 Strong economic fundamentals to drive Malaysia’s halal industry
(27 March 2018) Malaysian once again leads the Global Islamic Economy Indicator (GIEI) for the fifth year in a row, this year 60 points ahead of the UAE, reflecting the country’s robust Islamic Economy ecosystem, with Malaysia enjoying a substantial lead in Islamic Finance and Halal Food. Malaysia External Trade Development Corp (Matrade) said Malaysia’s thriving halal industry is underpinned by strong economic fundamentals and various market-driven initiatives. Last year, Malaysia’s export of halal products recorded a 2.8 percent rise, or approximately US$11.23 billion (RM43.4 billion) increase compared to the figures reported in 2016. Based on The State of the Global Islamic Report 2017/18 report released by Thomson Reuters, the value of the global Islamic economy is expected to increase from to US$5.9 trillion (RM22.80 trillion) by the year 2022 from US$3.6 trillion (RM13.91 trillion) in 2016.

ASEAN to face minimal impact if US-China trade war explode
(28 March 2018) The trade war between the United States and China will have minimal impact on Southeast Asia, as none of the ASEAN members are major exporters of steel and aluminum to the US. Last week, United States President Donald Trump escalated tension between the U.S. and China by introducing tariffs on US$50 billion worth of Chinese exports to the US. The United States’ moved was retaliated by China, who then announced that the country would impose new taxes on US imports worth close to US$3 billion. China and the US make up about 42 percent of global gross domestic product (GDP) and about 25 percent of the total global trade volume.

Malaysia’s CPI at 16-month low while Singapore’s inflation recorded a 0.5% rise in February
(24 March 2018) Department of Statistics Singapore said the country’s Consumer Price Index, which is the principal measure of inflation has risen 0.5 percent in February compared to economists’ estimates of a 0.4 percent increase. It is said that the key consideration for the Monetary Authority of Singapore’s (MAS) monitory policy moves is the core inflation which excludes the cost of accommodation and the private road. Core inflation for Singapore came in at 1.7 percent in February, an increase from 1.4 percent in January. For Malaysia, Consumer Price Inflation was dragged to a 16-month low at 1.4 percent in February. Despite low inflation, Bank Negara Malaysia during the release of its annual report recently maintained its positive growth outlook and revised upwards its projection for the Malaysian economy to revised inflation rate at 2.8 percent in the second quarter of 2018.

ASEAN in need to set clear policy and regulation to attract renewable energy investment
(28 March 2018) According to a study by IRENA, an inter-governmental organisation founded in 2009 to promote the adoption of renewable energy, Southeast Asian countries need to set clear policy and regulatory frameworks in order to attract investment in renewable energy. IRENA added that reliable policy framework is the most crucial factor that will create market opportunity and thus, attract investments from the private sector. ASEAN has set for itself a target of having renewable energy contribution of 23 percent of its energy mix by 2025 and to reach the target, the region would need investments worth of US$27 billion annually. Between 2006 and 2016, six major Southeast Asian markets, Indonesia, Malaysia, the Philippines, Singapore, Thailand, and Vietnam have attracted investment with a combined total of US$27 billion into the renewable power sector.

Vietnam focuses on private sector to boost its economic growth
(27 March 2018) According to the Prime Minister of Vietnam Nguyen Xuan Phuc, Vietnam is determined to make private enterprise the main engine of its economy within two years’ time as the private sector is an important boost for the economy of the country. As such, he added that the government will try to create the most favourable policies and environment so that the country will be able to meet its target of having over 1 million private enterprises in Vietnam, which will make up about 50 percent of Vietnam’s GDP by 2020. To date, private enterprises in the country contribute to about 43 percent of the country’s total GDP.

Investment by Thailand driven by strong economic growth in Asean especially CLMV
(26 March 2018) Strong economic growth in Asean, especially in CLMV countries (Cambodia, Laos, Vietnam, and Myanmar) has encouraged and attracted Thai investors to expand their regional investment by focusing on alternative energy, food and agriculture processing, tourism, and service business sectors. CLMV countries are expected to be in the top five countries for Thailand investors from this year onward till 2022, in line with the Thai government’s policy to encourage more local investors to expand their investment to CLMV countries. Deputy Prime Minister Somkid Jatusripitak said, in furthering the collaboration with the CLMV subregion, the Thai government also has to draft a master plan for trade and investment between the regions.

Thailand to impose 15 percent tax for trade on digital currencies
(28 March 2018) Transaction involving cryptocurrencies, including digital currencies, will be subjected to a 15 percent withholding tax under a measure approved by the Cabinet of Thailand, the executive branch of the country’s government. Thailand Finance Minister Apisak Tantivorawong said the cabinet approved the draft bill on digital asset business after it was reviewed by the Thailand Council of State. Adding to that, Thailand Deputy Finance Minister Wisudthi Srisuphan said the value-added tax (VAT) that was included in the 15 percent tax would be collected on digital-currency transactions. If there is a digital-currency exchange without any profit generated, only VAT would be levied. On 13th March, the Cabinet approved a draft emergency decree relating to businesses involving trading of digital assets and drafted an amendment to the Revenue Code for the collection of taxes on investments in the emerging sector.

Philippines eye 3 new product categories for export
(28 March 2018) The government of the Philippines has identified three product categories that could serve as the new approach for growth and expansion for Filipino exporters in 2018. The Philippine Exporters Confederation Inc. citing the Philippines Department of Trade and Industry (DTI) said the three new product categories, which are organic, halal, and kosher, would open up new opportunities for exporters. According to DTI Export Marketing Bureau, the consumer market has continued to grow rapidly annually, whereas halal products and services have been few of the fastest growing consumer segments in the world, accumulating a total of US$2.6-trillion, where it is expected to grow up to US$10 trillion by 2030. On the other hand, US kosher market alone has gathered more than 12 million consumers and has seen a double-digit growth of 10 percent to 15 percent annually since 2004.