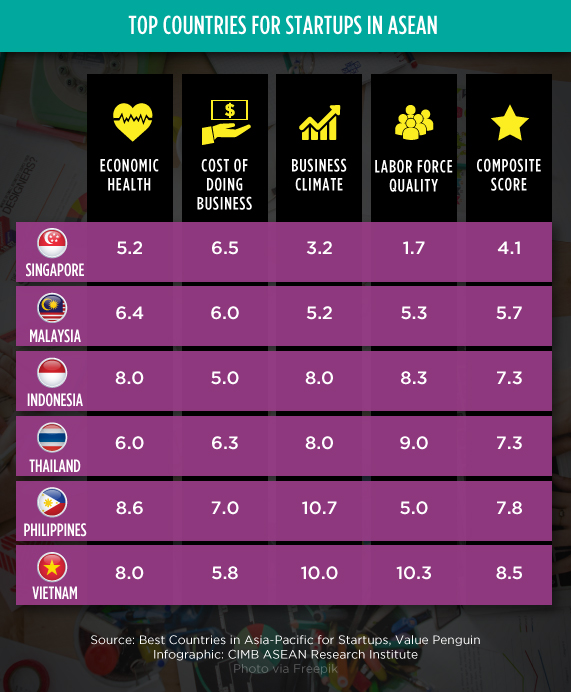 Singapore ranks first while Vietnam comes in last for the best countries in ASEAN for startups
(17 March 2018) Based on a survey conducted by Value Penguin, Singapore and Malaysia came in as the top two friendliest ASEAN countries for business startups. According to the survey, the low unemployment rate, good internet accessibility, availability of tax incentives for small businesses and high education rates are among the crucial traits that make Singapore a great place for startups to grow their businesses. On the other hand, Philippines and Vietnam came in as the bottom two ASEAN countries in the list due to the country’s unfavourable business climate issues, including the ease of starting a business and trust in public institutions as well as low labour force quality.

ASEAN market sentiment weighs down as US and China trade war heightens
(23 March 2018)The ASEAN market sentiment was weighed down by the heating tense of a trade war between the US and China following the US’ threats against China’s steel and aluminium exports in addition to its sanction on China for intellectual-property theft. Markets across Southeast Asia generally closed lower on 23 March 2018 following the escalating tensions between China and the US, as investors remain cautious and wary of the impact. Morgan Stanley analysts noted that the rising concerns over trade wars have become a more prominent risk to the global economic outlook. State Street’s Head of Policy and Research Elliot Hentov also pointed out that this round of trade tensions could have significant and lasting implications for companies in China, certain sectors in the US and global investor portfolios.

Cambodian economy projected to grow by 7 percent in 2018
(20 March 2018) According to the latest forecast by the International Monetary Fund (IMF), the Cambodian economy is projected to grow by 7 percent this year. The IMF’s forecast is slightly higher than the figure released by the Cambodian government, which set the growth rate at 6.9 percent.The higher growth rate projection came after the release of data which recorded higher public spending and robust economic activity in the construction and tourism sectors in the country. During a forum on the national budget for the year 2018 held in January, Vong Seyvisoth, Secretary of State at the Ministry of Economy and Finance said that with strong economic growth, the country’s dependency on foreign nations will be reduced, which will in turn, help the country to attain full control of its economy.

Indonesia central bank keeps policy rate unchanged
(22 March 2018) During its monetary policy meeting held on 22 March 2018, Indonesia’s central bank voted to keep its policy rate unchanged at 4.25 percent. Spokesman Agustus from the Bank Indonesia(BI) said BI’s decision is consistent with its efforts to maintain stability and to push the country’s domestic economic recovery. Meanwhile, the bank remains aware of the increased risk from the uncertainty of the global financial market and will keep taking further actions to stabilize the exchange rate in accordance with its fundamental value while maintaining market mechanisms. BI also noted that the US$3.9 billion drop in Indonesia’s foreign exchange reserves in last February was mainly due to the intervention to prevent the rupiah from weakening too sharply.

Vietnamese firms to expand business occupancy in foreign markets
(19 March 2018) Vietnamese firms have nearly 1,200 investment projects in over 70 countries with total pledges in foreign investment reaching an estimated value of US$22 billion. A survey by Vietnam Report found out that in 2016, almost 45 percent of the 500 largest Vietnamese companies have said that they will make an investment abroad over the next five years. The Vietnam Ministry of Planning and Investment said the Vietnam government resolution in August 2016 which details the regulations on Vietnamese investment in foreign countries has provided a boost in Vietnamese outbound investment.

China and Brunei to boost economic ties
(20 March 2018) Brunei’s concerns about having to quickly diversify its sources of income within a short-term are seen as an opportunity by China to do investment in Brunei to expand its pool of Belt and Road partners. Furthermore, China also sees Brunei as the potential prospect to help the country pursue its interests in the South China Sea dispute. Generating total investments of US$4.1 billion to Brunei in 2017, China is currently Brunei’s largest foreign investor with the biggest investment project in Brunei comprising of a US$3.4 billion oil refinery and complex in Pulau Muara Besar Island. Aside from this, several Chinese firms have also invested in Brunei’s transport and telecommunications sectors.

Programs and initiatives by the Cambodian government to focus on its crop zoning and agriculture project
(22 March 2018) Cambodia Minister of Agriculture Veng Sakhon has requested Asian Development Bank to consider a new project to assist the country’s agriculture sector with crop zoning and climate change projects, as the two projects would be important in attracting investment and enhancing management and development of crops. Additionally, in effort to attract more attention to the country’s agriculture sector, Cambodia has also proposed the establishment of a government-private sector working group between its country and Thailand to tackle export issues surrounding the sector such as prices, market access, and infrastructure. With the establishment of the government-private sector working group, the Cambodia Agriculture ministry hopes that the suggested solution will be able to solve the outstanding issues and drive the agriculture export with Thailand forward.

Strong global trade outlook reignite Singapore firms’ interest to ASEAN
(21 March 2018) The stronger global trade outlook is reigniting Singapore companies’ interest in doing business with their overseas counterparts, especially in the ASEAN region. According to the Singapore Commercial Credit Bureau (SCCB), in 2017, overseas credit searches by local businesses rose by 3.04 percent, with ASEAN accounting for the highest proportion of overseas credit searches by Singapore firms for the fifth consecutive year, followed by East Asia and Europe. The proportion of credit searches made on ASEAN companies rose slightly from 27.17 percent in 2016 to 27.74 percent in 2017 with Malaysia, Indonesia, and Thailand topping the list.

Indonesia welcomes Australia into ASEAN
(18 March 2018) Indonesian President Joko Widodo has expressed that he is keen to have Australia as a full ASEAN member, as the country plays a crucial regional role in defence, trade and security matters with the other ASEAN countries. Joko Widodo said the economic and political stability of ASEAN region will be better off by the joining of Australia in the bloc. Since 1974, Australia has been a great dialogue partner of ASEAN, including the recent ASEAN-Australia Special Summit that was held in mid-March 2018 where issues related to regional security, economic relations to enhance trade liberalisation, as well as counter-terrorism measures were discussed.