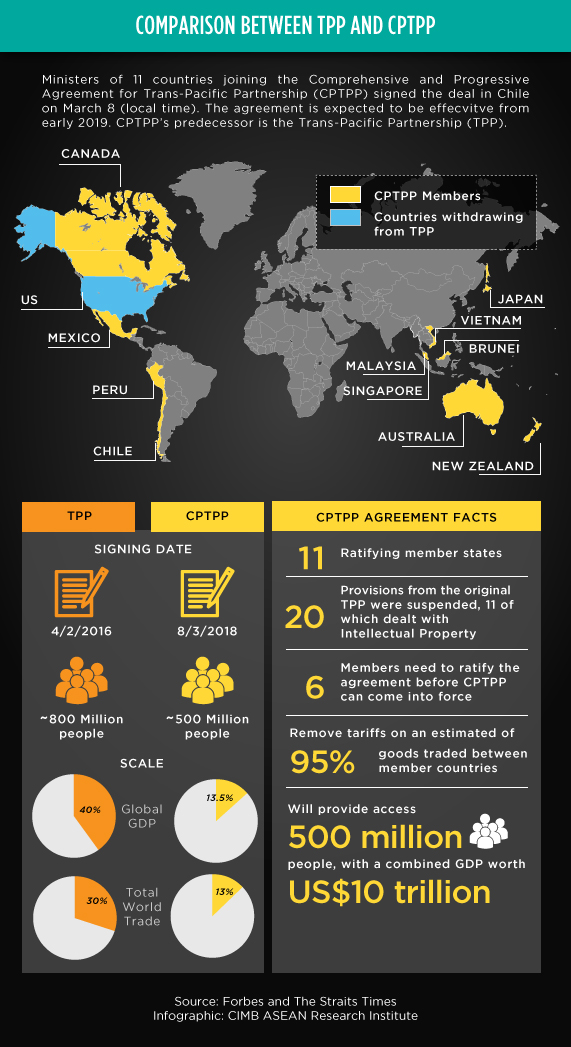 CPTPP to benefit Vietnam business operations
(12 March 2018) According to a recent survey conducted between December 2017 and January 2018, over 60% of Vietnamese businesses believe the newly-signed Comprehensive and Progressive Agreement for Trans-Pacific Partnership (CPTPP) will positively impact their business. The survey collected responses from 6,033 eligible companies and sampled 26 markets around the globe, which also include six of the member countries of the CPTPP – Australia, Canada, Malaysia, Mexico, Singapore and Vietnam. However, only 46 percent of around 1,000 firms based in these six markets anticipate positive benefits from the trade agreement.

ASEAN-Australia Special Summit concluded with shared commitment to boost cooperation
(18 March 2018) The first ever ASEAN-Australia Special Summit concluded on Mar 19th with the adoption of the Sydney Declaration that sets out shared commitment to boost cooperation on various issues. The Summit, chaired by both Australian Prime Minister Malcolm Turnbull and Singapore Prime Minister Lee Hsien Loong, discussed strategic cooperations in the areas of security issues – particularly cybersecurity, developing smart cities together and enhancing commitment to pursue trade liberalisation and regional economic integration. A memorandum of understanding aimed at combating international terrorism was signed on March 17th, focusing on developing capabilities to counter the use of technology in spreading dangerous ideology by the terrorists. Several initiatives were also announced during the summit, including a new digital standards to enable easier cross-border digital trade. Mr. Turnbull also announced investment worth AUD$30 million (US$24 million) to develop smart cities by setting up a knowledge bank of sustainable urbanisation ideas.

Philippines received record high FDI in 2017
(12 March 2018) The amount of foreign direct investments (FDIs) coming into the Philippines reached a new all-time high at US$10 billion in 2017, an increase of 21.4 percent compared to the amount recorded in 2016. In the same year, FDIs in manufacturing experienced a hike of 244 percent year-on-year to reach US$1.15 billion. The Bangko Sentral Ng Pilipinas (BSP) said investors continue to view the country as a favourable investment destination on the back of the country’s sound macroeconomic fundamentals and growth prospects. The Philippines is projected to have a population of more than 107 million by the end of 2018, with a fertility rate of 1.9 percent annually and a median age of around 23 years old, which according to the School of Statistics University of the Philippines Diliman, will bring a lot of growth opportunities to the Philippines economy.

Singapore ranks top in the most liveable city for Asian expats while Kuala Lumpur drops its ranking
(13 March 2018) Factors including low crime rates, easy access to good quality schools and healthcare, together with lower levels of pollution have helped Singapore to defend its top spot for ECA International’s Most Liveable City in the world. Australian city Brisbane and Japan’s Osaka took second and third place respectively meanwhile Kuala Lumpur, the capital city of Malaysia saw a drop in the rankings from 25th position to the 126th position. The drastic drop is attributed to the high pollution levels as well as relatively high rates of petty crime. Updated annually, ECA International Location Ratings measures the quality of expatriate living conditions in over 480 locations worldwide.

S&P Global Ratings raises concerns over poor financial records of state-owned-enterprises in Indonesia
(14 March 2018) International rating agency Standard & Poor’s (S&P) Global Ratings has raised concerns over the worsening balance sheets of state-owned enterprises (SOEs) in Indonesia that engage in the country’s massive infrastructure projects. Over the past few years, the agency noted that the SOEs have increasingly put themselves at risk with a significant upward trend in their debt-to-equity ratio due to their heavy reliance on the capital market to secure funding. In 2011, only 10 percent of state companies had a fourfold or greater debt-to-earnings ratio before interest, taxes, depreciation and amortization (EBITDA). However, the figure has gone up to 60 percent by 2017. S&P added that the government’s failure to assist the SOEs in seeking refinancing instruments for the debt could lead to a heavy debt maturity by 2020.

Thailand economic growth exceeds expectations
(14 March 2018) Thailand’s Central Bank Governor Veerathai Santiprabhob said the momentum of Thailand’s economic growth has exceeded expectations and its recovery has become more broad-based as benign inflation is allowing Thailand to keep interest rates near record lows despite a rising trend in global rates. However, Thailand’s central bank reiterated that the monetary policy needs to remain accommodative. The encouraging performance of Thailand’s economy has helped the Thai baht to near its four-year highs against the dollar, simultaneously making it Asia’s second-best performing currency this year after the Japanese yen.

Brunei to allocate US$5 million for the establishment of its stock exchange
(10 March 2018) A total of US$5 million has been allocated by the Brunei government for the establishment of its stock exchange that will help to initiate investors participation in equity investments and alternative stocks such as exchange-traded funds, foreign equity stocks, bonds, investment funds, securitised products and real estate investment trusts. In addition, Autoriti Monetari Brunei Darussalam (AMBD) said the stock exchange would boost the domestic financial sector, provide an alternative funding source for small businesses and improve the country’s corporate governance. The launch of a securities exchange has been discussed for years, but efforts are gathering pace with new capital market rules introduced in February last year.

ADB Green Climate Fund to assist Cambodia with climate-friendly agribusiness
(12 March 2018) The Asian Development Bank has announced an additional US$30 million in grants and US$10 million in loans to Cambodia as part of the organization’s Green Climate Fund. The funds will be an addition to the US$90 million the bank has already loaned the country to develop climate-friendly agribusiness value chains, according to a press release from the funding body. In 2014, the United States credit rating agency Standard & Poor’s ranked Cambodia’s economy and creditworthiness as the most vulnerable to climate change, out of a total of 116 nations evaluated.

Banks in Singapore to commit to inclusive hiring practices
(14 March 2018) 160 banks under the Association of Banks in Singapore (ABS) will adhere to a new set of human resource (HR) practices towards inclusive hiring. Singapore Senior Minister of State for Law and Finance Indranee Rajah said the HR advisory urged banks to hire staff based on skills required to perform the job, rather than a strict minimum number of years of experience or paper qualifications alone. The HR advisory was developed jointly by ABS, the Monetary Authority of Singapore, the Ministry of Manpower, the National Trades Union Congress, and the Singapore National Employers Federation.

Investment in technology provides a positive condition to small businesses in Malaysia
(14 March 2018) According to CPA Australia’s eighth annual Asia-Pacific Small Business Survey, Malaysia’s small businesses are experiencing positive business conditions, with many adding jobs and investing in technology as these firms continue to be strong users of digital technologies in their business. Among businesses surveyed, about 53.4 percent earned over 10 percent of their income from online sales, and over 80 percent use social media for business purposes. However, the relatively strong focus on technology by small businesses in Malaysia raises concerns over the security of systems, with more than 52.4 percent of respondents stated that they believe it is likely that their business will be cyber attacked in 2018.

Laos to enforce trademark protection for its commodities
(14 March 2018) To create economic opportunities and raise Laos trade standard, all commodities produced in Laos will have a trademark under the Madrid Protocol. This new regulation will allow all commodities from Laos to obtain trademark protection in many countries around the world, which is more effective than seeking protection separately from each individual country. Upon implementation, Laos will be the fifth ASEAN country to use this system.