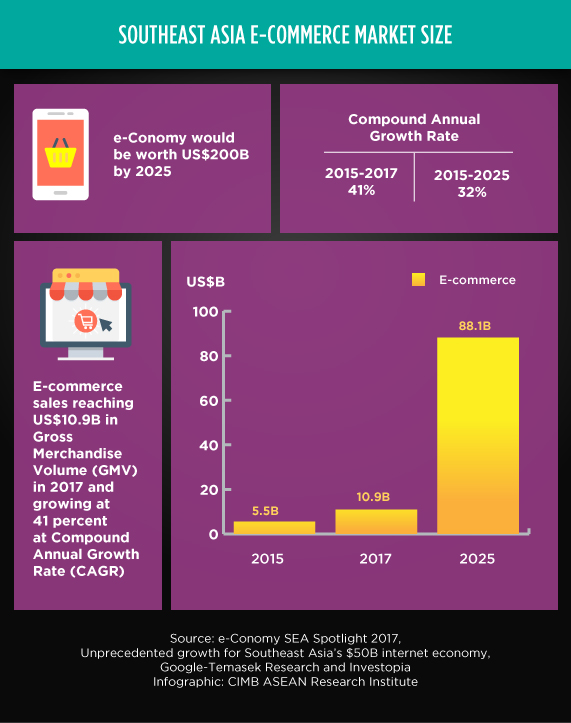 Asean saw unprecedented growth in internet economy
(26 February 2018) Asean’s internet economy attracted US$13 billion in investment since 2015 where there were close to 1,400 southeast Asia deals involved in series A and seed rounds between 2016-2017, according to a new report “e-Conomy Southeast Asia Spotlight 2017”. Asean itself has grown seven unicorns, namely Grab, Lazada, SEA, Razer, Go-Jek, Tokopedia and Travelok. As much as US$9 billion of funding was injected into the unicorns between 2016 to the third quarter of 2017. Ride-hailing services are the fastest growing segment at 43% CAGR with top players expanding into services and payments, while online travel segment took the lion market share with US$6.2 billion, followed by e-commerce with US$1.8 billion.

VASEP to assist Vietnam with concerns over IUU fishing
(28 February 2018) The Vietnam Association of Seafood Exporters and Producers (VASEP) will offer alternatives to Vietnam to overcome the European Commission’s illegal, unreported and unregulated fishing (IUU) yellow card on Vietnamese fisheries. Suggesting several immediate measures to overcome the yellow card on IUU, VASEP wanted to collaborate with Directorate of Fisheries (DoF) to organise a conference to assess the challenges faced by the sector. On October 23rd 2017, the European Commission (EC) had issued a yellow card warning against Vietnamese seafood due lack of effort in combating IUU fishing.

Industrial sector is still reliant on garment factories
A summary of Cambodia’s industrial sector over the past five years released by the government shows an increase in growth across a wide variety of indicators. According to the report released by the Cambodia Ministry of Industry and Handicrafts (MIH), the country’s economy has long been reliant on the garment sector. As of 2017 last year, the employment rate in the garment industry made up of 86 percent of the 982,203 people that were employed in the industrial sector. More than US$10.79 billion revenue was generated by factories in Cambodia, with US$7 billion coming from the garment industry, while domestic industries generated another US$2.62 billion.

Positive outlook for Indonesia GDP growth
(26 February 2018) Exceeding the consensus estimate of 5.1 percent growth, Indonesia’s economy expanded by 5.2 percent year-on-year (YoY) in the fourth quarter (4Q) of 2017. The positive economic figures came in as a surprise as stronger domestic demand helped offset moderating exports. According to the Indonesian Central Bureau of Statistics (BPS), investment growth in terms of gross fixed capital formation has reached 7.3 percent YoY since 2013, hitting its four-year high. This positive signal may relate to the improved ranking of Indonesia in the World Bank’s Ease of Doing Business index from 91 in 2016 to 72 in 2017 last year.

Laos records low inflation rate due to CPI contraction of consumer goods
(27 February 2018) Despite the rise in living cost, the Lao National Statistics Bureau said inflation remains low in the country. The change in the year-on-year Consumer Price Index (CPI) has remained low with the annual change at 0.97 percent. In January, the bureau announced that the CPI was at 109.91 points, a 0.27 percent change compared to the previous month. According to the bureau’s monthly report, the low inflation is due to CPI of consumer goods categories, which is based on the rate of inflation in the country.

Asean energy project to be financed by ADB
(26 February 2018) In order to develop and enhance renewable energy capacity in Asean member countries, the Asian Development Bank (ADB) signed a loan worth US$235 million to one of the largest power producers in Thailand. The project will involve the execution and operation of distributed and utility-scale solar, wind, biomass, waste-to-energy, and gas-fired power, as well as energy storage. By 2022, the firm total distributed power generation capacity is expected to increase by over 50 percent to 2,500 megawatts (MW), while there will be an increase from 10 to 30 percent of the renewable energy share in its portfolio. In July 2017, ADB took a US$57.7 million equity stake in the firm as part of the company’s initial public offering.

Companies to comply with Philippines’ data privacy law
(2 March 2018) A European foundation urged companies to comply with the Philippines’ data privacy law set by the National Privacy Commission (NPC). Republic Act (RA) 10173, or the Data Privacy Act of 2012 requires companies with at least 250 employees or more who have access to personal data of at least 1,000 people to have a data protection officer (DPO) and register their data processing systems with NPC. In enforcing data protection laws, Philippines, Indonesia and Thailand still show limited data security laws compared to Singapore which has a robust standard.

Optimistic outlook for Vietnam wood products due to high demand in export orders
(1 March 2018) The Handicraft and Wood Industry Association (HAWA) of Ho Chi Minh City, Vietnam said the future looks promising for the country’s wooden products due to the ongoing demand from existing and new buyers until end of 2018. The association is confident that the target of earning US$8.66 billion from exports of wood and wooden products can be easily achieved. To meet the demand, wooden firms producing products need to invest in upgrading firms production technologies and embrace automation to improve quality and productivity. In 2017, export of wooden products from Vietnam accounted only 6 percent out of total US$7.66 billion generated from wood exporting products.