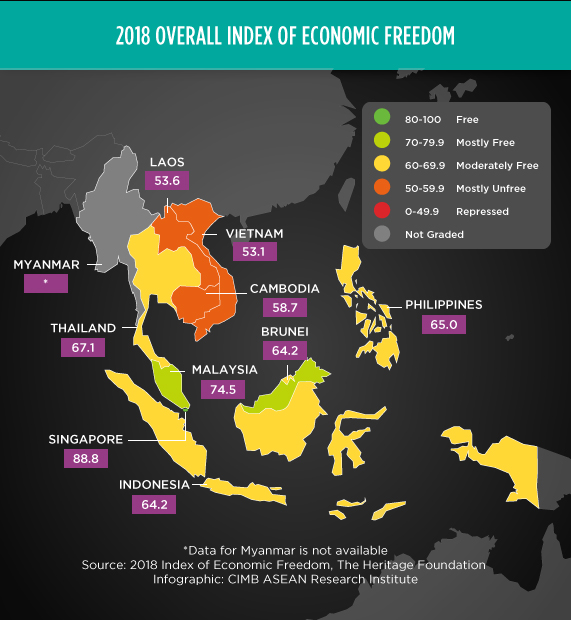 Brunei economic freedom ranking
(19 February 2018) According to the 2018 Index of Economic Freedom released by the Heritage Foundation, a Washington-based think-tank, Brunei Darussalam is ranked 70th, with a score 64.2 for economic freedom. Whereas among ASEAN countries, Singapore ranked 2nd, Malaysia ranked 22nd, Thailand at 53rd, the Philippines at 61st, Indonesia at 69th, Brunei at 70th, Cambodia at 101st, Myanmar at 135th, Laos at 138th, and Vietnam 141st respectively. Compared to 2017, Brunei’s score has decreased by 5.6 points with a drop in the fiscal health making. The think tank also noted that lower scores in property rights, monetary freedom and labour freedom affected the sultanate’s ranking.

New tax data integration system to improve data transparency
(22 February 2018) Indonesia has introduced a new tax data integration system which aims to improve taxpayers data transparency. Indonesia state-owned energy company Pertamina is the first company to participate in the system. The system allows the directorate general to monitor data such as purchases, sales and employees’ salaries of participating companies’ and the company could also pay taxes and file reports automatically. Indonesia State-owned Enterprises Minister Rini Soemarno said the system is expected to reduce disputes between the tax office and taxpayers. About 30 Indonesian SOEs will be asked to join the system.

Cambodia-Thailand target bilateral trade flow to reach US$15 billion by 2020
(22 February 2018) Thailand and Cambodia are working towards their goal of reaching US$15 billion of trade flows by 2020. To do so, Thailand will encourage domestic investors to expand their investment across the border to develop the country’s capabilities, especially in information technology, software and digital services. Thailand’s exports to Cambodia are mainly oil, gems and jewellery, and beverages, whereas Thailand imports food and other vegetables, gold and gems, and metallic ore from Cambodia. Thailand is the 9th largest country that had invested in Cambodia from 1994 to the end of the third quarter of 2017. China led the list, South Korea second, followed by the UK in the same period.

Bank of Thailand to increase scope for banking agents
(20 February 2018) The Bank of Thailand plans to increase the business scope of banking agents to money withdrawals and retail payment services. Assistant Governor, Financial Institution Policy Group Bank Of Thailand Somboon Chitphentom said the amended regulation will require banking agents to have physical service points, suitable equipment and clear-cut operational processes. This will provide banks more flexibility in distribution channel models, financial services and transactions and service hours. Under the amended regulation, banking agents are allowed to provide a maximum money withdrawal of 5,000 baht per transaction, and retail payment of 20,000 per day.

Malaysia wins WTO praise for economic achievement
(17 February 2018) Members of the World Trade Organisation (WTO) commended Malaysia for its impressive economic achievement, prudent trade and economic policies. Forty-three members who participated in a question and answer session at the 7th Trade Policy Review (TPR) in Kuala Lumpur also commended Malaysia for actively pursuing trade openness through unilateral reforms, regional and bilateral trade agreements and multilateral rule-making. According to Malaysia’s Ministry of International Trade and Industry (MITI), the move to rationalise subsidies on fuel and sugar among others indicates Malaysia’s willingness to move towards a market-oriented mechanism. The ministry also added that Malaysia reaffirms its commitment to adhere to WTO’s rules and principles during negotiations for free trade agreements.

New Vietnamese decree set to may end affect Indonesian automotive exports to the country
(19 February 2018) Vietnamese authorities issued Decree No. 116/2017/ND-CP on requirements for the manufacturing, assembly and import of motorized vehicles and trade in motorized vehicle warranty and maintenance services, which specifies an array of requirements, including ratings on emissions and safety of imported vehicles. This decree, which took effect on 1st Jan, may put an end to Indonesian automotive exports to Vietnam as the Indonesian National Standards (SNI) would be unable to fulfil the criteria imposed by the new decree. Indonesia’s Trade Ministry’s Director General for International Trade Oke Nurwan said representatives from the Ministry of Transportation, Ministry of Industry and the Indonesian Automotive Association (Gaikindo) would discuss the issue and take a persuasive approach with the Vietnamese authorities. Under the new Vietnamese decree, Indonesia will lose up to US$85 million of vehicle exports to Vietnam.

New Vietnamese decree set to may end affect Indonesian automotive exports to the country
(22 February 2018) According to the Philippine Statistics Authority (PSA), total foreign investment pledges for the Philippines fell by more than half in 2017. Total foreign investment pledges approved by seven investment promotion agencies last year totalled US$2.03 billion ( P105.6 billion), lower by 51.8 percent from US$4.22 billion (P219 billion) in 2016. The seven agencies are the Board of Investments (BOI), Philippine Economic Zone Authority (PEZA), Clark Development Corporation (CDC), Subic Bay Metropolitan Authority (SBMA), Authority of the Freeport Area of Bataan (AFAB), BOI-Autonomous Region in Muslim Mindanao (BOI-ARMM), and Cagayan Economic Zone Authority (CEZA). However, the combined amount of foreign investment and pledges from Filipinos in the 4th quarter of 2017 increased by 2.8% compared to the same period in 2016.

Budget 2018 introduced new taxes
(19 February 2018) Singapore Finance Minister Heng Swee Keat presented the Government 2018 Budget with measures to develop an innovative economy, a smart and green city, a caring and cohesive society, and a fiscally sustainable future. For the first time in more than a decade, the goods and services tax (GST) will be increased from 7 percent to 9 percent and will be implemented between 2021 to 2025. Singapore government will also impose a tax on digital services from overseas suppliers, even if they do not have a physical presence in Singapore, beginning 1 Jan 2020. The government will also introduce carbon tax where all facilities that produce more than 25,000 tonnes greenhouse gas emissions a year will be taxed on their total emissions. Between 2019-2023, the carbon tax will be SGD5 per tonne of greenhouse gas emissions. The Government plans to increase the rate to between SGD10 and SGD15 per tonne of emissions by 2030.