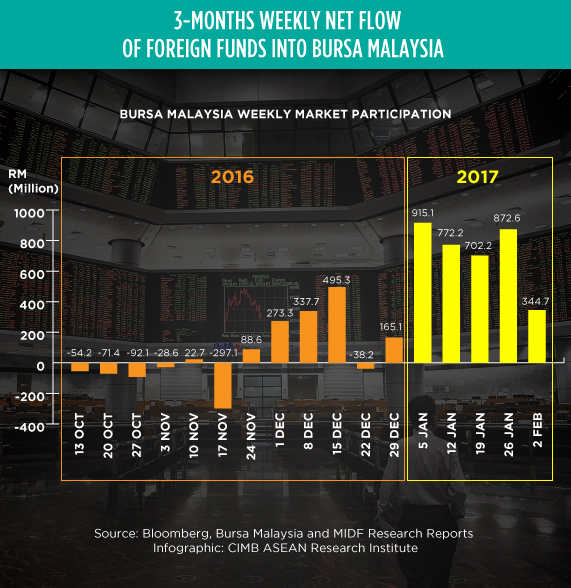 Liquidity to boost from Malaysia – Singapore new trade link
(6 February 2018) Bursa Malaysia Bhd and Singapore Exchange Limited recently announced for an establishment of new trading link between both stock markets as part of efforts to reduce costs associated to trading as well as to foster greater cross-border investment. The new trade link would permit investors to trade and settle shares in more coherent ways on either stock market. Malaysian Prime Minister Dato’ Seri Najib Tun Razak said that the combined market capitalization of more than US$1.2 trillion and about 1,600 public listed companies would allow for a smooth access between both markets. According to CIMB Research, the linking of the trade will also benefit retail sectors as it enables a more efficient transaction experience for participating investors. Based on CIMB’s estimation, a 1.0 percent increase in market trading value will be able to grow net profit by about 0.7 percent on Bursa Malaysia 18-20FY.

Philippines investment pledges soar in January 2018
6 February 2018) In January, pledges on investment that has been approved by the Philippines Board of Investments (BOI) surged 538 percent to US$1.0 billion (PHP51.3 billion) from US$0.15 billion (PHP8.0 billion) in the same month last year. Other notable projects mentioned by BOI are the renewable energy projects amounting to US$0.5 billion (PHP27 billion), followed by water supply and distribution projects at US$0.3 billion (PHP13.9 billion). Trade Secretary and BOI Chairman Ramon Lopez said that this reflects the strong confidence of investors in the Duterte administration, positive reforms and programs being undertaken by the country to move forward.

Growth in trade between India and Asean
(3 February 2018) To improve cooperation between both regions, India and Asean are in the process of negotiating agreements on trade and services. India had shared a total exports and imports of approximately 11.2 percent and 10.56 percent respectively, between 2016-2017. As of 2015, to strengthen the engagement with Asean and Asean centric processes, India had also established a separate mission to Asean. Recently, Prime Minister of India Narendra Modi invited leaders from all ten Asean nations to join him in the India Republic Day celebrations.

Indonesia to approve ASEAN act on banking sector liberalisation
(7 February 2018) Sixth Package of Commitments on Financial Services under the ASEAN Framework Agreement on Services (AFAS) will be undergoing a protocol ratification by the Indonesian government and the House of Representatives. Institutions will be allowed to operate in other ASEAN countries and receive equivalent treatment with other domestic banks under the AFAS, Qualified ASEAN Banks (QAB) protocol. Indonesia Finance Minister Sri Mulyani Indrawati said that currently, there are two QAB from Malaysia that are operating in Indonesia, which are CIMB Niaga and Maybank. By ratifying the protocol, banks from other ASEAN countries will be allowed to open their branches in Indonesia.

Large building to have new energy code
(9 February 2018) By the middle of 2018, buildings with space area that have more than 10,000 square meters need to abide to a new building energy code (BEC). Director General of the Energy Policy and Planning Office (Eppo), Twarath Sutabutr said under the new regulations, property developers will need to design and manage the new buildings by following specific criteria including the expectation of cutting electricity consumption by 10 percent. He added that over the next 20 years, BEC regulations will aim towards reducing the energy consumption by 13.7 billion kilowatt-hours, representing a power bill of approximately US$1.5 billion (THB 48 billion).The new BEC regulations is an effort of Department of Alternative Energy Development and Efficiency (DEDE), the Architect Council of Thailand and the Engineering Institute of Thailand to form a standard guideline in creating more value-added buildings using eco-friendly designs to attract buyers and tenants.

Alibaba’s financial technology to benefit OFWs
(8 February 2018) Ant Financial Group, a unit of Alibaba owned by Jack Ma is keen on helping the Philippines by bringing inclusive financial services to overseas Filipino workers (OFWs). Through financial technology solutions, more than 10 million Filipinos working abroad will benefit through the usage of mobile payment which will reduce the cost of remittance for OFWs. Philippine Finance Secretary Carlos Dominguez III also said that this approach will be able to help them to have a better management of cash and their earnings. In October 2017, Jack Ma met Philippines President Rodrigo Duterte in Malacanang, Philippines to discuss about providing opportunities in the country to boost its mobile technology, internet banking and e-commerce industry.

2017 sees 30 percent grow in Cambodia-Vietnam trade
(6 February 2018) Bilateral trade between Cambodia and Vietnam in 2017 surged nearly 30 percent to about US$3.8 billion with Vietnam’s trade exports and imports to and from Cambodia going up by 26 percent and 40 percent respectively. According to additional data from the United Nation’s International Trade Statistics Database, Cambodia had reported a total of US$1.6 billion worth of trades with Vietnam in 2016.

Malaysia’s 2017 exports strongest since 2015
(7 February 2018) In 2017, Malaysia’s total export rose at almost 19 percent and to a record high of US$237.4 billion (RM 935.4 billion), which was the strongest growth since 2005. The Ministry of International Trade and Industry (MITI) said that as world prices improved, Malaysia has recorded a sharp rebound in export growth. Additionally, Malaysia’s stellar export growth of major commodities was also driven by strong global demand for smart electronics as there was a production increase of electrical and electronic (E&E) products which from US$0.4billion (RM 1.7 billion) in 2016 to US$7.3 billion (RM 28.7 billion) in 2017.

Indonesia’s annual economic growth to rise 5.6 percent
(7 February 2018) Led by robust domestic demand, The International Monetary Fund (IMF) said Indonesia’s annual economic growth will gradually incline to about 5.6 percent over the medium term. 2018 annual gross domestic product growth rate was projected in the IMF annual review of Indonesia’s economic policies report to be at 5.3 percent, compared with 5.1 percent annual growth in 2017. The IMF board emphasized that the priority should be given to financing infrastructure with domestic revenue, as well as greater participation from the private sector. The IMF board also urged for the Indonesian authorities to minimize the control of the state and the role of state-owned enterprises in some related economic sectors.

MoneyGram and GCash collaborate to drive financial inclusion
(8 February 2018) MoneyGram and Gcash announced a new collaboration to drive financial inclusion in the Philippines that will provide their beneficiaries with the best services in user-friendly, rapid-response and low-cost money transfer by emerging their capabilities in remittance and digital payments. With over 30 million active smart mobile users and expanding internet penetration in the Philippines, MoneyGram’s strategy is to offer consumers with various options of transferring their money and receiving their money conveniently, to and from remote unbanked and underbanked Filipinos communities. In 2017, accounting for 9.9 percent of the country’s GDP, Philippines was the world’s third largest remittance recipient with US$32.8 billion inflows.