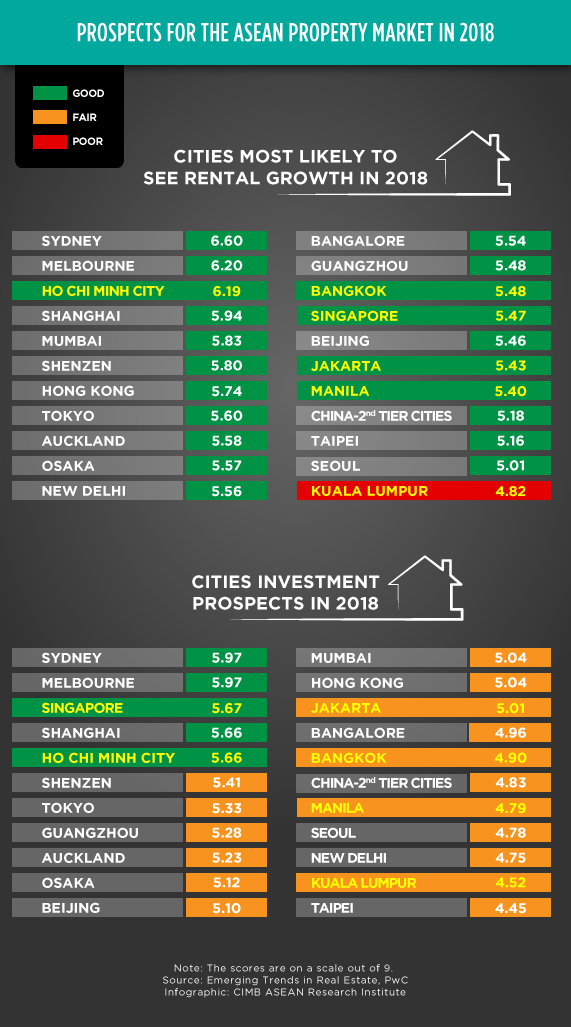 Singapore private home prices to recover in 2018
(10 January 2017) Credit Suisse Group and Morgan Stanley are calling the end of Singapore’s property downturn after a second consecutive quarterly increase in private residential prices. Morgan Stanley says that the home sales may increase 40 percent in 2018 with the recovery in housing extending through 2019. Morgan Stanley believes that the surge in home completions from 2021 could begin to dampen sentiment but prices could double by 2030. Private residential prices rose 1 percent compared with a 3.1 percent decline in 2016.

Deficit in trade to pressure Philippine Peso
(10 November 2018) Philippines posted a record trade deficit in November as exports faltered, adding pressure on the currency. The trade deficit was US$3.8 billion, the widest since at least 1980. Emilio Neri, economist at Bank of the Philippine Islands in Manila, said, “2018 is supposed to be a banner year for government infrastructure projects It should again translate to further expansion in capital importation. The adjustment that will follow is on the currency”. According to Bloomberg, the peso currency was down 1.7 percent in the 12 months of 2017, the worst performer in Asia.

Economic reform will not be affected by regional elections
(10 January 2018) Indonesia’s Finance Minister Sri Mulyani Indrawati said that the government won’t be distracted from its economic reform program by provincial elections to be held this year. The local elections have caused some concern that a heated political environment could hamper efforts by President Joko Widodo’s administration to push through reforms. Moody’s Investor Service said that in India and Indonesia, regional elections are likely to slow down any reform momentum. Last year, elections for governor of the capital Jakarta saw political and religious tensions hit the highest in decades.

China and Vietnam pledge cooperation
(10 January 2018) China is willing to work with Vietnam to push bilateral cooperation to achieve more outcomes. Li Keqiang, Chinese Premier, said that the China-Vietnam comprehensive cooperative partnership is steadily advancing. Li made the remarks while meeting with his Vietnamese counterpart, Nguyen Xuan Phuc, on Wednesday on the sidelines of the second Lancang-Mekong Cooperation (LMC) leaders’ meeting held in the Cambodian capital of Phnom Penh.As for Vietnam, the country is willing to continue high-level exchanges and enhance cooperation with China.

Chinese investors showing interest in Cambodian property market
(11 January 2018) Chinese investors are flocking to Phnom Penh, as the target market for many of its largest project. Mr Ross Wheble, the country manager for Cambodia at the real estate consultant Knight Frank said that, “It is only within the past 18 months that we have started to see the entry of Chinese developers and individual investors”. He added that 2018 will be going to be a big in terms of high-end homes coming on line.

Thailand to work with ASEAN neighbours to ensure rebound in rubber price
(6 January 2018) Rubber prices are expected to rise to US$1.87 a kilogramme in the first quarter after Thailand, Indonesia and Malaysia pledged to withhold exports of natural rubber until March 2018. Luckchai Kittipol, the Honorary President of Thai Rubber Association and Director of the International Rubber Consortium Ltd (IRCo) said the major share under the joint scheme will come from Thailand. In 2018, world rubber demand is projected to increase by 2.3 percent to 12.4 million tonnes.

India pushes forward its ASEAN agenda
(10 January 2018) The Indian government is setting itself up as an alternative to China as it seeks to woo ASEAN. New Delhi is gearing up for the ASEAN-India commemorative summit under the of theme “Commerce, Connectivity and Culture”. India will emphasise that it is attuned to what is believed to be the “ASEAN way of doing business” and committed to the idea of “centrality” of the region.The summit itself will get underway with a preparatory meeting of senior officials on January 23, as well as a ASEAN-India business council and business conclave.

Myanmar confident of strong growth in 2018
(8 January 2018) The second Myanmar Business confidence survey conducted by Roland Berger in partnership with the UMFCCI in the latter half of 2017 shows a significant drop in short-term business sentiment from 73 percent in 2016 to 49 percent in 2017. In spite of these unfavourable factors affecting the outlook, foreign direct investment has increased substantially, according to Aung Naing Oo, director-general of the Directorate of Investment. Myanmar Finance Minister Kyaw Win confident of the strong growth in 2018 likened the economy to an airplane on the runway about to take off.