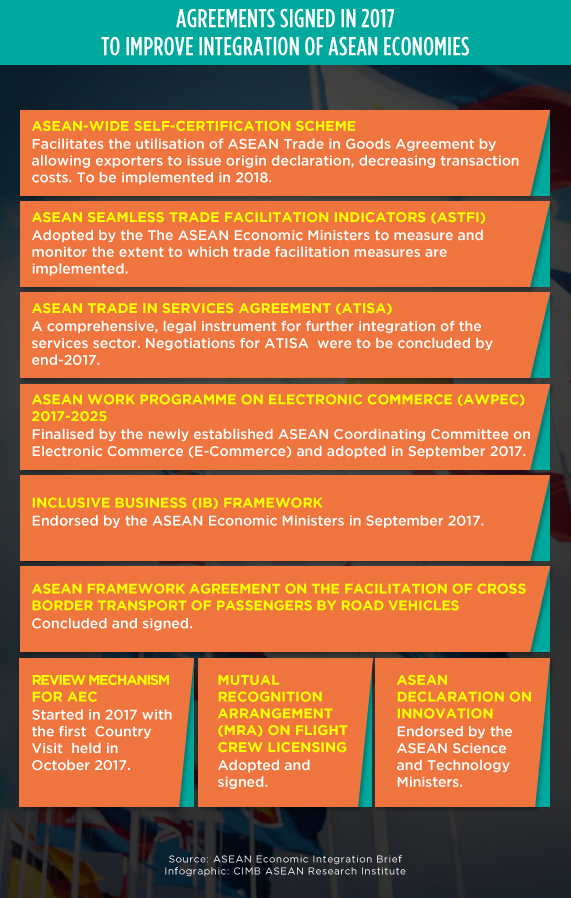 World Bank says that full integration is needed for ASEAN
(1 January 2018) The World Bank Vice President for East Asia and Pacific, Victoria Kwakwa said that ASEAN member states (AMS) need to reinforce their commitment towards the common goal of real integration and persevere in order to achieve it. She stressed that member countries should now focus on non-tariff barriers to archive (replace with acheive) full integration. Agreed upon in 2015 in Malaysia, the new AEC Blueprint 2025 was created to ensure all 10 AMS would be economically integrated by 2025.

Indonesian government confident of stronger economic position in 2018
(28 December 2017) Indonesia’s economy is expected to be in a stronger position in 2018 as the government forecasts the economy to expand 5.4 percent. With trade surplus reaching its highest in almost six years in September 2017, the export boom across Southeast Asia has benefited Indonesia.The government plans to bring the country’s deficit down to 2.2 percent of GDP in 2018 from an estimated 2.9 percent in 2017.

India’s External Affairs Minister to tour three ASEAN countries
(2 Januari 2018) Indian Minister of External Affairs Sushma Swaraj will embark on a five-day visit to Thailand, Indonesia and Singapore to boost India’s ties with the three nations. In Thailand, she will meet her counterpart to hold extensive talks with an aim to expand bilateral cooperation. In Indonesia she will co-chair the fifth meeting of India-Indonesia Joint Commission with her Indonesian counterpart and in Singapore, she will also have bilateral meetings with Singaporean leaders.

Economic growth in Thailand to slow in 2018
(2 January 2018) The strength of Thailand’s 2017 economic recovery is expected to wane in 2018. Thailand’s growth is lagging peers with economies in Vietnam and Philippines expanding more than 6 percent in 2017. While certain sectors such as exports and tourism may give a boost to the waning growth, private investment remains low, wages are weak and debt burdens for households and companies are elevated, add to risks that the recovery may falter.Thailand’s expansion has slowed this decade, averaging 3 percent through 2016 compared with 4.6 percent in the 10 years through to 2010.

Vietnam launches digital knowledge database project
(2 January 2018) All Vietnamese can now participate in spreading knowledge conveniently and effectively via the country’s newly launched “Digital Vietnamese knowledge system” project. The Wikipedia-like portal is tailored for Vietnamese and comprises an open database which aims to provide access to a comprehensive knowledge system especially to Vietnamese youth to develop cutting-edge technologies on the basis of big data, Internet of Things (IoT) platforms and artificial intelligence.

Price of palm oil in Malaysia decreased by 20 percent in 2017
(30 December 2017) Palm oil prices have been trending downwards since November 2017, after India raised import taxes on edible oils to their highest. Palm oil futures lost 3.8 percent in December, and have shed nearly 20 percent of their value in 2017. Malaysian palm oil production is seen declining through the first quarter of next year, in line with seasonal trends. Output fell 3.3 percent to 1.94 million tonnes in November 2017. However, demand for palm oil is expected to improve in the coming weeks as key buyer China stocks up for Lunar New Year celebration.

Cambodia Security Exchange raises limit on market fluctuations
(1 January 2018) The Cambodia Securities Exchange (CSX) has decided to increase its daily limit on share price fluctuations.The CSX originally set its daily price limit at a relatively low 5 percent in an effort to maintain stability. Lamun Soleil, Director of Market Operation at CSX said ould attract investors to trade more actively. After six years of operations, CSX has decided to loosen its reins on the market and increase the limit to 10 percent increasing the likelihood of significant capital gain for traders.

Three major towns to be given city status in Laos
(2 January 2018) To fast track socio-economic development in Laos provinces and enhance relations with other cities in the region the Lao government is keen to upgrade three major towns – Luang Prabang, Kaysone Phomvihane and Pakxe – to cities. To qualify for city status, a municipality must have a population of not less than 80,000, be financially self-sufficient and have essential infrastructure. Once these towns are fully designated cities, they will be able to develop more quickly and have better facilities.