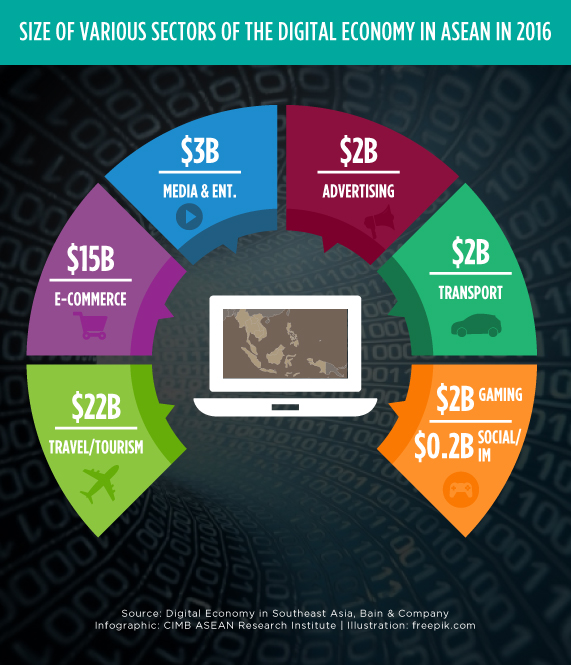 Thailand digital economy continues to grow rapidly
(26 December 2017) The Center for Economic and Business Forecasting of the University of the Thai Chamber of Commerce (UTCC) expects the Thai digital economy to expand 25 percent in 2018 to US$1 billion (baht 3.2 trillion), making up approximately 19 percent of the economy. Recently, the government implemented the PromptPay scheme, which is aimed at hastening Thailand’s transition to a cashless society while other banks are building up the financial infrastructure to support digital payments. This is all part of Thailand’s 4.0 policy to implement e-government services and expand Internet infrastructure to all communities.

Economists upbeat about growth of ASEAN-5 in 2018
(26 December 2017) Economists are upbeat about growth in ASEAN countries, with most raising their growth forecasts for 2018. In the the most recent quarterly survey of major economies in Asia, The Japan Center for Economic Research and Nikkei, found that economists felt that Southeast Asia will see faster growth aided by a combination of strong exports, namely in the electronics sector, and solid domestic demand. The weighted average growth forecast for the ASEAN-5 in 2017 was revised upward 0.2 point to 5. percent from the previous survey, as estimates for Malaysia, the Philippines, Singapore and Thailand were raised.

Pharmaceutical sector to expect higher growth in 2018
(26 December 2017) Vietnam’s pharmaceutical market is estimated to hit revenues of US$5.2 billion in 2017, a 10 percent increase from 2016. The average Vietnamese spent US$9.85 in 2005 on drugs which rose to US$56 in 2017. Spending on drugs is forecast to double to US$85 per person in 2020 and US$163 in 2025. Approximately 75 percent of Vietnamese pharmaceutical companies expect to grow by 10 percent in 2018. The market is considered promising to foreign investors and multinational groups in 2018 with foreign firms like Sanofi, Taisho and Abbott entering the market.

Import tariff on tobacco to be raised in 2018
(28 December 2017) In 2018, Indonesia will increase the excise duties on tobacco products and import tariffs on tobacco in order to increase government revenue as well as enhance the welfare of Indonesia tobacco producers. However, the exact rate of increase is yet unknown. Currently, the Indonesia government imposes a 5 percent import duty on tobacco which is considered low by Indonesian cigarette manufacturers. According to the Indonesia Central Bureau of Statistic, tobacco imports have reached US$318.49 million in value in the period between January to July 2017, an increase of 16.11 percent compared to the same period last year.

Tax law first legislative victory for Duterte Administration
(26 December 2017) According to Philippines Finance Secretary Carlos G. Dominguez III, the Tax Reform for Acceleration and Inclusion (Train) Act will benefit even those who are not paying taxes. He said that as a result of the Train Act and taxes collected all Filipinos will benefit from higher spending for education, healthcare and other forms of human capital development allowing many to lift themselves out of poverty in what he called “the first major legislative victory for the Duterte administration and the Filipino people in 2017”. Recently, package 1A of the Train Act was signed into law and it would slash and restructure personal income tax rates which have been the same for two decades starting January 2018. The new regulation would also see new taxes or higher tax rates for the consumption of oil, cigarettes, sugary drinks, and vehicles.

Consumer prices rise 0.6 percent in November
(26 December 2017) Singapore inflation continued to remain subdued in November despite the increase in prices of healthcare, transport and education. The biggest gains in consumer prices came from transport and education at 2.6 percent increases year-on-year.This was followed by healthcare at 2 percent, and food and communication at 1.5 percent each. Inflation was up 0.6 percent against year-ago prices and up 0.4 percent on the the previous month’s prices. Core inflation which excludes accommodation and private road transportation costs, was 1.5 percent, unchanged from the previous month.

Government to attract buyers for small idle properties
(26 December 2017) The government is looking at bundling together small idle real estate properties in its efforts to make them more attractive to buyers. Philippines Finance Secretary, Carlos G. Dominguez III has instructed the Privatization and Management Office as well as the Philippine Deposit Insurance Corporation to dispose of the properties in packages beginning mid-2018. Currently, Bangko Sentral Ng Pilipinas has about 26,000 titles of foreclosed properties.

Industrial development plan at 90 percent on track but SMEs struggling
(25 December 2017) An ambitious 10-year plan to boost the country’s industrial development is “90 percent” on track. Council of Ministers spokesman Phay Siphan said the main areas of progress so far included the development of the agriculture industry, promotion of small and medium-sized enterprises (SMEs), expanded opportunities for vocational training, promotion of human resources, and further development of transportation logistics. However, Te Taing Por, president of the Federation of Association for Small and Medium-Sized Enterprises of Cambodia, said the SME sector has been stunted due to the government’s failure to adopt SME-friendly regulations.

Increase in number of registered companies in Brunei
(25 December 2017) There has been a 12 percent increase in the number of companies registered in Brunei in the third quarter of 2017. According to a statement from Autoriti Monetari Brunei Darussalam (AMBD), Brunei’s central bank, the increase is due to the reforms in the country’s business infrastructure and improvements in the economic climate. Brunei was listed as the world’s most improved country in the Doing Business 2018 report released by the World Bank, with its ranking improving from 72nd to 56th.

Laos to benefit over US$5 billion investment from Vietnamese companies
(22 December 2017) According to the Lao Ministry of Planning and Investment, 423 Vietnamese projects, in hydropower, mining, transport, industrial tree plantations and services, worth more than USD $5 billion have been given licenses. Investment by Vietnamese companies are expected to add US$350-400 million to the Lao state budget and create approximately 40,000 jobs.