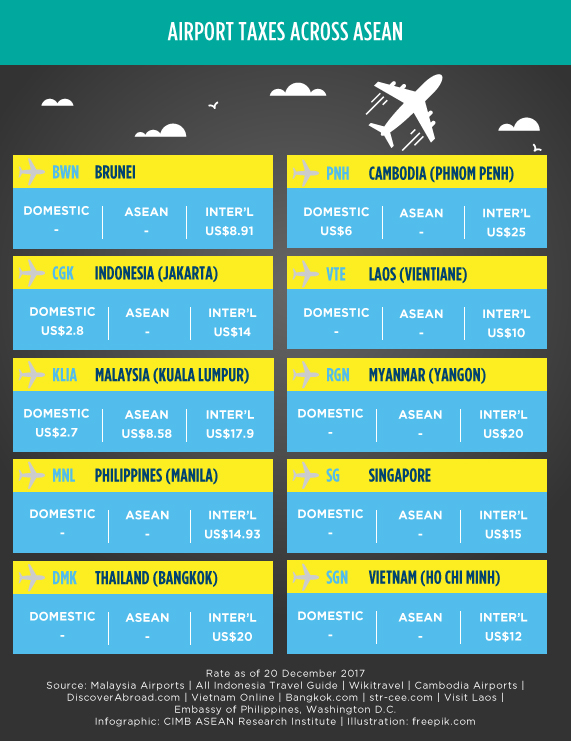 Critics voice concern over Malaysia’s plan to increase airport tax
(18 December 2017) The Malaysian government announced that it will be imposing higher passenger service charges at Kuala Lumpur International Airport 2 (KLIA2) to bring KLIA2 in line with taxes charged at the full-service carrier terminal, KLIA. Critics say that the move could erode Malaysia’s competitiveness as the regional hub for low-cost carriers. Abdullah Ahmad, the Executive Chairman of the Malaysia Aviation Commission (MAVCOM) said the government will have to fork out 60 million ringgit in subsidies if it does not raise charges at KLIA2. In 2016, 27 million passengers used KLIA2, compared to the 25.5 million that used KLIA.

Gold and chemicals push Singapore exports up 9.1 percent in November
(18 December 2017) Singapore’s key exports rose 9.1 percent in November. The better-than-expected results came from the gold and chemicals industries. According to International Enterprise Singapore, electronics exports increased by 5.2 percent, while shipments of semiconductors grew 9.6 percent and exports of disk media products were up 21.6 percent from a year ago. According to a quarterly survey by the Monetary Authority of Singapore, the region is expected to grow by 3.3 percent this year, which will be the fastest in three years due to a surge in electronics manufacturing.

Vietnam to face further tariff removals in 2018
(18 December 2017) According to the ASEAN Trade in Goods Agreement (ATIGA), Vietnam will have to cut 669 tariff lines to zero percent in January 2018. Among some of the products that will be affected are automobiles and spare parts, vegetable oil, refrigerators, air conditioners and dairy products. As a result, the prices of products will be more competitive and their quality will be higher. Observers expect that the Vietnam government will experience an estimated of US$194 million (VND 4.4 trillion) of revenue loss when the import tariffs on automobiles go down to zero.

Investment approvals in Philippines hit record high in 2017
(19 December 2017) Investment approvals by the Philippines Board of Investments (BOI) soared to an all-time high as this year hitting P617 billion (US$12.3 billion), the highest in the agency’s 50 year history, and surpassing its target of P500 billion (US$9.9 billion). This year investment pledges came from a total of 426 projects mainly in infrastructure and power that will generate around 76,065 jobs once they are operational. Philippines Trade Undersecretary and BOI managing head Ceferino Rodolfo said that the increase in infrastructure projects this year has supported the BOI’s focus on growth in economic activities outside Metro Manila as well as the massive infrastructure program of the administration.

Laos continues to attract Vietnamese investors despite slow progress in trade ties
(18 December 2017) Despite a slowdown in outbound investment, Vietnamese investors see Laos as an attractive destination and will continue to invest in the country. However, Laos Prime Minister, Thongloun Sisoulith urged the Laos-Việt Nam Co-operation Committees to make greater efforts, considering that bilateral economics and trade ties have remained stagnant and failing to meet the expectations of their leaders.

Vietnam businesses need to adapt to increasing competition
(20 December 2017) Prime Minister of Vietnam, Nguyen Xuan Phuc urged ministries, sectors and localities to comprehensively implement the international integration action plan in parallel with the reform process. Speaking at the Vietnam International Economic forum, Prime Minister Phuc highlighted that Vietnam’s trade surplus exceeded US$3 billion for the first time and noted that its import-export turnover in 2017 is likely to reach US$420 billion. Prime Minister Phuc underlined the important role played by businesses and called for more efforts from businesses to study Free Trade Agreements thus building their own business plans and overcoming challenges. He also urged small and medium-sized enterprises to foster linkages through associations to protect their legitimate rights in a climate of increasing competition and new international trade barriers.

Bidding to begin for Singapore-Malaysia high-speed rail
(20 December) Bidding for high-speed railway project connecting Singapore and Kuala Lumpur is shaping up to be an intense battle between Chinese and Japanese contractors. The tender, open to both domestic and international players, seeks an “assets company” to handle everything from planning, execution, to maintenance and operation of the project. Authorities said that the proposals will be evaluated openly with fair and transparent procurement process. This will be Southeast Asia’s first cross-border high-speed line, and the entire project is expected to cost around 60 billion ringgit ($14.7 billion).

Industry group sees huge potential in Indonesian gaming industry
(18 December 2017) The gaming and animation industry has the potential to boost the Indonesian economy as it is one of the largest markets in the world. Indonesia earned US$879.7 million in revenues from the industry this year with about 43.7 million active gamers. Ardian Elkana, Chairman of Indonesian Animation and Creative Industry Association (AINIKI) said that the gaming and animation industry was a cost-efficient business. To boost profits, he advised the gaming industry to collaborate with other businesses such as publishers of comics and merchandisers.

Vietnam urges firms to proactively seek out more FDI
(18 December 2017) Vietnam Foreign Investment Agency (FIA) held a Workshop titled, Supporting Industry Development – Strengthening Linkages Between FDI and Domestic Enterprises to commemorate 30 years of incoming foreign investment. According to data from the FIA, Vietnam’s foreign direct investment hit US$33 billion in 2017. Professor Nguyen Mai, President of the Vietnam Association of Foreign Investment Enterprises said that Vietnamese firms should improve technology and the quality of human resources to move up the global value chain and to strengthen linkages Vietnamese firms need to proactively reach out for FDI.