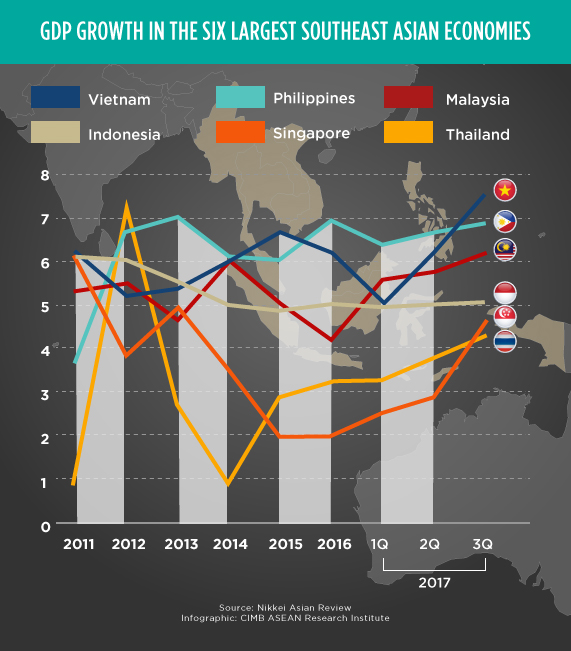 Singapore GDP up a surprising 8.8 percent in Q3
(23 November 2017) Buoyed by a strengthening manufacturing activity, Singapore’s economy grew much faster in the third quarter than initial estimates. The Singaporean Ministry of Trade and Industry said in a statement that on an annualised and seasonally adjusted basis, the economy has grown 8.8% in July-September from the previous quarter. The ministry has included 2-3 percent gains from its previous projection and upgrading this year’s growth forecast from 3 to 3.5 percent. Additionally, the ministry expects growth in 2018 to be around 1.5- 3.5 percent.

Economist predicts Malaysia’s economy to rise 5.3% in 2018
(22 November 2017) Strong investment recovery and more trade volume will benefit Malaysia’s economy next year. With the gross domestic product (GDP) expected to grow 5.3% in 2018. Senior economist at Maybank Kim Eng Research Pte Ltd Senior Economist Chua Hak Bin said that the growth in trade volume and investment recovery would expect to benefit the Ringgit which should strengthen to 4.02 against the US dollar by the end of next year. A stronger Ringgit will also reduce imported inflation as it helps to strengthen purchasing power.

Thai GDP beats forecasts give a strong growth outlook for next year
(20 November 2017) Thailand’s economy is finally catching up with the economic boom in Southeast Asia. To support growth, the government of Thailand is ramping up spending on infrastructure projects. With a US$46 billion infrastructure plan in the works, Porametee Vimolsiri Secretary General of the statistic agency, or National Economic and Social Development said that economic growth in 2018 will surpass that of 2017.

Sustaining strong growth in Cambodia
(22 November 2017) Despite lingering concerns about political stability and the slowing growth in both construction and garment sectors, Cambodia’s economy is forecast to sustain strong growth. The World Bank stated in its Cambodia Economic Update that the increase in export diversification of footwear, electrical machinery and auto parts alongside with healthy inflows of foreign direct investment will ensure the country’s robust GDP growth.

Vietnam will miss this year’s state enterprise divestment target
(22 November 2017) The auction by Vietnam’s State Capital Investment Corporation (SCIC), of shares in five large “blue chip” companies listed on local bourses will be held in December 2017. SCIC is a sovereign government fund which manages the majority of the shares with a clear timetable for divestment in an effort to improve transparency. SCIC listed more than 90 companies for partial or total divestment in 2017. According to a report from Saigon Securities Research (SSR), the local consulting company for divestments, shares in only 20 enterprises had been sold by October.

New air service agreement signed between South Korea and Philippines
(22 November 2017) According to South Korea’s Ministry of Land, Infrastructure, and Transport South Korea and the Philippines have signed a new air services agreement which allows carriers from the two countries to operate an unlimited number of flights out of all Philippine airports except for Manila. Philippine Airline is the largest operator in terms of seat capacity followed by Asian Airlines and Korean Air.

Vietnam’s leader urges US to rejoin trade deal on TPP
(23 November 2017) Prime Minister Nguyen Xuan Phuc urged President Donald Trump, under his “America first” policy to rejoin the framework in order to secure other member states’ as well as its own interest. He added that the successful TPP negotiations are an outcome of Vietnam’s and Japan’s dedication as they are co-host countries. Without Washington’s participation in the Trans-Pacific Partnership (TPP) agreement, the 11 countries, which include Vietnam, Japan, Malaysia and Singapore, have reached a broad agreement on pursuing the trade pact.

Malaysia, Indonesia to jointly counter EU discrimination against palm oil
(23 November 2017) Malaysia and Indonesia are considering taking joint action in countering possible European Union restrictions on the palm oil import. Both countries raised the issue of import restrictions with EU President Donald Tusk in Manila in mid-November. Both countries account for about 82 percent of global palm oil output. The two countries argue that they have taken steps to promote sustainability practice in the industry. An estimated 17 million Indonesians rely directly and indirectly on the palm oil industry. EU is a major buyer of palm oil products accounting for approximately 17 percent and 13 percent of Indonesia and Malaysia’s exports.

Vietnam aims to grow its agriculture sector by 3% in 2018
(23 November 2017) Following an agricultural restructure plan approved by Prime Minister Nguyen Xuan Phuc, Vietnam targets to grow the sector by 3 percent. The restructure plan will classify agriculture products into three main groups including the group of key national products, the group of key provincial products and the group of local specialities. In addition to that, the plan is expected to expand average labour productivity by 3.5 percent per year.