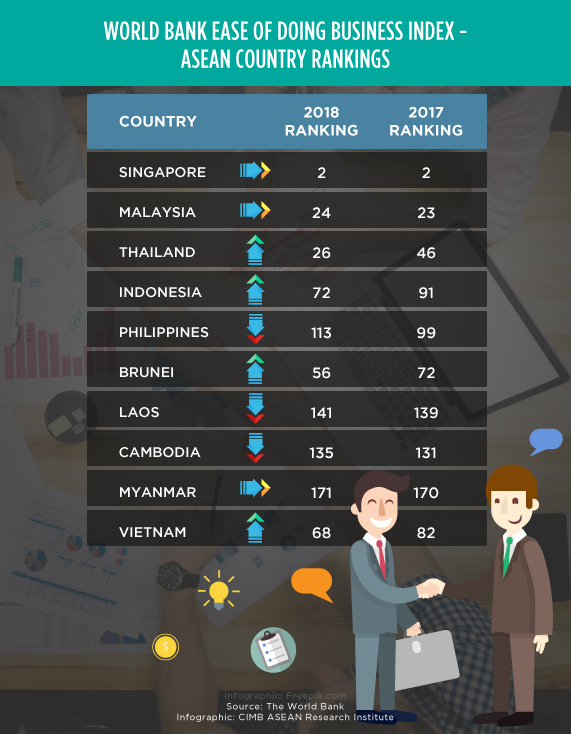 Indonesia moves up 19 places in World Bank’s ease of doing business
(1 November 2017) Indonesia has moved up 19 places in the World Bank’s Ease of Doing Business index and is now ranked at 72. The EODB report noted that “getting electricity”, one of the reforms the bank researched, showed significant improvement in Indonesia, reducing the distance to frontier (DTF). While the latest progress is a boost to Indonesia, it remains far from President Joko “Jokowi” Widodo’s goal of reaching a rank of 40 on the index.

Japan pledges US$9 billion in aid to Philippines
(2 November 2017) Japanese Prime Minister Shinzo Abe has pledged to deliver nearly U$9 billion in aid to Philippine President Rodrigo Duterte. The aid is to be used to rebuild battle-damaged areas of Mindanao island and improve infrastructure throughout the country. Both leaders have shared concerns over security issues in the South China Sea as well as the nuclear and missile programs of North Korea and agree that the latter needs to be dealt with urgently.

eBay to work with Malaysian SMEs
(2 November 2017) eBay’s Malaysia Country Head of Trade Wong Mei Inn said in a statement that the global e-commerce platform is keen to tap into the strong Malaysian small and medium entreprises (SMEs) market under the Digital Free Trade Zone (DTFZ) initiative. eBay has 168 million active buyers worldwide buying items from over 1.1 billion listings in its marketplace. Wong said that it can use this to help Malaysian SMEs expand their business opportunities by providing a global shop front accessed by buyers across the world and by offering localised seller support to catalyse the growth of Cross Border Trade sellers.

Indonesia makes efforts to reduce trade deficit with China
(2 November 2017) Indonesia will send 23 officials from its Trade Ministry to China to study the market there as part of a two-week workshop on promoting more Indonesian goods to be exported to China. This is in an attempt to reduce Indonesia’s trade deficit with the country. Data from the Trade Ministry shows that Indonesia posted a trade deficit of US$8.4 billion with China during the period of January to August 2017, slightly better than $9.9 billion deficit recorded in the same period in 2016.

India should engage more with ASEAN
(1 November 2017) Singapore’s Minister for Foreign Affairs Vivian Balakrishnan pushed India to engage more with ASEAN on his recent visit to the South Asian country. He also encouraged India to increase aviation and maritime links with the grouping through Singapore and also to liberalise its aviation sector noting that India’s tourism figures showed it received half the amount of tourists that Singapore did.

Vietnam’s PMI indicates slower growth
(2 November 2017) Manufacturing growth in Vietnam slowed in October amid the slowest rise in output in a year, according to the latest Nikkei Vietnam Manufacturing Purchasing Managers’ Index. Vietnam’s October PMI reading was 51.6, down from 53.3 in September. Andrew Harker, associate director at IHS Markit, the agency that compiles the survey, said, “The Vietnamese manufacturing sector paused for breath in October, with output rising only marginally during the month. There was further evidence of material shortages impacting on the sector, leading to higher input costs and delivery delays.”

Malaysia to offer unemployment insurance starting in 2018
(2 November 2017) The Malaysian government plans to introduce unemployment benefits including allowances and support for training. The program was voted into law at the end of October and may start in 2018. Employers and workers will each pay in 0.2% of the worker’s wages, for a total of 0.4%. Out-of-work people will be eligible to receive an allowance of 30-80% of their monthly pay. The Malaysian Employers Federation say combined costs of labour and management would add up to 10 times the sum needed for a year of unemployment allowance and that the content of the law differs from what was negotiated with the government.

Thailand surges in ranking for Ease of Doing Business
(1 November 2017) Thailand has moved up 20 places in the World Bank’s Ease of Doing Business index to 26th place – the largest jump among its ASEAN peers. It stands third in ASEAN in terms of Ease of Doing Business, behind Singapore, which remains second, and Malaysia, which moved down one notch overall to 24th globally. Areas improved upon include the time taken to start a business which used to take 27.5 days but with regulatory reforms now takes only 4.5 days.

Indonesia in an all out effort to raise finances for infrastructure
(2 November 2017) The Indonesian government is seeking all avenues to raise funds to finance power plants, toll roads and airports. This is being done in an effort to give President Joko Widodo’s ambitious infrastructure program a boost. Indonesia has planned 247 projects worth some 4,800 trillion rupiah (US$355 billion) to be developed between 2015 and 2019, but the government is only able to finance around 40% of those. With just two years left in this term, Jokowi and his government are under pressure to deliver while also needing to strengthen fiscal discipline meaning an increase in public expenditure is unlikely.

Laos launches ‘Visit Laos Year 2018’
(30 October 2017) Laos officially launched its ‘Visit Laos Year 2018’ campaign with an aim to promote tourism and preserve unique and fine traditional culture of the country. During the launch, Lao Minister of Information, Culture and Tourism Bosengkham Vongdara said, “Over the past years, the government of Laos has come to regard tourism as a priority sector for driving the socio-economic development of the country”, In 2000, tourist arrivals reached 737,208 people and generated an income of nearly US$113.9 million. By 2015, the figure had risen to nearly 4.7 million people, generating nearly US$725.4 million in revenue.