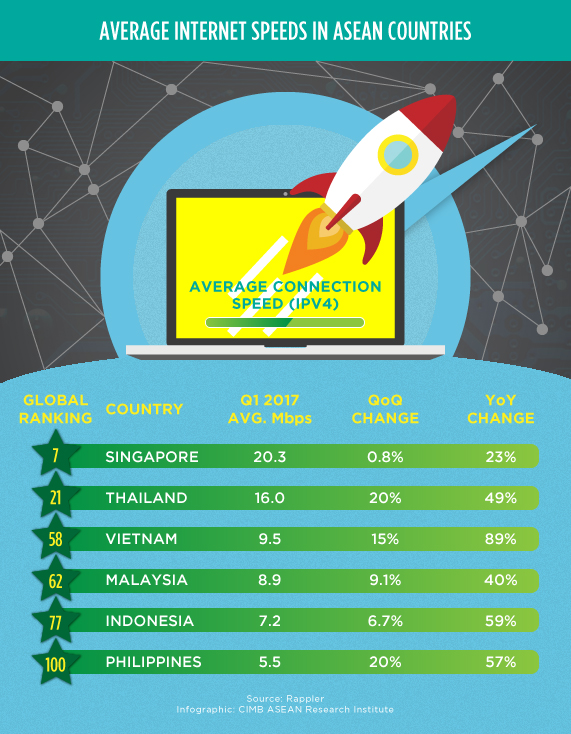 Jack Ma keen to improve internet speeds in Philippines
(26 October 2017) Filipino President Duterte and Chairman of Alibaba Jack Ma met to discuss bringing in platforms to boost the mobile technology, internet banking and the e-commerce industry in the Philippines. During the meeting, Duterte underscored the importance of technology in helping develop the economy. Ma also discussed how his firm’s third party mobile and online payment, Ali-pay, can be expanded in the Philippines.

Malaysia one of the most innovative islamic finance markets
(26 October 2017) According to Fitch Ratings, Malaysia is the most standardised market and one of the most innovative in the Islamic finance community. In order to improve and move to the next stage of development Fitch said that the Malaysian Islamic finance industry should ensure standards in regulatory and legal areas, which aim to describe rights and obligations under all circumstances which would support consistency and strengthen supervision. Fitch said new sukuk issuance with a maturity of more than 18 months from the Gulf Cooperation Council (GCC) region, Malaysia, Indonesia, Turkey and Pakistan totalled US$49.6 billion in the first nine months of 2017.

Indonesian Parliament approves 2018 budget
(25 October 2017) Indonesia’s parliament approved the government’s 2018 budget. The budget sets its target for fiscal deficit at 2.19% of Gross Domestic Product (GDP) which is lower than the official target 2.92% of GDP in the revised 2017 budget. The government is aiming for 2,220.7 trillion rupiah (US$162 billion) in spending next year and expects revenue of 1,894.7 trillion rupiah (US$140 billion), based on an assumption of GDP growing 5.4%.

Singapore to ban additional cars
(23 October 2017) Singapore will be banning additional cars on its roads beginning February 2018 to curb congestion in the city-state. Singapore’s Land Transport Authority announced it would cut its permitted vehicle growth rate from 0.25% per year to 0% in 2018. This decision will be reviewed in 2020. The Government will focus on improving current public transport as well as building new public transport infrastructure.

Vietnam’s capital markets to attract more investors
(26 October 2017) Vietnam’s Deputy Prime Minister Truong Hoa Binh said that conditions in Vietnam were ripe to attract more investors. He attributed this to the country’s steady economic growth, political stability, youthful population, and equitisation of state-owned enterprises all of which he said made the securities markets more attractive for investors. He added that, the Government attaches importance to developing the capital market so that it fulfils its important role of mobilising medium- and long-term funds for the economy.

Tourism a driver for communities and country
(25 October 2017) Lao Minister of Information, Culture and Tourism Prof. Dr Bosengkham Vongdara said that for communities and the country to benefit from tourism the government will need to invest in developing basic infrastructure to improve links with the rest of the region. Prof. Dr Bosengkham said in terms of transportation that the government has allocated a substantial budget to improve airports, road access and other related facilities to attract more visitors. The government is targeting at least 5 million foreign visitors next year, an increase from the 4.8 million tourists expected in 2017.

Singapore focuses on pushing forward anti-terrorist efforts
(25 October 2017) Singapore has assumed the chairmanship of the ASEAN Defence Ministers’ Meeting with a focus on three areas including pushing regional efforts to combat emerging threats from violent extremism. The city-state has vowed to also address the growing collective capability of ASEAN countries to deal with chemical, nuclear and radiation attacks in the region. Singaporean Minister for Defence Ng Eng Hen said, “On top of everybody’s mind was terrorism, and for good reason. Marawi was a wake-up call to all ASEAN countries and a grim warning that the devastation that we see in Iraq and Syria can very well happen in ASEAN countries”.