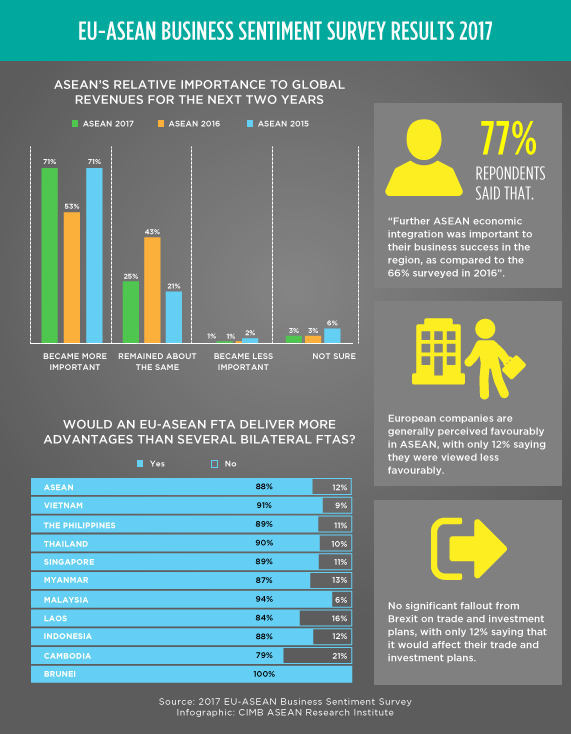 EU-ASEAN business survey shows Brunei top in the region for administrative business costs
(11 October 2017) The EU-Asean Business Sentiment Survey 2017 ranked Brunei Darussalam as the best in ASEAN for administrative costs for business and second best in categories of ease of importing goods, stable government and political system and regulatory regime. The survey carried out on an annual basis, aims to serve as a barometer for the business sentiment and outlook of European businesses in Southeast Asia.

IMF maintains Philippines growth rate at 6.6%
(11 October 2017) The International Monetary Fund (IMF) has retained the Philippines’ economic growth target at 6.6 percent for 2017. IMF representative in the Philippines Yongzheng Yang said, “We see continued robust domestic demand driven by investment and consumption, and fiscal policy is supportive of growth. Hence no change to our forecast”. However, the IMF has revised down the growth forecast for 2018 to 6.7 from 6.8 percent. The Philippines remains the region’s fastest growing economy.

Economic prospects of ASEAN-5 looking up
(11 October 2017) The Japan Center for Economic Research and Nikkei conducted a quarterly consensus survey of economists and analysts in Indonesia, Malaysia, the Philippines, Singapore, and Thailand as well as India. The survey indicated that economists have revised their 2017 growth forecasts upward for these major ASEAN countries, reflecting stronger-than-expected exports and the spillover effects on domestic economies. It was also noted that U.S. President Trump’s policies are becoming less pressing with economists acknowledging a more diverse array of risks within the region.

Conglomerate pitches monorail for Metro Manila
(5 October 2017) Many of Indonesia’s leading e-commerce startups have had to partially suspend e-wallet (11 October 2017) Philippine conglomerate Alliance Global Group announced its interest in building a monorail to link a township project to one of Metro Manila’s busiest train lines. The conglomerate said that once approved, it can complete the project in three. The monorail will be able to ferry up to 100,000 passengers and reduce travel time to five minutes. Alliance Group is not the first to have proposed major infrastructure projects, Ayala Corp., SM Investments and Metro Pacific Investments have all submitted their proposals to build expressways. President Rodrigo Duterte has pledged to spend up to 8.4 trillion pesos (US$163 million) on infrastructure, during his term.

Remittances of ASEAN migrants equivalent to Myanmar GDP
(9 October 2017) According to a recently released World Bank report, in 2015 Southeast Asian migrants sent around US$62 billion worth of remittances to their home countries. That amount is almost the same as the gross domestic product of Myanmar. Remittances make up 10% of GDP in the Philippines, 7% in Vietnam, 5% in Myanmar and 3% in Cambodia. Most of the migrants from the Philippines and Vietnam work outside of the ASEAN region. Approximately 96% of all Southeast Asian migrants within the region are concentrated in Malaysia, Singapore, and Thailand.

Philippines to create new bank to serve Filipinos overseas
(9 October 2017) President Rodrigo Duterte has ordered the creation of a bank mandated to serve the financial needs of Filipinos working overseas. In his order, he said that “There is a need to establish a policy bank dedicated to providing financial products and services tailored to the requirement of overseas Filipinos, and focused on delivering quality and efficient foreign remittance services”. This was one of his campaign promises. There are around 10.24 million Filipinos working overseas. The executive order authorises state-owned Land Bank of the Philippines (Landbank) to acquire Philippine Postal Savings Bank, a state bank created to promote rural economic development, and to relaunch it as the Overseas Filipino Bank.

Indonesian Finance Minister says mine deal to be resolved before 2018
(12 October 2017) Indonesian Finance Minister Sri Mulyani Indrawati said the country’s aim to buy a controlling stake in the world’s second-largest copper mine would be achieved before 2018. U.S.-based Freeport-McMoRan agreed to sell a 51 percent stake in its Grasberg mine in Indonesia in exchange for licenses to operate the massive copper and gold pit until 2041. On a separate matter, Sri Mulyani said that there were no current discussions on Indonesia rejoining OPEC which it left in 2016.

Alibaba to set up R&D facility in Singapore
(12 October 2017) Alibaba Group will be setting up a cutting-edge research and development (R&D) centre in Singapore, with other centres based in China, U.S., Israel and Russia. This will bring Alibaba’s R&D investment up to US$15 billion over the next three years. It’s global R&D programme will add 100 research jobs at Alibaba, which already employs about 25,000 engineers and scientists worldwide. According to Alibaba chief technology officer Jeff Zhang, the goal is to discover new ways of improving efficiency, network security and ecosystems for users and businesses.

Prime Minister Hun Sen renews criticism of the U.S.
(11 October 2017) Cambodian Prime Minister Hun Sen continues his criticism of the United States in the lead up to next year’s elections. Hun Sen’s comments came after the discovery of bombs dropped by the U.S., probably during the Vietnam war, at nine sites in southeastern provinces by Mines Advisory Group. The U.S. has been critical of his handling of opposition leader Kem Sokha’s case. In turn, Hun Sen accused the U.S. of having double standards because while they criticised his handling of Kem Sokha they had shown no respect for human rights in Cambodia when they dropped the bombs.