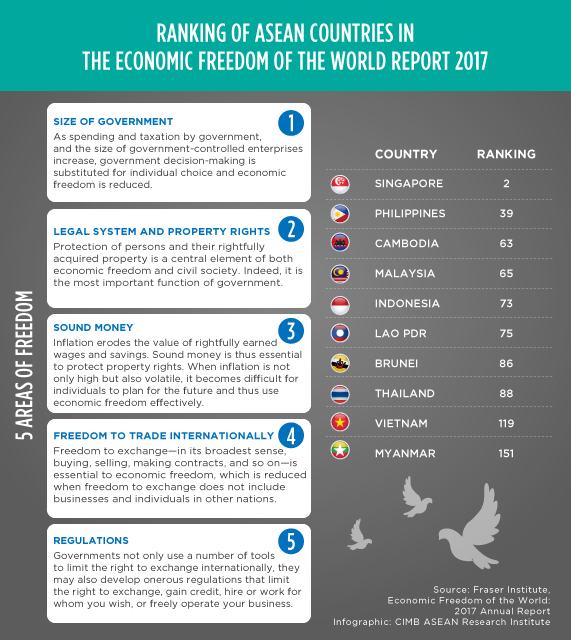 Malaysia moves up in economic freedom rankings
(4 October 2017) Malaysia is now ranked at 65th place out of 159 countries assessed for the Economic Freedom of the World Report 2017. This is a improvement of 7 places compared to its ranking in the 2015 report. The report ranks countries upon the consistency of their institutions and policies in promoting economic freedom and is published by the Fraser Institute in Canada. Regionally, Malaysia was ranked fourth among ASEAN countries after Singapore, the Philippines and Cambodia, followed closely by Indonesia and Laos in the fifth and sixth spot.

World Bank revises Philippines growth citing slow public investment
(5 October 2017) The World Bank has trimmed its growth forecast for the Philippines to 6.6 percent this year and 6.7 percent in 2018 and 2019, pointing to the slow pace of public investment projects which have stalled the growth in spending. In April this year the institution estimated the economic growth outlook for the Philippines to be at 6.9 percent before downgrading it to 6.8 percent in July. The World Bank urges countries in the region to continue pursuing structural reforms that can yield long-term economic benefits. For the Philippines, this means addressing multiple sources of income inequality as well as implementing reforms that strengthen competitiveness and productivity.

World Bank revises up Malaysia growth figures
(5 October 2017) The World Bank has revised up the growth rate of Malaysia’s gross domestic product (GDP) up to 5.2% from 4.9% which exceeds the rate that the central bank has set. However, the Bank warned that the rising cost of living due to fiscal consolidation efforts and the high level of household debt could dampen private consumption. The report warns that the country’s budget deficit is an area of concern as it narrows the government’s policy space for responding to shocks in the economy.

Indonesia’s central bank suspends unlicensed e-wallets
(5 October 2017) Many of Indonesia’s leading e-commerce startups have had to partially suspend e-wallet operations until they are granted a license by the central bank. The growing popularity of the electronic services has attracted greater regulatory scrutiny. Only a tiny fraction of transactions use e-money at present, but the system has seen double-digit growth in the last few years. According to Bank Indonesia by August 2017 e-money transactions had reached US$490.4 million — 94% of 2016’s figure. Those who have suspended their e-wallet services include Tokopedia, Shopee, and the popular local platform, Bukalapak.

Political uncertainty causing firms to move abroad
(5 October 2017) The World Bank’s latest Thailand Economic Monitor noted that political uncertainty over planned reforms and public infrastructure projects are perceived as the top concerns for investors considering doing business in the country. The report highlighted that in August 2017, “private investment as a share of GDP declined to a five-year low of 17.8% of GDP from already low levels”. Thai companies are spending less at home, they are shifting to invest in opportunities elsewhere in the region to take advantage of cheaper labour and technology in other countries.

Singapore and Thailand in potential e-payment alliance
(5 October 2017) Singapore and Thailand have begun discussions about connecting their national digital payment systems to forge an unprecedented regional alliance, as officials step up efforts to curb the use of cash. The link would bring together Southeast Asia’s first national digital-payment platforms, Singapore’s PayNow and Thailand’s PromptPay, said Naphongthawat Phothikit, director of payment systems policy at the Bank of Thailand. He added that discussions are at a preliminary stage, and it is too early to talk about details or a time-line.

Cambodia seeks GSP status for its products
(5 October 2017) Representatives from Cambodian trade unions and employers associations will put forward a request to the European Union and the United States to extend the Generalised System of Preferences for a number of Cambodian products. A joint statement was released after a closed-door meeting of the Labour Advisory Committee on Minimum Wage for 2018. President of the Cambodia Labor Union Federation Som Aun said that since the minimum wage has been revised upwards several times in the last 10 years, there is now a need to make Cambodian products more competitive by increasing preferential treatment.

Automotive sales up by 3 percent in Southeast Asia
(2 October 2017) Sales of new automobiles in six major Southeast Asian markets rose 3% on the year to 285,375 units in August 2017. This was the highest level in five months, driven by solid growth in the Philippines and Thailand. Sales in the Philippines surged by 18% to 39,404 units amid a rush to buy before excise taxes go up next year. In Thailand sales climbed 7%. If the current pace is maintained, the full-year tally will exceed 800,000 for the first time in three years.

ASEAN needs to spend US$500 billion to keep up with energy demands
(30 September 2017) According to research done by British energy research and consultancy group Wood Mackenzie, ASEAN needs to more than double its power capacity in less than 20 years to meet the rapidly increasing demand. It is estimated that this would require approximately US$500 billion worth of investment to achieve. The region needs to construct an additional 270 gigawatts (GW) of generating capacity by 2035 with current capacity at 209 GW.

Vietnam prioritises boosting ties with Laos
(4 October 2017) During the Lao Prime Minister’s’ visit, Vietnamese President Tran Dai Quang said that Vietnam supports the national reform, defence and construction of Laos. The Lao leader’s visit aims to further promote and deepen the Vietnam-Laos special solidarity as two countries are celebrating the 55th founding anniversary of diplomatic ties and 40 years of the signing of the Vietnam-Laos Treaty of Amity and Cooperation. President Quang said that as the host of the APEC Year 2017, Vietnam has invited Lao Party General Secretary and President Vorachith to attend the APEC Economic Leaders’ Week in Da Nang in November as a guest along with the leaders of Cambodia and Myanmar.