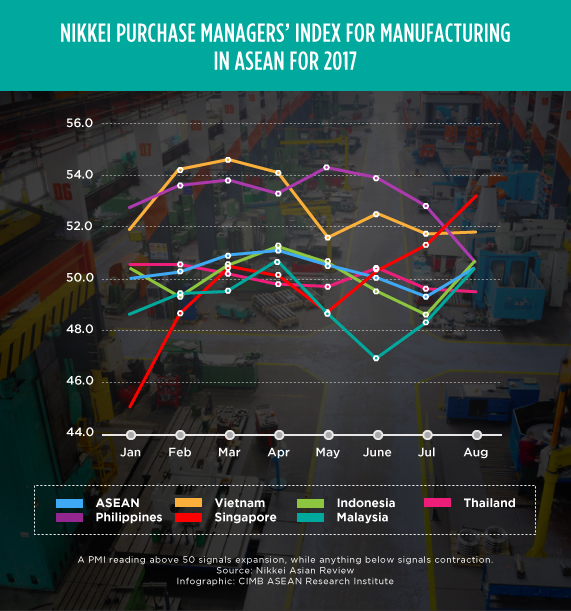 ASEAN Manufacturing Purchasing Managers’ Index at 50.4, signalling expansion
(14 September 2017) The Nikkei ASEAN Manufacturing Purchasing Managers’ Index (PMI) rebounded to 50.4 in August from 49.3 in the previous month. Vietnam, whose export demand expanded for the 21st straight month, led the pack with a reading of 51.8 for August. Chua Hak Bin, senior economist at Maybank Kim Eng, believes the current manufacturing recovery, led by electronics, has the momentum to last through early 2018. A PMI reading above 50 signals expansion, while anything below signals contraction.

Thailand’s sovereign bonds challenges conventional wisdom
(12 September 2017) Thai bonds have become a favoured low-yielding destination for bond investors. Foreign investors have pumped a net $2.6 billion into Thai notes so far this month, more than for South Korea, India and Indonesia combined. While Indian and Indonesian debt have attracted more foreign money this year, the two countries offer 10-year yields almost triple that of Thailand. The Thai bonds yield slightly less than those from South Korea, which has a credit rating five levels higher at Moody’s. Moody’s rates the Thai bonds at three levels above junk.

Increasing calls for construction of the Thai Canal
(11 September 2017) Rolf-Dieter Daniel, president of the European Association for Business and Commerce, has joined the growing group of supporters calling for the construction of the Kra Canal (also known as the Thai Canal), a US$28 billion ship canal that will link the Indian and Pacific Oceans. The canal would bypass the Strait of Malacca, and is estimated to reduce at least 1,200km of travelling for ships passing between the Indian and Pacific Oceans, or up to three days’ sailing time. Supporters are hoping that the 135km long canal can be funded through China’s multibillion-dollar Belt and Road Initiative and 21st Century Maritime Silk Road.

The KL-Singapore High-Speed Rail is expected to provide GDP uplift to both countries
(12 September 2017) The Kuala Lumpur-Singapore High-Speed Rail (HSR) is expected to contribute US$4.99 billion in gross domestic product (GDP) to Malaysia and Singapore, as well as create 111,000 jobs by 2060, according to Malaysia’s Land Public Transport Commission (SPAD) Chief Executive Officer Mohd Azharuddin Mat Sah. Mohd Azharuddin added that Malaysia and Singapore were expected to sign a bilateral agreement for the Johor Bahru-Woodlands Rapid Transit System Link project this December, to provide relief to the perpetually-congested Causeway – one of the world’s busiest land checkpoints.

Japan to invest in Indonesia rail project
(7 September 2017) Indonesia has agreed to a Japanese overhaul of existing railways connecting Jakarta, the capital city, and Surabaya, the nation’s second-biggest metropolis. The project is estimated to reduce travelling time from 11 hours to five or six hours. The project has been long delayed as previously the two sides were at odds over how to proceed with the development.

RCEP likely to miss 2017 deadline
(11 September 2017) Countries negotiating the Regional Comprehensive Economic Partnership (RCEP) trade agreement have struggled to agree on the percentage of goods to come under free-trade agreement, and are likely to miss the 2017 deadline. Philippine Secretary of Trade and Industry Ramon Lopez says that the ministers from the 16 RCEP countries are tempering their expectations and focusing on key elements identified instead.

Japan Airlines to start code-sharing with Vietjet
(14 September 2017) Japan Airlines (JAL) will begin code-sharing with Vietnamese budget carrier Vietjet Air as early as the current fiscal year ending in March. JAL President Yoshiharu Ueki says that code-sharing is crucial as running everything independently grows increasingly difficult. Through code-sharing – an arrangement where airlines share the same flights – JAL can extend its reach into the Vietnamese market and capture growing demand from business travelers and tourists. Visa requirements for Vietnamese nationals to Japan has also been relaxed, and a record 230,000 Vietnamese traveled to Japan last year.

Vietnam infrastructure projects delayed again due to capital shortage
(14 September 2017) The Metro Line 2 project in Ho Chi Minh has been delayed again until 2020, leaving it seven years behind schedule. The announcements come a few months after the city’s budget was reduced 5% by the central government in Hanoi, shrinking some $3.57 billion each year through 2020. The cut has raised concerns about financing public projects since the remaining budget only covers about a third of infrastructure investment needs. Vietnam needs to invest in total an estimated $400 billion in infrastructure over the next decade.

Vietnam infrastructure projects delayed again due to capital shortage
(11 September 2017) Cambodian Prime Minister Hun Sen threatened the opposition party with dissolution if it continues to support detained leader Kem Sokha, who has been charged with treason over an alleged plot to gain power with support from the United States. Kem Sokha was arrested on 3 September. His party claims that his arrest was illegal because he should have been protected by his parliamentary immunity.