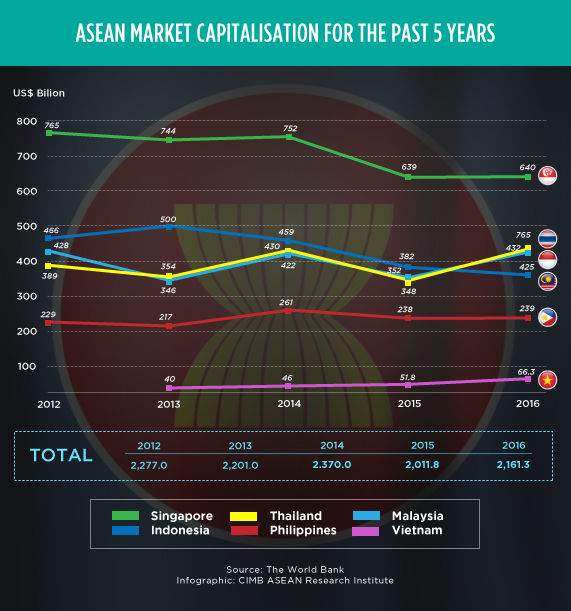 Singapore to face labour challenges amidst aging population
(6 September 2017) According to Louis Kuijs, the Hong Kong-based head of Asia economics at Oxford, Singapore’s labour supply growth is set to shrink by 1.7 percentage points from 2017-2026, and 2.5 percentage points in the following ten years. Increasing immigration restrictions add to the expected drop in working age population growth. A percentage-point decline in labor supply growth would result in a half-point to two-thirds of a percentage point drop in GDP growth.

Myanmar seeks to establish its first precious metal trade center
(5 September 2017) Myanmar is looking to develop its first official market for gold, gems and metal trading in Yangon this year. The trade center was set up to deter smuggling of precious metals, increase tax revenues, and create job opportunities, according to U Khin Maung Han, Chairman of the Myanmar Federation of Mining Association. The official gold market has been in the works for three years, and various ministries and agencies involved in the creation.

Malaysia’s July Export Grow 30.9% due to electronics demand from China
(6 September 2017) Malaysian exports in July totalled US$18.51 billion compared with US$14.26 billion in the same month last year, according to data released by the Malaysian Department of Statistics. Exports to Malaysia’s largest trading partner China increased 28.8% year-on-year in July. Affin Hwang Investment’s Economist Alan Tan notes that Malaysia’s export performance will be supported by the global demand for the electronics segment, particularly semiconductors.

Singapore takes biggest share of ASEAN foreign investment
(6 September 2017) From 2012 to 2016, Singapore received 81% of U.S. investment, and 85% of European Union investments into the ASEAN region. The main attraction towards Singapore is its economy’s strength and concentrated talent pool. In 2016, Airbus selected Singapore as the destination for its first pilot training center in Southeast Asia.

Japan to invest in Indonesia rail project
(7 September 2017) Indonesia has agreed to a Japanese overhaul of existing railways connecting Jakarta, the capital city, and Surabaya, the nation’s second-biggest metropolis. The project is estimated to reduce travelling time from 11 hours to five or six hours. The project has been long delayed as previously the two sides were at odds over how to proceed with the development.

Energy companies in Thailand anticipating the national power blueprint update
(2 September 2017) Energy companies in Thailand are trying to position themselves strategically ahead of the government’s update of the Power Development Plan. The current military government is pushing for diversification of energy sources to reduce over-reliance of domestically produced natural gas. Thailand formulates a Power Development Plan once every few years, with the latest plan dated 2015.

Vietnam, Myanmar, Thailand and cohorts build infrastructure, lower barriers
(7 September 2017) Countries around the Mekong River region are looking to improve transnational distribution networks through bridges and roads as well as abolishing intraregional tariffs. The Southern Economic Corridor is seen as the focal point for development as it links major cities such as Vietnam’s Ho Chi Minh City and Thailand’s Bangkok. The five countries of the Mekong region – Cambodia, Laos, Myanmar, Vietnam and Thailand – doubled their nominal gross product from 2007 – 2016.

India and Myanmar to increase cooperation
(7 September 2017) India and Myanmar have agreed to increase partnership in maritime security, having signed 11 memorandums of understanding (MoU) in areas including coastal surveillance. Indian Prime Minister Narendra Modi welcomed progress on infrastructure linking the two countries, singling out the finished expansion of the port of Sittwe on Myanmar’s western coast and the completion of an inland river terminal at Paletwa. Modi traveled to Myanmar looking to strengthen its links in the region amid China’s widening influence.

Media crackdown in Cambodia raises grave concerns
(4 September 2017) The Cambodia Daily, an independent Cambodian newspaper, shuts down after 24 years of operations. This comes after a month-long dispute with government on US$6.3 million of back taxes. Up to date, 18 radio stations have been ordered off-the-air in Cambodia. The US Embassy in Phnom Penh released a statement raising questions about the government’s ability to organise credible national elections in 2018.