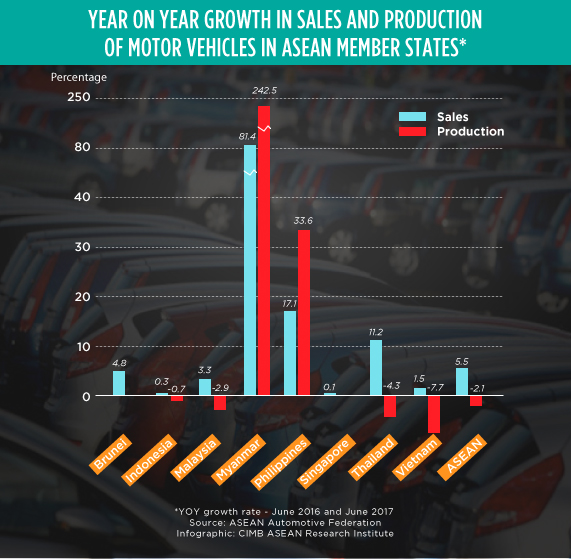 Southeast Asian automobile industry recovering
(1 August 2017) The Southeast Asian automobile industry is recovering after a year long slump with Philippines and Thailand leading the way. The sales in six major Southeast Asian countries grew by 5% with 1.62 million new vehicles sold from January to June 2016. Philippines led the sales with a boom in consumer spending while the demand in Thailand increased due to changes in the country’s tax code. Malaysia and Indonesia also had solid growth of between 6-7% in May. This growth is good news for Japanese automakers as their aggregate market share reaches approximately 80% with combined annual sales exceeding 2.5 million.

IMF foresees medium term risk to Asia
(31 July 2017) While ASEAN economies remain a “bright spot” on the world stage, the International Monetary Fund (IMF) warned that medium-term risks may be a cause for concern. According to Deputy Director of Research at the IMF Gian Maria Milesi-Ferretti, foreign investors are currently keen to invest in ASEAN countries, however, this may change due to potential factors that could push global confidence to become less optimistic. These factors include the slowdown in China’s economic growth, the tightening monetary policy in the US and the threat of protectionist policies in major economies. To reduce these risks, Milesi-Ferretti suggested that countries should maintain a flexible exchange rate which acts as a shock absorber for open economies.

Developer says Singapore property market bottoming out
(1 August 2017) Singapore’s biggest developer, CapitaLand Ltd, says that it sees signs that the city’s residential property market is “bottoming out”. According to CapitaLand Ltd’s Chief Executive Officer Lim Ming Yan, extra liquidity was a factor in higher transaction volumes and slower price declines in recent months and that with Singapore’s restrictions and stringent policies further tightening in the market is not likely. According to Singapore’s Urban Redevelopment Authority home sales jumped 72% during the first half from a year earlier as developers sold 6,567 units.

Singapore and Brunei may join Trilateral Maritime Patrol
(26 July 2017) Singapore and Brunei may be added to the Trilateral Maritime Patrol (TMP) which currently includes the Philippines, Malaysia and Indonesia. Malaysia’s Defence Minister Datuk Seri Hishammuddin Hussein said this would be to strengthen the fight against sea piracy, kidnapping, armed robbery and militant threats from the Islamic State (IS) in the Sulu Sea. Hishammuddin also suggested that all ASEAN defence ministers should gather in Manilla to be briefed on the current situation in IS-occupied Marawi.

Myanmar’s natural resources fast disappearing
(3 August 2017) According to the World Wildlife Fund, Myanmar is still among the few countries in the world whose natural resources exceed the requirements of its citizens. However, they also stated that Myanmar has one of the highest deforestation rates in the world and has lost a lot of its mangroves and biodiversity over the last decades. International environment watch group Global Forest Resources’ assessment in 2015 reported that almost 2% of Myanmar’s forest cover has been lost each year, based on 2010 levels. Myanmar has the third-highest annual rate of forest reduction, behind Brazil and Indonesia.

Indonesia and Australia hosted counter terrorism meeting
(29 July 2017) Indonesia and Australia co-hosted a counter terrorism meeting to discuss the rising threat of foreign fighters, as the Philippines battles pro-Islamic State militants. The ministers were set to address the challenges of growing terrorism in Southeast Asia and their concerns over the Islamic State’s attempt to establish a regional caliphate in the Philippines. Indonesia’s Chief Security Minister Wiranto said he is hopeful that both parties can curb terrorism especially in Marawi, Philippines. The meeting was attended by six countries including Malaysia, Philippines and New Zealand.

ASEAN foreign ministers express ‘great concern’ over North Korea
(2 August 2017) According to an initial draft of a joint communiqué for the upcoming ASEAN Foreign Ministers’ Meeting (AMM), officials have expressed their concern over North Korea’s test-fire of an intercontinental ballistic missile (ICBM) last month and its previous nuclear tests and ballistic missile launches. The AMM will push North Korea to comply to the obligations under UN Security Council Resolutions as the developments may disrupt peace and stability. They also emphasised their support for denuclearisation of the region.

Vietnam and Myanmar meet to discuss defence cooperation
(29 July 2017) Vietnam and Myanmar met in Hanoi to discuss how to boost bilateral cooperation on defence under an MoU which was signed in 2011. Deputy Defence Minister of Vietnam Nguyen Chi Vinh and Deputy Head of Myanmar’s security-military general department Than Htut Thein agreed on the need for a defence policy dialogue mechanism at the deputy ministerial level and to enhance ties in training, defence industry and military medicine.

Philippines showing economic growth but unstable politics poses a risk
(1 August 2017) According to London-based economic research firm Capital Economics, Philippines has the potential to grow at a fast pace but political instability poses a threat. The foundation of the country is strong with its healthy demographics, low wages, strong fiscal position and booming business process out of sourcing industry. According to the Japan External Trade Organisation manufacturing wages in the Philippines are lower than salaries in China, Malaysia, Thailand and Indonesia. However, sudden policy changes and controversial comments from Philippines’ President Rodrigo Duterte may risk the country’s bright future.

M.alaysia expected to sign FTAs with Hong Kong, Iran and EU
(31 July 2017) Malaysia is expected to ink several free trade agreements (FTA), according to Second Minister of International Trade and Industry Datuk Seri Ong Ka Chuan. The country’s FTA with Hong Kong and Iran are expected to be signed by year-end while the FTA with the European Union (EU) is currently in progress. However, there have been concerns over the palm oil sector as the EU has adopted discriminatory policies towards palm oil. In 2016, EU was Malaysia’s biggest palm oil market with exports worth approximately US$2 billion. The FTA between Malaysia and 27 countries in the EU is expected to boost total trade by 20-30% from the current 10%.

FDI of India and ASEAN-5 are expected to boost in next decade
(2 August 2017) India and ASEAN-5, consisting of Indonesia, Malaysia, Thailand, Philippines and Vietnam, can expect a surge in their foreign direct investment (FDI) in the next decade. According to a report by Japanese financial services company Nomura, the countries are likely to see an increase in FDI from US$100 billion in 2015 to US$240 billion in 2025. The six countries are expected to surpass countries like China, South Korea and Singapore in “attractiveness” as they have large and growing domestic markets, infrastructure improvements, better investment conditions, sound economic management, political stability and readily available low-cost labour.