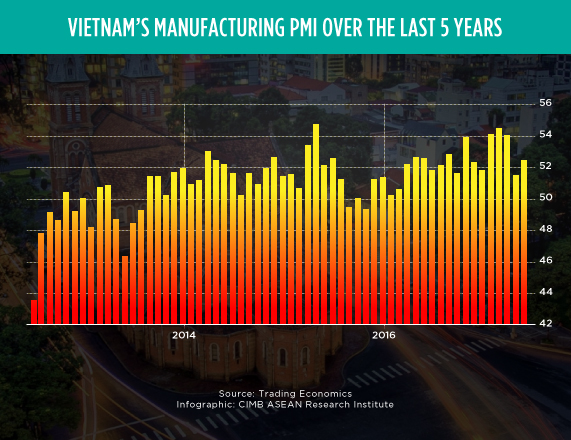 Southeast Asian banks must embrace FinTech to grow
(26 July 2017) According to a survey on the situation on ASEAN investment by the Economic Research Institute for ASEAN and East Asia (ERIA), ASEAN countries see their peer, Vietnam, as a “regional special investment destination”. In turn, Vietnam has allowed many ASEAN investors into various sectors especially industrial manufacturing and processing sectors, according to ERIA senior policy researcher Rebecca Fatima Sta Maria. Vietnam’s Deputy Minister of Foreign Affairs Nguyen Quoc Dung said the total registered capital into Vietnam so far is US$64 billion as countries look to make Vietnam a destination for manufacturing and processing projects.

ASEAN lags behind global average in tax revenues
(21 July 2017) Southeast Asian countries like Indonesia and Malaysia have fallen behind the global average in terms of tax revenues collected as a proportion of gross domestic product. The Organisation for Economic Cooperation and Development (OECD) claimed that Indonesia, Singapore, Malaysia and the Philippines recorded tax-to-GDP ratios of 11.8%, 13.6% 15.3% and 17.0% in 2015. This presents a significant problem for Southeast Asian countries that need to mobilise revenues to finance public services. The OECD noted several factors for the low figures including the challenges of taxing the agricultural sector, lack of compliance from citizens to pay taxes and a reduction in tax rates.

Singapore and Brunei may join Trilateral Maritime Patrol
(26 July 2017) Singapore and Brunei may be added to the Trilateral Maritime Patrol (TMP) which currently includes the Philippines, Malaysia and Indonesia. Malaysia’s Defence Minister Datuk Seri Hishammuddin Hussein said this would be to strengthen the fight against sea piracy, kidnapping, armed robbery and militant threats from the Islamic State (IS) in the Sulu Sea. Hishammuddin also suggested that all ASEAN defence ministers should gather in Manilla to be briefed on the current situation in IS-occupied Marawi.

Malaysian capital market grew 9% to RM3.1 trillion in 2017
(25 July 2017) The Malaysian capital market expanded by 9% to RM3.1 trillion (US$0.72 trillion) in the first six months of 2017, ranking fifth in Asia based on gross domestic product (GDP). According to Malaysian Prime Minister Datuk Seri Najib Abdul Razak, foreign companies from China, Saudi Arabia and England have pledged investments in Malaysia, an acknowledgement of Malaysia’s status as an international financial and business center.

Philippines suggests cooperation with Beijing on oil exploration
(26 July 2017) The Philippines has promised to consult its ASEAN peers on anything related to its proposal to Beijing for joint oil exploration in the South China Sea. The proposal goes against President Rodrigo Duterte’s predecessor Beningo Aguino’s stance who opposed China’s claims over the entire sea through legal and diplomatic platforms. This policy reversal alarmed other ASEAN countries which hold partial claim to the disputed area.

Indonesia only ASEAN nation yet to completely ban cigarette advertising
(25 July 2017) All ASEAN countries except Indonesia have banned cigarette advertisements across all media platforms. According to Southeast Asia Tobacco Control Alliance (SEATCA) executive Director Bungon Rittiphakdee, aside from banning the advertisements, measures such as increasing tobacco tax, adding warning labels and controlling cigarette sales were implemented to avoid negative health impact. However, In Indonesia, cigarette related advertising continues. Rittiphakdee added that tobacco kills at least half a million of people per year in Southeast Asia.

(25 July 2017) Chinese Foreign Minister Wang Yi urged ASEAN countries to reject ‘non-regional forces’ as they seek to jeopardise stability in the region. Speaking at a news conference in Manila, Wang said that the China-Philippines relationship plays a key part in achieving stability as criticisms on Beijing’s expansionism, land reclamation and militarisation has lessened since Filipino President Rodrigo Duterte took office last year. He added that the progress on the Code of Conduct for the disputed area shows that Beijing and ASEAN are capable of putting aside their differences to cooperate.