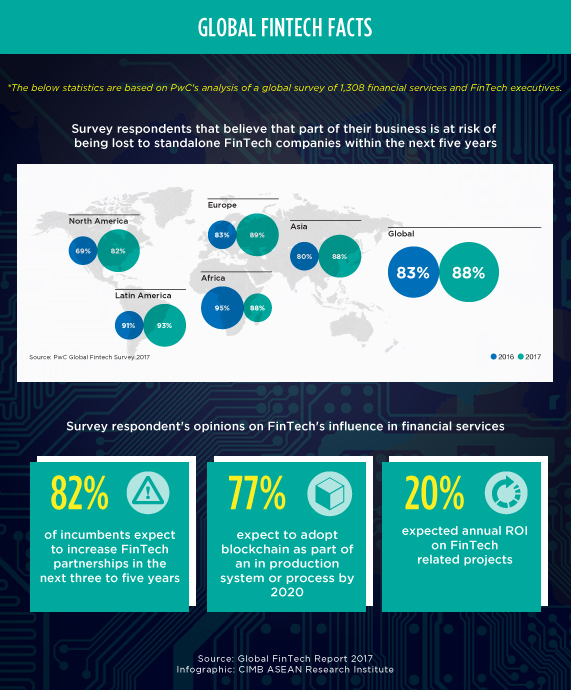 Southeast Asian banks must embrace FinTech to grow
(20 July 2017) Southeast Asia’s Banks must embrace the digital revolution to cater to the rising middle-class population. Pipit Aneaknithi, President of Kasikron Bank said that ASEAN is at a transition period and that there is a need to provide new and better services for the new generation which has a larger capacity for consumption. With current technology, banks can create low cost business models for consumers and provides business opportunities. Major banks such as Bangkok Bank and Kasikorn Bank are adopting fintech by providing capital funds to support startups in the sector.

Malaysia, Thailand and Indonesia consider reducing rubber exports by 10% to 15%
(17 July 2017) Malaysia, Thailand and Indonesia are considering reducing exports by 10% to 15% to curb falling prices, according to Malaysia’s Plantation Industries and Commodities Minister Mah Siew Keong. The price of rubber has plummeted since January mainly due to the declining demand for the commodity especially from China which is the world’s largest rubber consumer. The International Tripartite Rubber Council (ITRC) consisting of Malaysia, Indonesia and Thailand will meet on September 15 to discuss ways to stabilise prices.

Singapore offers Philippines training and facilities to combat terrorism in Marawi
(19 July 2017) Singapore has offered military assistance to the Philippines by providing humanitarian efforts, urban training facilities and training for troops in an effort to counter terrorism attacks from the Islamic State (IS) at Marawi. Singapore’s Defence Minister Ng Eng Hen offered help to to Philippine Secretary of National Defence Delfin Lorenza in the areas of army intelligence, surveillance and reconnaissance capabilities. Ng stressed that the terrorism threat has serious repercussions and combatting it is a collective effort.

Guangxi and China to open new trade route
(19 July 2017) A link up between Guangxi and Singapore could open up further routes and opportunities for ASEAN. According to Singapore’s Senior Minister of State for Trade and Industry Koh Poh Soon, Guangxi’s strategic location is significant in the Singapore and China’s Chongqing Connectivity Initiative. The International Enterprise of Singapore and the Guangxi regional government also agreed to look at proposed transport gateways to link the south-western city of Chongqing with Singapore via Guangxi. Chairman of Beibu Gulf Port Group Mr Zhou Xiaoxi said the gateway is expected be a major channel for electronics, furniture and building materials.

Cambodia-Thailand will speed up tax agreement
(12 July 2017) The Monetary Authority of Singapore (MAS) and the Bank of Thailand (BOT) signed a FinTech Cooperation Agreement (CA) which allows the two parties to share information on market trends and its impact on regulations. The signing of the deal came with the update on the Memorandum of Understanding (MOU) on Banking supervision as agreed upon by the two banks in 2006. MAS Managing Director Ravi Menon said the two banks have been partners in promoting supervisory cooperation and financial integration.

Indonesia and Singapore cooperate in military force
(12 July 2017) Indonesia and Singapore are to cooperate to promote peace, security and stability in ASEAN region to provide a better world order, according to Indonesia’s armed forces (TNI) Chief General Gatot Nurmantyo. The two nations have agreed to have a governing body overseeing meetings between armed forces in the areas of operations, exercises, intelligence, logistics and personnel. Lieutenant General of Singapore Perry Lim expects bilateral relations to further strengthen and remarked that terrorism is a threat that both countries need to tackle together.

Southeast Asia’s ‘tax race to the bottom’ has negative consequences
(14 July 2017) According to International Monetary Fund (IMF), competition between Southeast Asian countries to attract foreign investment has negatively impacted the national revenues. IMF Deputy Managing Director Mitsuhiro Furusawa said the slow global growth and the investment battle by ASEAN nations led to amplified corporate tax competition, cross-border tax avoidance and illegal tax evasion which only benefits the investors rather than the country itself. For example, Indonesia is encouraging many tax exemptions to lure investors and Singapore seems to benefit from its low corporate tax at the expense of its neighbours.

Growth in ASEAN driven by exports recovery
(18 July 2017) Growth in ASEAN’s economies has been driven by a recovery in exports with mixed results in private consumption. Economists at Morgan Stanley Research said that private consumption registered a healthy pace in Malaysia and Philippines, while in Thailand and Singapore it has been ‘less than inspiring’ and in Indonesia it has been stagnant. Malaysia’s private consumption has been resilient and is expected to grow at 6.6% this year and 6.4% in 2018 as export recovery will increase employment and wage growth. Meanwhile, Singapore’s economy improved with an expansion in GDP by 2.5% in the second quarter due to strong global demand from manufacturing activities.

Thailand urges regional trade unity
(14 July 2017) Thai Vice Commerce Minister Winichai Chaemchaeng urged Southeast Asian countries to focus on regional integration over a country’s own interest. Winichai hoped the Regional Comprehensive Economic Partnership (RCEP) will be passed this year. He added that micro, small and medium enterprises should take part in the region’s growth and encouraged Thai businessmen in the Philippines to explore the food and entertainment markets.

Philippines will host ASEAN environment meeting
(16 July 2017) Philippines will host The ASEAN Senior Officials for Environment (ASOEN) meeting meeting between 23 to 29 July 2017. Environment Secretary Roy A. Cimatu said the meeting will place emphasis on climate change and hopes to boost environmental cooperation in Southeast Asia as the issues are important to improve the management of the region’s natural wealth. Some of the highlights of the meeting will be the drafting the ASEAN joint statement on climate change and the 11th ASEAN-Japan Dialogue on Environmental Cooperation.