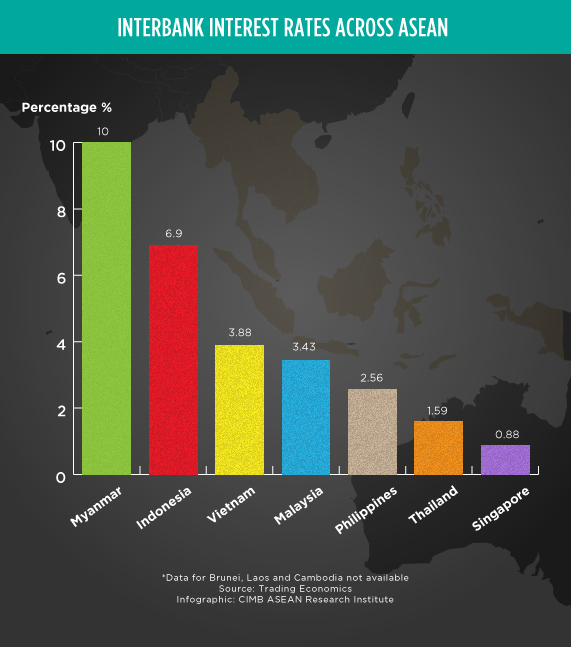 Philippines Central Bank closely monitoring financial risks
(11 July 2017) Philippines Central Bank is closely monitoring financial risks in the country and is ready to act if necessary. According to the new governor Nestor Espenilla, Bangko Sentral ng Pilipinas’ (BSP) has been vigilant in assessing the current economic situation as the government tries to strike a balance between economic growth and overheating of the economy. The Philippines’ GDP grew to 6.4% in the first quarter of 2017 due to an influx of Chinese investments. Meanwhile, the annual inflation rose to 2.8% in June and policymakers maintained key interest rates and reduced their 2017 inflation forecast from 3.4% to 3.1%.

Thai auto industry declining due to lack of technology
(7 July 2017) Thailand’s automotive industry is declining due to lack of technology as compared to countries like Indonesia and Mexico. In 2010, the value of passenger car exports from Thailand only grew 8% while Indonesia’s expanded by 17% which led to Thailand losing its market share in Japan, Saudi Arabia and the Philippines. The automotive industry is becoming more advanced with the increasing use of electronic parts. Thailand, however, lacks the technology needed to produce such parts and can only handle simpler systems.

ASEAN should invest more in renewable energy
(13 July 2017) ASEAN will have to invest 1% of its yearly GDP into renewable energy to reach its target of 23%. According to the Manager of ASEAN Plan of Action for Energy Programme under the ASEAN Center of Energy Christopher Zamora US$7.5 billion per year must be invested in solar PV and US$6.3 billion in hydropower and a total of US$27 billion for all renewable energy. Zamora added that the increased investment in renewable energy is crucial for sustainable growth in ASEAN.

IPO in ASEAN increases
(13 July 2017) Southeast Asia may see more initial public offering (IPO) activity in the second half of the year. UBS investment Bank in Singapore says that the markets have rallied strongly since 2016 and companies are raising capital and take advantage of the market’s liquidity. In the second quarter, the IPOs in the region rose to US$3.1 billion from 33 deals which shows a shows stronger IPO of ASEAN market in both volume and value terms. Deloitte reports show the top three industries based on IPO count in ASEAN between 2014 to 2016 are consumer business, energy and resources and industrial products.

Free Trade Agreement beneficial for SMEs
(13 July 2017) Small and Medium Enterprises (SMEs) can flourish with business opportunities from the free trade agreements (FTAs). It also allows the companies to enter the foreign market with the ASEAN Economic Community and ASEAN’s dialogue partners and India. According to President of Philippines Chamber of Commerce and Industry (PCCI) George Barcelon, the FTAs are good for SMEs but they need the assistance of trade chambers to overcome the obstacles that come with FTAs. He added that Micro Small and Medium Enterprises (MSMEs) have to adapt to the resilient market demand, technological change and other challenges.

Singapore and Thailand central bank inked FinTech
(12 July 2017) The Monetary Authority of Singapore (MAS) and the Bank of Thailand (BOT) signed a FinTech Cooperation Agreement (CA) which allows the two parties to share information on market trends and its impact on regulations. The signing of the deal came with the update on the Memorandum of Understanding (MOU) on Banking supervision as agreed upon by the two banks in 2006. MAS Managing Director Ravi Menon said the two banks have been partners in promoting supervisory cooperation and financial integration.

ASEAN-5 countries show little confidence in their leaders
(13 July 2017) Citizens in the ASEAN region show little confidence in their governments according to the Financial Times’ Confidential Research report on ASEAN Political Indices for the second quarter of 2017. The survey tracked 5000 respondents across the ASEAN-5 countries. The index fell in three out of the five countries surveyed. The Philippines showed signs of optimism but less than last year while Malaysia remains the most pessimistic in the region despite the country’s economy rising 1.5 points to 31.8 points. Thailand’s index fell close to the 50 point mark, sitting on the fence between optimism and pessimism and, indices in both Indonesia and Vietnam dropped due to corruption and governance issues.

Malaysia’s exports soar beyond expectations
(7 July 2017) Malaysia’s exports increased up to 32.5% since last year, according to government data. The growth pace exceeded the expected 21.3% by a Reuters poll and April’s 20.6% growth. Export growth has outpaced imports since May 2016 and imports increased to 30.4% from a year earlier, up from the 24.7% in April. Exports to China also rose rose to 51.5% from a year earlier while shipments to US grew by 16.3% and European Union 29.7%. The Ringgit has been one of Asia’s best performing currencies in 2017, strengthening by 3% in the second quarter.

Hong Kong – ASEAN Free Trade Agreement to be signed in November
(13 July 2017) The anticipated free-trade agreement between ASEAN and Hong Kong is expected to be inked in November at the 31st ASEAN Summit and businessmen are urged to use the city as an entrance to mainland China. According to Philippines Secretary of Trade and Industry Ramon Lopez ASEAN will have the opportunity to expand economic cooperation with mainland China through Hong Kong and the city could also serve as a gateway for the mainland to transfer goods from ASEAN countries.

Thailand plans to set up ASEAN Organic Agriculture Foundation
(8 July 2017) Thai commerce ministry plans to get support from ASEAN countries to set up an ASEAN Organic Agriculture Foundation to increase organic agricultural products in the regional market. Thai Organic Trade Association President Peerachot Charanwong said the total global market for organic agricultural products was worth US$140 billion, with US$60 billion from the US, Canada and Europe and US$80 billion coming from the Asian markets such as India, China, Japan and Asean. Thailand’s Commerce Minister Apiradi Tantraporn said the proposed federation aims to improve the quality and standards of organic products as well as a platform for bargaining on the global markets.