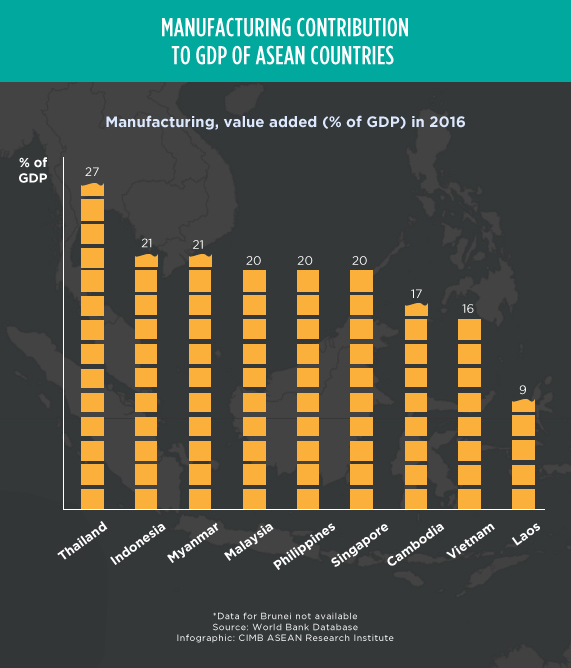 ASEAN’s manufacturing activity turned flat
(6 July 2017) After five months of expansion, Southeast Asia’s manufacturing activity turned flat in June, with the Nikkei ASEAN Manufacturing Purchasing Managers’ Index (PMI) teetering at 50 – the fine line between expansion and contraction. Indonesia, Myanmar and Malaysia experienced declines while Singapore and Philippines slowed down in manufacturing. IHS Markit, who conduct the survey explained that the PMI was worrying as it indicates a struggle in these countries to maintain manufacturing growth. This was most likely due to sticky inflation in input costs. Meanwhile, Thailand and Vietnam have showed stronger growth since June.

India to improve security networks with ASEAN
(23 June 2017) India has sought assistance to improve security networks with ASEAN countries through strong bilateral relations and economic and physical integration with member countries. India has a good reputation of being a reliable security partner and it is looking towards strengthening relations in the region by boosting security networks, benefiting from on going economic and physical integration and reviving historical links with the countries of Southeast Asia. Indian External Affairs Minister Sushma Swaraj said that India has been working with ASEAN to find peaceful solutions to various disputes while supporting ASEAN centrality.

ASEAN CEOs confident with company’s prospects
(22 June 2017) According to the KPMG 2017 Global CEO Outlook survey, 94% of ASEAN chief executive officers (CEOs) have confidence at their company’s prospects in the next 12 months. The results show that businesses are looking to employ more specialised talents and 92% of ASEAN CEOs expect to invest in digital technology such as artificial intelligence and data analytic tools in the next three years. KPMG Malaysia Managing Partner Datuk Johan Idris said greater digital investments would provide companies with more opportunities to secure a competitive advantage. He also said companies need to remain vigilant and avoid complacency to curb cyber-attack threats that continues to become a challenge in the digital age.

ASEAN nations focusing on deploying HELE
(26 June 2017) ASEAN countries are beginning to focus more on massive deployment on high efficiency, low emissions (HELE) technologies, especially countries which are still using coal-fired electricity. HELE was at the core of the discussion during the 14th Energy Security Forum (ESF) with ASEAN+3 members. Globally, many developed countries are moving towards emissions lowering technologies but the technology has yet to make progress in many ASEAN countries. Some of these countries are still at the stage of considering on policy steps and market reinforcements to encourage power plant developers to pursue technology upgrades in their existing facilities.

JICA urges ASEAN to further embrace unity to have a global influence
(24 June 2017) The Japan International Cooperation Agency (JICA) urged ASEAN members to further embrace their unity to have a larger global influence. JICA president Shinichi Kitaoka said ASEAN will lose its power if it is divided. He added that lessons from the European Union, show that common diplomacy instead of economic integration is the best outcome of a regional bloc. JICA also expects to see higher expansion of middle class across ASEAN which Kitaoka considers as the foundation of sound economy and politics. Currently, Indonesia, Philippines and Vietnam are the largest ASEAN beneficiaries of JICA.

S&P affirms rating on ASEAN Credit Guarantee and Investment Facility
(23 June 2017) S&P Global Ratings affirmed its “AA” long-term and “A-1+” short term issuer credit ratings on ASEAN’s Credit Guarantee and Investment Facility (CGIF) noting that the outlook was “stable”. The firm said its issuer credit ratings on CGIF reflected its assessment of the facility’s business profile as adequate and financial profile as extremely strong which resulted in a standalone credit profile (SACP) of “aa”. CGIF was established in 2010, help deepen and develop liquid local-currency bond markets among ASEAN members.

Malaysian and Australian securities commissions collaborate
(29 June 2017) The Securities Commission Malaysia (SC) signed an Innovation Cooperation Agreement with the Australian Securities and Investments commission (ASIC) to further promote innovation in financial services. SC will work closely with ASIC to share information on emerging trends and regulatory issues in digital finance and explore potential joint innovation projects. This significant milestone for SC is in line with its digital agenda where it has been introducing regulations and initiatives such as equity crowdfunding and digital investment management services to engage with the growing financial technology community in Malaysia.

Factory activity slowed but still remains best in ASEAN
(4 July 2017) Factory activity in the Philippines slowed at the end of second quarter but still showed strong expansion in June, according to IHS Markit survey conducted for Nikkei. The Nikkei Philippines Purchasing Managers’ Index (PMI) bared a 53.9 reading for June, lower from May with 54.3. However, it was enough to keep the country in the lead among other ASEAN members. Philippines’ Socioeconomic Planning Secretary Enersto M. Pernia expects economic expansion for second quarter to approach 7% from the government’s 6.5 to 7.5% 2017 target.

ASEAN wants India to take the lead in commerce, connectivity and security
(6 July 2017) According to panelists at the “ASEAN – India Relations: Charting course in the Next 25 years” dialogue ASEAN nations want India to take the lead in improving commerce, connectivity and security in the region. The Dialogue was organised by the Indian Ministry of External Affairs in collaboration with Observer Research Foundation (ORF) and the Federation of Indian Chambers of Commerce and Industry (FICCI) and the event was attended by policy makers, senior officials, diplomats, business leaders and think tanks both India and ASEAN. All panelists agreed that terrorism, religious extremism and the ISIS are dangers to the region and both India and ASEAN should work closer together to ensure these dangers are dealt with.

World Bank commits over US$2.7 billion to Myanmar, Cambodia and Laos projects
(5 July 2017) According to a World Bank press statement, the Bank is currently supporting 43 active projects in Myanmar, Cambodia and Laos with commitments of over US$2.7 billion as of June 2017. Myanmar accounts for over US$2 billion of these funds with 13 projects, Cambodia with US$243 million for 12 projects, and Laos with US$437 million for 18 projects. The Bank also appointed Ellen Goldstein as its new director for the three countries and she has been tasked to strengthen companies and deepen dialogue to end extreme poverty.