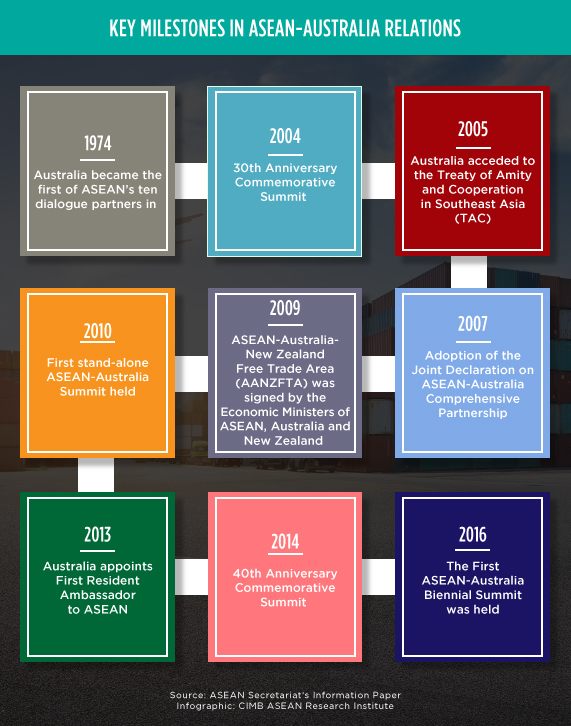 ASEAN and Australia strengthen partnership
21 June 2017) ASEAN and Australia reaffirmed their commitment to strengthen their strategic partnership at the 7th ASEAN-Australia Joint Cooperation Committee Meeting. The two parties agreed to work together in promoting peace, security and prosperity in the region and addressing regional challenges. Both sides exchanged views on the future direction of ASEAN-Australia Dialogue Relations and the importance of intensifying cooperation in strategic areas such as counterterrorism; cyber security, trade and investment, development of micro, small, and medium-sized enterprises, sustainable infrastructure, supply chains, and tourism. Australia committed to support ASEAN integration via the ASEAN-Australia Development Cooperation Program Phase II with a total contribution of approximately US$43 million.

Philippines: ASEAN remains resilient
(20 June 2017) During the ASEAN High Level Public Symposium, Assistant Secretary of the Office of ASEAN Affairs at the Philippines Department of Foreign Affairs Helen de la Vega said the nations have the ability to face external threats and challenges by remaining unwavering in their identity and strong in developmental processes in the political, economic, social, educational and cultural fields. ASEAN Secretary General Dr. Purin Pitsuwan added that the region shared challenges during the Asian Financial Crisis which made the bond between the member nations stronger and that ASEAN nations have to continue working together to achieve prosperity, security and resilience.

Need for SMEs to ride the digital wave
(20 June 2017) During the Singapore Business Federation (SBF) Digitize ASEAN 2017 conference, experts said that it is important for the small and medium enterprises (SMEs) in the ASEAN region to ride on the digital economy trend as it has the potential of adding US$1 trillion to the ASEAN GDP by 2025. Panelists said SMEs from various sectors have to have digital skills to keep up with the rapid change as they are the backbone for most ASEAN economies as 90 to 95 percent of these companies contribute to approximately 40 to 50 percent of the GDP. Lead researcher at ASEAN Studies Center at ISEAS Sanchita Basu-Das added that businesses that are still using the “old ways of doing business” are at risk of being wiped out.

Laos tourism sector needs to improve to compete with ASEAN neighbours
(20 June 2017) Laos’ tourism sector has to increase its competitiveness and integrate more with ASEAN countries in order to attract more international visitors. The country’s tourist arrivals decreased by 12 percent in the first three months of 2017. Project Director of the Regional Economic Integration into ASEAN Harmut Janus said that integration with ASEAN countries is important as most tourists are from neighbouring countries while sub-regional visitors who spend time and money in Laos is low. The tourism sector is important for socio-economic development because it creates jobs for people which are not linked to the exports of natural resources.

Sustainable tourism is important
(21 June 2017) At the ASEAN-China Quality and Sustainable Tourism Development Conference, Director of Malaysia Tourism’s Sarawak office Suriya Charles Buas said having a balance between the tourism sector and environmental protection is crucial to promote sustainable tourism. Tourism is increasingly becoming an important source of revenue for the ASEAN market. Chinese travellers make up the largest outbound tourism market in the world with an estimated 21.5 million visiting ASEAN countries in 2016. The Philippines ambassador to China Jose Santiago said uncontrolled tourism can cause many issues such as pollution, loss of habitats and threaten the survival of endangered species.

Philippines to provide ASEAN Single Window (ASW) trade system by December
(19 June 2017) The National Single Window (NSW) by the Philippines government’s trade facilitation customs system is expected to connect with the rest of Southeast Asia through ASEAN Single Window (ASW) by December. Tradenet, being the second phase of NSW, is currently under pilot-testing. This internet-based system will go through cyber security and stress tests before the roll-out. Tradenet is expected to become a single window trade-related agency with ASEAN as its counterpart to implement ASW. The function of ASW is to assist cargo clearance process, reduce cost and time of doing business and enhance trade efficiency and competitiveness within the region.

China manufacturers prefer to relocate facilities to ASEAN
(16 June 2017) A recently released report shows that Chinese manufacturers prefer to move their operations and production facilities to ASEAN countries rather than move further inland as was done previously. This is due to increasing wages in the inland areas of China. The report noted that the termination of Trans-Pacific Partnership (TPP) has driven this move to invest in ASEAN. The reasons oft cited are the region’s ample and cost-efficient labour supply, multiple trade pacts, regional stability, increasing wealth and rapid economic growth. Cambodia and Vietnam are the most favored destinations along with Myanmar and Indonesia, however, Malaysia is not preferred.

Agricultural export is still dependent on neighbouring countries
(21 June 2017) Agriculture exports from Myanmar are still reliant on neighbouring markets like China, Thailand and India despite efforts to expand agricultural products to other markets such as Europe and United States. This reliance means that Myanmar’s exports are vulnerable to shocks and changes in markets in these countries. Myanmar’s Commerce Deputy Minister U Aung Htoo said the industry faces other challenges as well including low crop yield per acre, a high production cost, low quality products that do not meet international standards and high costs of storage, transportation and distribution. To handle these issues, the ministry has been implementing a trade development plan to ensure the country produces high quality products for export to overseas markets.

Thailand to be a hub for growing seniors market
(22 June 2017) Thailand’s private and public sectors have to work collectively to position the country as a hub for ASEAN’s growing senior market. This is to help achieve “Thailand 4.0”, the Thai government’s economic model focused on increase the competitiveness of the country. Entrepreneurs are encouraged to leverage on this industry by developing their products and services to respond to the demands of the senior market as many retirees come to Thailand increasing the market potential. Thailand has long been developing its medical tourism industry and the government has shown clear signs of encouraging this trend through the policy of promoting a complete medical industry.

Indonesia offers Bali railway project to China
(15 June 2017) Indonesia has offered a railway project in Bali to Chinese investors. According to Indonesian Maritime Affairs Minister Luhut Pandjaitan, the railway will connect populated Denpasar to Gianyar and less populated, Singaraja. The railway construction is expected to start in 2018 and the project’s feasibility study has already been completed by Udaya University in cooperation with the World Bank.