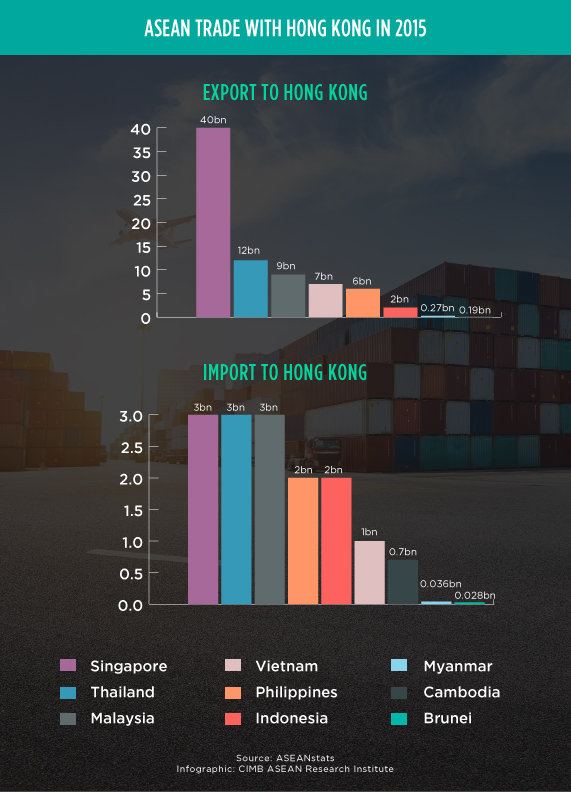 ASEAN, Hong Kong free trade agreement to be signed this year
(9 June 2017) After approximately three years of negotiations, the free trade agreement between Hong Kong and ASEAN will be signed this year. ASEAN is Hong Kong’s second largest trading partner. Asia is estimated to need US$26 trillion worth of investments from now to 2030 for utilities, power, telecommunications and transportation. In light of the upcoming agreement, Singaporean Minister for National Development Lawrence Wong said that this provides an opportunity for both Singapore and Hong Kong to develop new financing solutions to fit the needs of the region and to mobilise more private sector funds towards building infrastructure in the region.

Promising outlook on Thailand growth
(13 June 2017) The ASEAN+3 Macroeconomic Research Office (AMRO) shows Thailand’s economy will remain strong, forecasting it to grow at 3.4% this year and 3.5% for the next year due to the low-base effect. The country’s monetary and fiscal policies are capable to accommodate a sustained economic rebound as it has better fundamentals including the highest foreign reserves in ASEAN and a low foreign debt and low public debt ratio. However, the subdued private investment, such as high household debt and weak growth of small and medium-sized enterprises (SMEs), will remain a drag on the growth of the economy. There is also a need for the country to restructure the economy to increase its competitiveness and production efficiency.

Philippines seeks cooperation with Malaysia and Indonesia in fight against terrorism
(12 June 2017) Filipino Foreign Affairs Secretary Alan Peter Cayetano said that the Philippines is seeking closer cooperation with Malaysia and Indonesia in the fight against terrorism after President Duterte’s revelation that the leader of the Islamic State (IS) himself ordered the attacks in the southern city of Marawi. He said Indonesia has proposed a conference with Malaysia to discuss the situation in Mindanao and what the three countries can do to address the threat. He added that these discussions are urgent as the Philippines, Indonesia and Malaysia are likely to be the countries in ASEAN to be impacted as extremists will be looking for a base in the region.

Japan and ASEAN to sign agreement to develop refrigerated-distribution network
(14 June 2017) Japan’s transport ministers and ASEAN members are to sign an agreement on the development of a refrigerated-distribution network to meet growing demand for fresh foods by this October. The countries will look at the current state of logistics channels for each country and create common guidelines that includes rules for handling imports. ASEAN offers a promising market of about 620 million consumers that will broaden business opportunities for Japanese corporations.

Malaysia, Indonesia bond to strengthen through future proposals
(13 June 2017) Malaysia and Indonesia are important trading partners to each other. Between 2008 to 2016, Malaysia invested approximately US$15 billion in Indonesia and Indonesia has invested a total of about US$2.6 billion in Malaysia. Malaysia has established strong presence in important sectors in Indonesia and relationship between the countries will further strengthen as the two come up with specific proposals to boost collaboration in the area of the digital economy and through micro, small and medium enterprises. Malaysia’s International Trade and Industry Minister Datuk Seri Mustapa Mohamed said he had discussed these proposals with Indonesian Trade Minister Enggartiasto Lukita and President Jokowi.

Malaysia to ink power purchase agreements in September
(13 June 2017) Malaysia is optimistic that it will be able to sign power purchase agreements (PPAs) with Laos and Thailand for the ASEAN Power Grid in September in order to strengthen energy supply. The ASEAN Power Grid is a power network that connects all ASEAN countries to ensure energy security, greater utilisation of shared resources and ensure cheaper electricity for people. Energy, Green Technology and Water Minister Datuk Seri Dr Maximus Ongkili said the pilot project, which starts in January 2018, would open up opportunities for Malaysia to source renewable energy from neighbouring countries.

Singapore offers support to China’s global ambitions
(12 June 2017) Singapore is offering its financial industry to help fund China’s ambition to develop ports, railways, power plants and other projects across Asia, Europe and east Africa. By partnering in financial matters, Singapore aims to restore strained ties with China and profit from its global aspirations. However, experts claim that Singapore will face stiff competition from countries such as Hong Kong and London which also hope to play key roles in China’s effort to integrate economies. The relationship between Singapore and China is to be further strengthened as the countries work together to advance Regional Comprehensive Economic Partnership (RCEP), a pending trade deal among the ASEAN countries, China, India, Japan and others.

Suu Kyi visits Trudeau to learn about Federalism
(8 June 2017) Myanmar’s State Counsellor Aung San Suu Kyi met with Canadian Prime Minister Justin Trudeau to learn about Canadian federalism, a governmental system she believes could bring stability to her country. Trudeau announced US$6.63 million in aid to support the peace process in Myanmar and to provide emergency food assistance, shelter and health care to vulnerable populations. He added that Myanmar should increase efforts to uphold human rights, particularly with respect to women, youth and protection of the minorities.

Vietnam still considering the TPP
(15 June 2017) Vietnamese Prime Minister Nguyen Xuan Phuc said that his minister in charge of trade has been assigned to discuss a way to balance and harmonise the interests of the remaining signatories of the Trans-Pacific Partnership (TPP). It was unclear whether he thinks that the 11 members should renegotiate the agreement but said that Vietnam was still considering the trade deal and that the country will make a decision on whether to renegotiate it once his minister reports back on what each country stands to gain if all involved were to go ahead with the agreement.