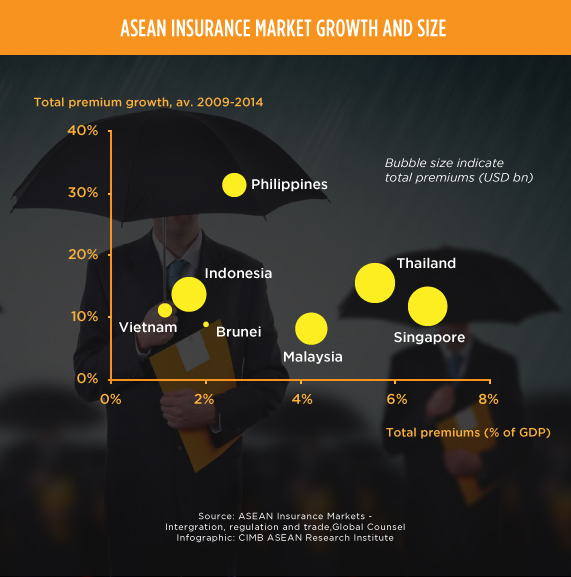 Myanmar to liberalise its insurance market
(8 June 2017) Managing Director of state-run Myanmar Insurance Sandar Oo revealed at the Myanmar Investment Forum 2017, that the Ministry of Planning and Finance intends to release a blueprint for insurance market reforms in the next three months. This includes allowing foreign insurers to underwrite and sell policies. The reforms, approved by cabinet, were developed with the assistance of the World Bank in order to ensure a well-structured and competitive insurance market.

ASEAN’s PMI weakens in May
(2 June 2017) Nikkei ASEAN Manufacturing Purchasing Managers’ Index (PMI) slipped from 51.1 in April to 50.5 in May. Manufacturing output across ASEAN showed signs of a slowdown in May reflecting weaker increases in new orders and production, weighing down business confidence. The data indicated that only four of the seven countries covered by the survey saw growth across their manufacturing sectors, down from six in April.

Tax system helps Philippines
(1 June 2017) The Philippines economy will likely outperform its ASEAN peers due to an overhaul in the country’s tax system making it more attractive to investors, according to an ASEAN fund manager for Samsung Asset Management. It is believe that foreign funds will return to the Philippines and the country is likely to have a 15 percent return on investment potential, higher than Singapore and Malaysia.

Australian PM launches new ASEAN chambers of commerce
(3 June 2017) Australian Prime Minister Malcolm Turnbull launched the Australian Chambers of Commerce and Business Councils, or AustCham ASEAN to allow Australian businesses to access information and assistance in overcoming hurdles to investm­ent. Seven Australian chambers and business councils will be collaborating under AustCham. The aim of the collective is to help with regional integration, and to promote business-friendly policies and regulations.

ASEAN to ask for legally binding South China Sea rules
(6 June 2017) ASEAN Secretary-General Le Luong Minh, ASEAN aims for a legally binding code of conduct (COC) on the South China Sea when it negotiates with Beijing. Senior ASEAN and Chinese diplomats agreed on a draft framework for the code in May . However, the framework, will have to be approved by ministers and leaders before parties can discuss specific details, Minh said. He also added that ASEAN wants an “early conclusion” for the code of conduct. But China has not openly backed the idea of having legally binding rules, something that analysts see as a major factor that could further delay the CoC.

ASEAN and Australia to deepen defence cooperation to fight IS
(5 June 2017) ASEAN nations plan to use spy planes and drones to stem the movement of militants across their borders, defence officials said at the weekend, as concerns rise over the growing clout of Islamic State (IS) in the region. Indonesia, Malaysia and the Philippines said they will launch joint air patrols this month at their shared boundaries in the Sulu Sea, in addition to existing maritime patrols. Authorities in the region have urged greater cooperation to counter the fallout from a battle with IS-linked militants in the southern Philippines, the biggest warning yet that the ultra-radical group is building a base in Southeast Asia.

Singapore and China reiterate friendly defence ties
(2 June 2017) Singapore and China have reaffirmed their “warm and friendly” bilateral defence relationship, during a meeting between Defence Minister Ng Eng Hen and Vice President of the Chinese army’s Academy of Military Sciences Lieutenant-General He Lei. They re-emphasised the value of the Four-Point Consensus agreed in 2014 between Dr Ng and Chinese Minister of National Defence General Chang Wanquan, and agreed to further strengthen bilateral defence cooperation.

Chinese bank invests in Laos SMEs
(6 June 2017) The Laos-China Bank (LCNB) has been providing practical services to help small and medium-sized enterprises (SMEs) in Laos solve their financing problems. Despite the presence of over 40 commercial banks in Laos, their products and services are simple, especially financing business where capital is poured mostly to big enterprises, leaving a gap of SME services in the financial market.