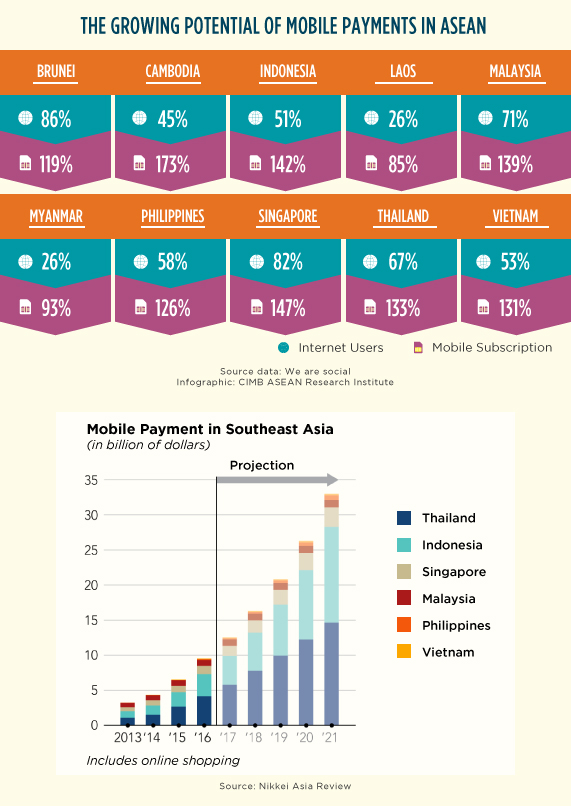 Mobile payments to be the norm in ASEAN soon
(1 June 2017) Some of the larger economies in ASEAN, Indonesia, Malaysia, Singapore and Thailand are moving rapidly towards mobile payments. British research firm Euromonitor said that on average, about 50 percent of the population in six major Southeast Asian nations use smartphones. This is expected to exceed 70 percent in 2021, approaching the 80% rate of Japan and the U.S. Mobile payment systems can also be credited, meaning users can top off their digital wallets in rural areas that do not have banks but do have a shop within a mobile payment network. Euromonitor predicts that by 2021 around US$32 billion worth of mobile payments will be made, 10 times that in 2013.

Malaysian MITI to form group to propose ideas to improve trade
(27 May 2017) The Malaysian Ministry of International Trade and Industry (MITI) will establish a programme called the Asean Circle to brainstorm new ideas with the aim of increasing trade in the Asean Economic Community and proposing solutions pertaining to non-tariff measures. MITI Minister Dato’Sri Mustapa Mohamed said the programme would be launched on June 18. He added that while ASEAN showed promising growth through liberalisation of tariffs among member states, intra-ASEAN trade remained stagnant between 20 and 25 percent due to non-tariff measures.

Russia and Philippines get close on security and defense issues
(26 May 2017) The Philippines and Russia have seen an improvement and warming of ties in security and defence areas. In fact, Filipino Defense Secretary Delfin Lorenzana said that Russia wants more engagements with other ASEAN member states as well. Russia has already established ties with other members states such as Vietnam. Lorenzana was part of President Rodrigo Duterte’s four-day visit to Russia during which the two nations signed an Agreement on Defense Cooperation that will pave the way for more exchanges between their defense establishments.

ASEAN parliamentarians criticise Hun Sen’s CPP ahead of elections
(1 June 2017) ASEAN parliamentarians have criticised Cambodia People’s Party of potentially keeping opposition voters from the polls or from voting for their chosen candidates ahead of Sunday’s elections. They cited a comment by Defense Minister Tea Banh earlier this month that he would “smash the teeth” of those opposing Sunday’s commune election results and Prime Minister Hun Sen’s boast last week that he was willing to “eliminate 100 or 200 people” to prevent being overthrown. However, the ruling government said that Cambodia enjoys peace and stability and that every political party has the opportunity.

Economic partnership to be inked between India and ASEAN
(30 May 2017) An Indian Ministry of External Affairs representative said that comprehensive economic partnership between India, ASEAN and six Free Trade Agreement (FTA) partners will likely take place in 2017. The agreement will cover trade, services and investment to achieve the potential of trade between India and the region. ASEAN is India’s fourth largest trading partner. The aim is also to boost connectivity to strengthen the partnership between the two regions, the trilateral highway between India, Myanmar and Thailand and the Kaladan multi-modal transit project are the prime focus of the Indian government.

Malaysia says that ASEAN will benefit from closer ties to Russia
(30 May 2017) Director General of the ASEAN-Malaysia National Secretariat Jojie Samuel said that Malaysia intends to undertake several initiatives to promote closer economic engagement of Russia and the ASEAN member countries. He noted that total trade between ASEAN and Russia stood at US$13.4 billion in 2015 and that Russia is ASEAN’s 8th largest trading partner. He added that Malaysia hopes to undertake several initiatives to promote closer economic engagement such as through the exchange of business visits, convening of business seminars, trade fairs and language courses. He added that the region can count on Russia to play a constructive role in ensuring a peaceful, predictable and stable environment for the Asia Pacific region.

South Korean exports to ASEAN double due to FTA
(31 May 2017) According to South Korea’s Ministry of Trade, Industry and Energy outbound shipments to ASEAN countries reached US$74.5 billion in 2016, compared with US$32.1 billion in 2006. This increase in commerce and investment over the last decade was attributed to the implementation of a free trade deal. Total trade between South Korea and ASEAN increased 5.7 percent every year between 2006 to 2016. ASEAN is now South Korea’s second largest trading partner. Efforts are being made to upgrade the 10-year old FTA between South Korea and ASEAN to expand market openness and tariff cuts.

ASEAN banks to set up in Philippines
(28 May 2017) Deputy Governor Nestor A. Espenilla Jr. of the Filipino central bank said banks from Malaysia, Thailand and Indonesia have been scouting for investment opportunities in the country. He said they are encouraging foreign bank competition to improve financial products in the country and improve the deposits base. Espenilla said new banking investors are about to make their presence known soon and their interests are “directly linkable” to the ASEAN Banking Integration Framework or ABIF initiatives. ABIF provides the general principles for the entry of QABs from one ASEAN member-state to another.

Myanmar talks result in partial agreement of federal state principles
(30 May 2017) The Myanmar government, along with representatives from the military and eight armed ethnic groups met for the second meeting of the 21st Century Panglong Peace Conference between May 24 to 29. They reached agreements on various matters of contention, including the basic principles for establishing a democratic federal system that would give the groups greater autonomy which included 37 points, from language and education to cultural preservation and the economy. The representatives remained at odds, however, on whether to permit secession from the federal system and how to treat forces controlled by the armed groups. Those matters will be taken up at the next meeting, to be held in six months. The eight ethnic groups represented currently have a ceasefire agreement with the government.

China and Thailand strengthen military ties
(30 May 2017) Thailand and China pledged to push forward the all-round development of the military relations between the two countries.Thai Prime Minister Prayut Chan-o-cha said that the kingdom is ready to learn from China’s experiences on reform and combine its national development strategy with the China-proposed Belt and Road Initiative. Thailand is also ready to boost cooperation in joint training on counter-terrorism with China.