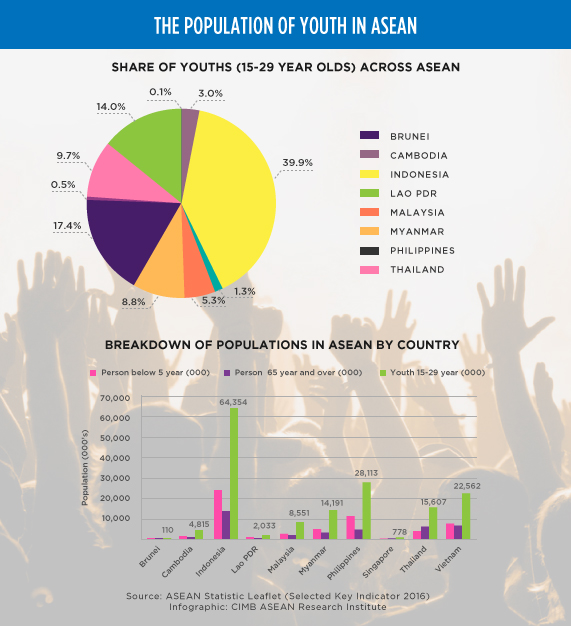 Youth see a positive future in ASEAN
(13 May 2017) The World Economic Forum released its Asean Youth Survey at its annual forum on ASEAN in Cambodia. They survey showed that 69 percent of respondents in the six countries polled – Indonesia, Malaysia, Philippines, Singapore, Thailand and Vietnam – expect to have a better life than their parents do. The survey was taken by 24,000 young people aged 16-22 for their views on ASEAN and their prospects. Around three-quarters of respondents felt that their countries are better off as part of ASEAN. Two-thirds felt that ASEAN membership benefits them personally with regards to improved job prospects, while only 5 percent thought it will make their lives worse.

ASEAN car market set to grow in 2017
(18 May 2017) The auto market in ASEAN indicates healthy demand for the rest of the year across the region’s largest five economies. The Financial Times’ Auto Purchase Index, which measures the six-month outlook for auto sales, moved slightly upwards in Indonesia and Thailand and showed small declines for Malaysia, the Philippines and Vietnam. However, the Financial Times’ Motorcycle Purchase Index fell in four of the five countries. Only Malaysia posted a slight increase. This is in contrast to the auto market, which continues to see many first-time buyers as the consumer class in the region expands.

Philippines GDP growth slows
(18 May 2017) The Philippines’ economy grew at its slowest pace since the last quarter of 2015. This was due to weaker government spending, but strong exports and domestic consumption suggest the Southeast Asian country remains poised to raise rates this year. Gross domestic product (GDP) grew at 6.4 percent in the first quarter of this year below forecasts of 6.8 percent. Despite a fall in growth, the country remains one of the fastest growing economies in Asia with robust consumption, which fueled last year’s growth, continuing to bolster economic activity as exports pick up. However, economists believe that strong exports and consumer spending will lead the central bank to raise interest rates this year.

More ASEAN businesses turn to US$ bond markets for financing
(15 May 2017) ASEAN companies are tapping into more funds in the international market. Between January to April of 2017 ASEAN businesses raised US$12.1 billion in the bond markets. In 2016, they raised approximately US$23.8 billion. Local bond markets where debt is issued in the domestic currencies, such as Indonesia, is unable to give companies what they need. For example, it makes more sense for a geothermal plant which has to buy components and raw materials from overseas to match the funding in USD.

New development fund launched at WEF
(15 May 2017) The Sustainable Development Investment Partnership (SDIP) was launched at the World Economic Forum on ASEAN 2017. The new SDIP Asean Hub aims to support infrastructure development in the Southeast Asian region by helping local projects attain funding and promoting blended finance, the use of public, private and charitable money for investing into development projects. Cambodia was the first regional government to sign up. The SDIP, an initiative by the Organisation for Economic Cooperation and Development (OECD) and the WEF, is made up of 35 global governments, banks, pension funds and charitable organisations.

Low cost carrier to enter Cambodia
(17 May 2017) Group CEO of AirAsia Bhd Tan Sri Tony Fernandes met with Cambodian Prime Minister Hun Sen last week on the sidelines of the World Economic Forum on ASEAN to explain why there was a need to set up AirAsia Cambodia. Tony Fernandes said that this subsidiary was needed to handle an increasing number of air travellers from Malaysia to Phnom Penh, Siem Reap and Sihanoukville. Cambodian Minister of Public Works and Transport Sun Chanthol said that Hun Sen fully supported Tony Fernandes’ decision.

Duterte wants Mongolia and Turkey to join ASEAN
(16 May 2017) Philippines President Rodrigo Duterte said he would push for the inclusion of Turkey and Mongolia in ASEAN. He dismissed concerns about their geographic location. Duterte said leaders of Turkey and Mongolia told him about their desire to join the regional bloc at the Belt and Road Forum in China. Geographic location is the first criterion for ASEAN membership, along with recognition by all other members. However Duterte insisted that the two nations were part of the region and that he could allow them entry as the Philippines holds the Chairmanship for this year.

Chinese automaker expands operations in Thailand
(17 May 2017) Chinese automaker SAIC Motor is planning to use Thailand as a hub for manufacturing and export of cars to other parts of Southeast Asia and beyond, emulating the route taken by Japanese automakers decades ago. The major Chinese carmaker has been manufacturing MG-brand vehicles in Thailand through a joint venture with local conglomerate Charoen Pokphand Group. The venture, SAIC-CP Motor, is currently building its second plant in the country southeast of Bangkok, and is reportedly spending over 30 billion baht (US$870 million). The brand’s dealership network is also set to increase by 50 percent to 90 locations by the end of the year.

Chinese and Laotian leader meet on cooperation
(13 May 2017) During Premier Li Keqiang’s meeting with Laotian President Bounnhang Vorachit he said that China wants to deepen cooperation with Laos. This cooperation would focus on key projects such as China-Laos railway and cross-border economic cooperation zones and key areas such as infrastructure construction, resource exploration and development, agriculture and power supply. The meeting took place prior to the meeting on Belt and Road Forum for International Cooperation.

Australian encourages firms to invest in Myanmar
(15 May 2017) The Australian government would encourage its businesses to seize the enormous opportunities in Myanmar. Australian firms’ interest in Myanmar has been on the rise, driven by the improving political climate and stronger bilateral ties. By the end of the first quarter of 2017, 18 Australian firms had been approved by the Myanmar Investment Commission to bring in a combined capital of US$145.8 million. Despite the fact that rents are relatively high and the power supply is not always very reliable, Australian trade and investment has been increasing around 15 per cent on a yearly basis. Oil and gas, mining, tourism and education are the most attractive sectors for Australian investment.