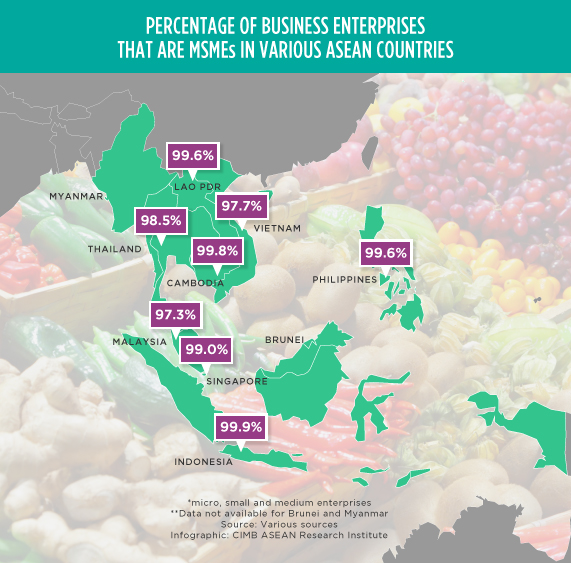 ASEAN places emphasis on MSMEs as driver of regional growth
(28 April 2017) In its Chairmanship year, the Philippines is keen to place emphasis on micro small and medium enterprises (MSMEs) as the key drivers of economic growth in the region with its thematic priority of “inclusive, innovation-led growth”. The Philippines Department of Trade and Industry Secretary and current ASEAN Economic Ministers (AEM) chair Ramon Lopez said that various MSME development initiatives are already on-going and have been prioritized for implementation throughout the year. These initiatives include trade and business facilitation, e-commerce, inclusive business, business facilitation and cross-country immersion, and women and youth economic empowerment.

ASEAN’s stance on North Korea remains consistent, Sec-Gen
(28 April 2017) ASEAN Secretary-General Le Luong Minh has said that the regional bloc’s position on North Korea remains the same and this includes calling for the de-escalation of the standoff, denuclearisation and for the resumption of the six-party talks. The six party talks between North and South Korea, China, the US, Japan and Russia last took place in 2008 and collapsed after a rocket launch by the Pyongyang regime. ASEAN Foreign Ministers’ statement on the issue also urged North Korea to comply fully with its obligations arising from all relevant United Nations Security Council (UNSC) Resolutions and international laws in the interest of maintaining international peace and security.

ASEAN looks to civil service to help achieve Vision 2025
(29 April 2017) Governments of ASEAN Member States signed the “ASEAN Declaration on the Role of Civil Service as A Catalyst for Achieving AC Vision 2025″ during the 30th ASEAN Summit in Manila, Philippines. The Philippines President Rodrigo Duterte said that the declaration recognises the significance of the civil service in ASEAN Community building. It also highlighted the civil service as the backbone of good governance and a catalyst for enhanced cross-sector and cross-pillar cooperation in building the ASEAN Community. The initiatives under the declaration strive for the highest standards of professionalism, efficiency, effectiveness, participatory approach, responsiveness, transparency and accountability of civil service.

ASEAN currencies rally against the dollar
(3 May 2017) The ringgit and the peso have turned from laggards to leaders as both the currencies rebound. The ringgit gained 2 percent while the peso rose by 0.5 percent. The increasing strength of both currencies has led to increased activity in the equities markets. Since the end of March US$581 million and US$198 million of global funds have poured into the Malaysian and the Philippines markets respectively. Investors are drawn to the Philippines due to the tax reforms that are due to take place. Malaysia is appealing to investors due to the recent improvement in commodity prices which has seen the FBM KLCI rise for the past five months.

Thailand may face struggle to accommodate growing tourist inflow
(27 April 2017) Thailand’s tourist inflows are to nearly double by 2030 with an estimated 60 million visitors expected. However, the Southeast Asian kingdom may face “trouble” if investments are not made in infrastructure to accommodate the expected surge in tourist arrivals according to Pongpanu Svetarundra, permanent secretary to the tourism ministry. Thailand is heavily reliant on its tourism industry which has kept its economy growing despite much political instability over the last decade.

Malaysian Prime Minister pushes for removal of trade barriers within ASEAN
(28 April 2017) At the “Prosperity For All” Summit organised by the Asean Business Advisory Council in Manila, Malaysian Prime Minister Datuk Seri Najib Tun Razak during his keynote said ASEAN must work to bring tariffs in Asean down to zero must be pursued vigorously in order to facilitate intra-ASEAN trade further. In order for intra-ASEAN trade to be at the projected figure of US$9.2tril by 2050, there has to be a 20 percent reduction in fixed trade costs. He highlighted that non-tariff barriers and measures must be reduced and ultimately removed and that Between 2000 and 2015, NTBs and NTMs in Asean actually rose from 1,634 measures to 5,975. He noted that this was not just an ASEAN problem but one that plagued the global trade.

The poor in the region still cannot feel the benefits of ASEAN
(28 April 2017) University of the Philippines Asian Studies Professor Eduardo Tadem said that those who are poor in the region still do not feel the benefits of ASEAN. He said that despite the high economic growth rather that it has been an exclusive kind of growth which continually marginalises the poor, the disadvantaged, and disenfranchised. He added that most Southeast Asian countries base their economy on market trends which are usually in favour of big businesses that are simply profit-oriented and do not serve the population in the rural and countryside areas. Tadem also pointed out that the ASEAN system lacks public participation in its decision-making process.

ASEAN shelves declaration on rights of migrant workers
(28 April 2017) ASEAN member states failed to reach a consensus on the Declaration on the Promotion and Protection of Migrant Workers’ Rights, leading to senior officials to shelving the declaration for the next summit in November. For months Indonesia and the Philippines had played up the adoption of the declaration which would provide robust protection for all migrant workers in the region. Jakarta finds itself in the minority of those who insist on the declaration’s legally-binding nature, as Manila is resigned to the idea of a non-enforceable instrument. It is hoped that the the instrument is to be completed in the coming months, so that it can be tapped as an outcome document at the November leaders’ summit.

ASEAN soft on China’s activities in South China Sea
(30 April 2017) ASEAN has avoided making any references to the rulings against China by the Hague-based arbitration court on the issue of South China Sea (SCS) or the militarisation of various islands in the area by China. The join statement by ASEAN on the issues called for the effective implementation of the code of conduct (COC) for the SCS. It reiterated that the framework document for COC is to be ready by June 2017, allowing for the early adoption of the code. Philippine Foreign Ministry official Zaldy Patron, who is in-charge of ASEAN affairs, said that no country pushed hard on the issue and that leaders were looking to improving ASEAN’s relationship with China. China welcomes the softer stance on the disputed area and said that this is a sign that efforts to ease tensions were working.

Suu Kyi and Jokowi meet on the sidelines of ASEAN Summit
(2 May 2017) Myanmar de facto leader Aung San Suu Kyi met for a short 30 minute meeting with Indonesian counterpart President Joko Widodo. The main topic of discussion was the Rohingya crisis in Myanmar. President Jokowi secured a commitment from Myanmar that they were committed to resolving the refugee crisis, managed to gain access to the conflict area in order for Indonesia to build a hospital, and ensured that Indonesian humanitarian aid can continue passing through to the area.