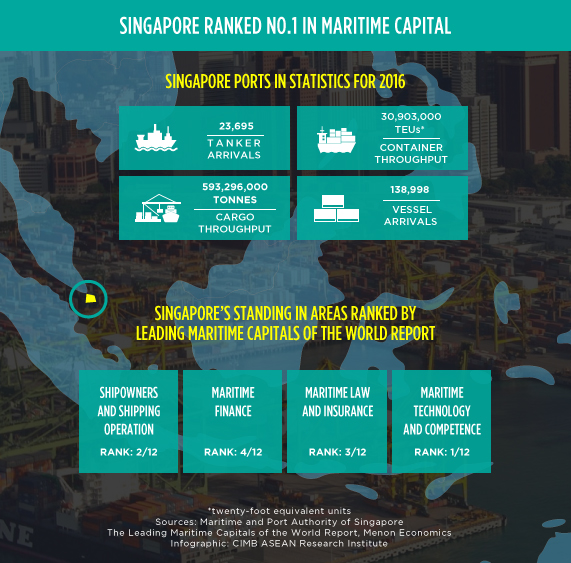 Singapore world’s top maritime capital
April 26 2017 – An annual report titled, “Leading Maritime Capitals of the World,” by a Norwegian consulting firm has ranked Singapore as the the world’s top maritime capital. Singapore is home to the fourth largest fleet in the world. The report looks at four main areas – the city’s strengths as a shipping center, offerings for maritime finance and law, maritime technology, ports and logistics, and it also includes its overall attractiveness and competitiveness. Esben Poulsson, President of the Singapore Shipping Association commented that Singapore is able to maintain this rank due to its continued innovation and its strong maritime services environment, which includes legal insurance and shipbroking.

US President expected to attend ASEAN anniversary celebrations
April 19 2017 – US President Donald Trump will be attending the ASEAN 50th anniversary celebrations in November in the Philippines. He is expected to join 14 other heads of state including Russian President Vladimir Putin, Japanese Prime Minister Shinzo Abe and acting South Korean President Hwang Kyo-Ahn. Filipino Department of Tourism director for Central Luzon Ronnie Tiotuico said that preparations were already underway for Trump’s stay at the Mimosa Leisure Estate. Various construction projects are also underway in order to accommodate other leaders.

Rising unemployment may impact economic growth
April 25 2017 – According to economists, increasing unemployment rates and rising inflation are a source of concern for the Malaysian economy. Malaysian Institute of Economic Research (MIER) executive director Emeritus Professor Dr Zakariah Abdul Rashid said that the labour market problems would “retard” economic growth. Other economists say that if the labour market continues in this vein that it will impact domestic consumption negatively. Another economist added that the high levels of household debt in the country were also a cause of concern especially if unemployment levels continue to rise.

US urges ASEAN to speak out against North Korea
April 25 2017 – Ahead of the ASEAN Summit in Manila the US has urged ASEAN leaders to speak out strongly against North Korea. Tensions in the Korean Peninsula have been on the rise, particularly since the assassination of North Korean leader Kim Jong Un’s older brother, Kim Jong Nam, at the Kuala Lumpur international airport in February. Issues of concern include North Korea’s nuclear tests and ballistic missile launches as well as the detaining of Malaysian diplomats in Pyongyang soon after Kim Jong Nam’s death. However, it is unclear if there is an appetite among ASEAN leaders to issue a strong, standalone statement on North Korea.

PHILIPPINES/h3>
Philippines continues to clamp down on mining industry
April 27 2017 – Philippine Environment Secretary Regina Lopez will be banning open-pit mining in the country. Her continued stance against the mining industry which she blames for extensive environmental damage in the country comes a few days before her confirmation hearing in Congress. The hearing could lead to her removal as minister due to complaints from pro-mining groups. She has said that the ban will come into effect immediately but will not cover existing mines.

Malaysia may invest US$4 billion in Indonesia
April 27 2017 – Indonesia’s Disadvantaged Regions and Transmigration Minister Eko Putro Sandjojo said that a dozen Malaysian companies were keen on investing up to US$4.14 billion in Indonesia. This comes after his visit to the neighbouring country to seek investments on the instruction of President Jokowi. Among the interested parties are YTL Corporation Berhad, which is already involved in the development of coal-fire power in Central Java, and United Engineers Malaysia (UEM) which is on the verge of sealing a deal to continue the construction of toll road in Indonesia. Business delegates from Malaysia are due to arrive in Indonesia in early May for further discussions.

Taiwanese look to employment opportunities in ASEAN
April 21 2017 – As an increasing number of Taiwanese companies look to expand into the ASEAN region, the employment opportunities for Taiwanese nationals is also on the rise. According to a survey done by 104 Job Bank, a local job bank, 55 percent of local businesses surveyed reported an increasing need for employees to be located in Southeast Asia in the next three years. Furthermore, the job bank found that for every four overseas job opportunities, one was in an ASEAN country. The top three ASEAN countries with the most job opportunities were Vietnam, with 1,711 job openings, the Philippines (1,440) and Singapore (802).

Thailand prepare submission to US for trade surplus probe
April 27 2017 – Thailand is in the midst of preparing a detailed report on the factors causing its trade surplus with the US. Commerce Permanent Secretary Wiboonlasana Ruamraksa, met with members of the public and private sectors yesterday to prepare Thailand’s submission to the US government to meet the May 10 deadline for the report. The report will include an emphasis on the long-standing relationship between the US and Thailand, recent developments in Thailand’s legal and regulatory reforms, measures to increase the ease of doing business and efforts to step up labour and intellectual property protection. It is hoped that the report will give the US government a better understanding of the bilateral trade balance and how it had occurred naturally, in line with global trading rules.

World Bank loans US$100 million to develop Myanmar’s financial sector
April 24 2017 – The World Bank’s International Development Association has lent Myanmar US$100 million to improve its financial sector. The loan has a low interest rate of 0.75 percent per annum which will only kick in after six years with a repayment period of 32 years, essentially making the loan a 38 year commitment. U Maung Maung Win, deputy minister at Myanmar’s Ministry of Planning and Finance, said that the project, known as the the Myanmar Financial Development Project, will help improve the government banks’ services, encourage strong financial institution laws and management policies, and modernise the basic building blocks of the financial sector while assisting the expansion of financial services to support the public, and SMEs.

Chinese company to build agriculture park in Laos
April 26 2017 – The Lao Ministry of Agriculture and Forestry signed a Memorandum of Understanding with China’s Xuanye (Lao) Co., Ltd to build a modern agricultural industrial park in Laos. The project will be complementary to the currently under construction China-Laos railway, and will serve as a regional hub for agriculture. Lao Minister of Agriculture and Forestry Lien Thikeo said the country has benefitted from the launching of the Belt and Road Initiative. He said that many Chinese enterprises have come to invest in Laos with constructive proposals, providing Laos with the opportunity to go from a land-locked to a land-linked country.