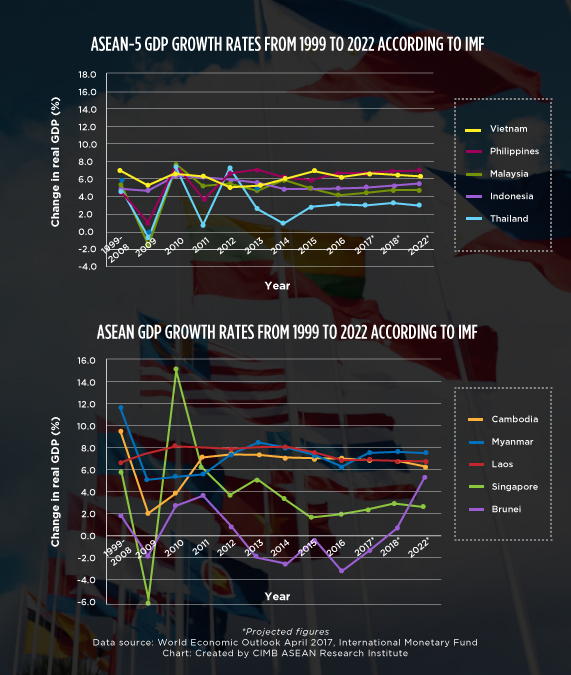 Growth to accelerate in ASEAN-5 in 2017
19 April 2017 – The recently released IMF’s World Economic Outlook projects, April 2017 predicts that four out of the ASEAN-5 countries, namely Indonesia, Malaysia, Philippines and Vietnam, will see a slight acceleration in economic activity this year. While Thailand is projected to recover from a temporary dip in tourism and consumption it suffered in late 2016. Growth in 2017 is projected to be 5.1 percent in Indonesia, 4.5 percent in Malaysia, 6.8 percent in the Philippines, and 6.5 percent in Vietnam. Indonesia, Malaysia, Vietnam and Thailand will see a short term increase in growth as a result of stronger domestic demand while the growth in the Philippines will be led by higher public spending.

Ahok loses out to Anies in second round of Jakarta elections

20 April 2017 – While official results will not be announced until early May incumbent Governor, Basuki “Ahok” Tjahaja Purnama, has admitted defeat to his rival Anies Baswedan in the Jakarta elections. Many have called the tactics in the campaign leading up to the elections as “dirty” and “polarising”. Anies’ victory is seen as a win for the conservative muslims who were strongly opposed to a Chinese Christian governor running the country’s capital city. Ahok’s loss may have an impact on President Jokowi’s campaign for the 2019 presidential elections. Many were also relieved with the result as there were fears that if Ahok won there would be a violent outburst from his opposers.

Inflation likely to taper in second half of 2017
20 April 2017 – The inflation rate in Malaysia reached an eight year high in March 2017 hitting 5.1 percent. Economists have said that this comes as no surprise as rising fuel prices and a weakening exchange rate have been contributing to a higher CPI. However, they also believe that inflation will taper off in the second half of the year with oil prices normalising. According to a local Malaysian economic research organisation, since this is cost-driven inflation, the government is unable to do much besides work on supply-side policies to improve productivity.

Pence visits Indonesia, announces deals worth US$10 billion
21 April 2017 – On his visit to Indonesia US Vice President Mike Pence announced 11 deals between US and Indonesian companies. The deals worth in excess of US$10 billion are largely in the energy and defence sectors and include large players such as ExxonMobil Mobil Corporation, General Electric Company and Lockheed Martin Corporation. During his meeting with Indonesian Vice President Jusuf Kalla, Pence said that there is a tremendous excitement that American companies feel about the opportunities that Indonesia holds. This comes a couple of weeks after President Trump included Indonesia on his trade hit-list for having a surplus with the US.

Thailand in top 20 preferred destinations for FDI
19 April 2017 – Thailand has comes in at 19 in A.T. Kearney’s Foreign Direct Investment (FDI) Confidence Index for 2017, moving up two spots. Despite the fact that FDI flows into Thailand actually fell in 2016, the number of application for foreign investments tripled in value in 2016 along with rising investor optimism has led to continued interest in the country. The index is a constructed using proprietary data from a survey administered to senior executives of leading global corporations. Since 1998, the study has continued to be a reliable indicator of corporations’ top choices for FDI globally.

Cost of doing business in the city state rises
19 April 2017 – Singapore is becoming increasingly expensive for businesses to operate in – with increasing water prices, higher diesel costs and a carbon tax on the horizon. Businesses are being forced to adjust their operation costs to keep up with the rising cost of doing businesses. As the economy recovers from an export slump there may be a pick-up in inflation as was hinted by the Monetary Authority of Singapore in a statement earlier in April. Businesses are most concerned with the rising water prices however the city state continues to be an attractive place to do businesses due to reliable power and water supply, business-friendly framework, stable legal and political system and competitive tax rates.

Duterte u-turn on visit to disputed islands in South China Sea
19 April 2017 – Concession projects in Laos will cut by half the maximum investment period for new concession projects, giving them a maximum period of 50 years instead of the previous term of 99 years. This new law was issued by a presidential decree after it was passed in November 2016. The change was made in an attempt to boost the economy with more flexible terms. It is believed that this change will also allow for concession conditions to be revised more regularly to ensure they do not become outdated. It is hoped that this change will aid Laos move up in the World Bank’s ease of doing business rankings where it is currently at 134 out of 189 countries ranked.

Vietnam losing competitive edge in pricing for tourism
18 April 2017 – In a report released every two years Vietnam has lost its price competitiveness in tourism going from the the third cheapest destination in Southeast Asia in 2015 to third most-expensive in 2017. Improvements in Laos’ tourism industry have also impacted Vietnam’s price competitiveness. However, the Travel and Tourism Competitiveness Report 2017 produced by the World Economic Forum, sees Vietnam jumping eight positions to hit 67th in rankings of competitive tourism destinations. The index scores countries in 14 areas, with Vietnam doing poorly in those related to the environment and pollution.

China’s second largest bank opens private banking centre in Singapore
18 April 2017 – China Construction Bank (CCB) has announced the opening of an infrastructure financing services centre, a private banking centre and an investment services subsidiary in Singapore in addition to its existing branch in the city state. This is another step in the two countries enhancing their financial market collaborations. With the opening of these new centres Chinese companies will be able to leverage further on Singapore as an infrastructure financing hub for China’s various One Belt One Road projects.

Thailand popular among skilled filipino workers
16 April 2017 – Many ASEAN workers are drawn to Thailand according to the Thai Department of Employment (DE), specifically those from the Philippines. In fact, there are 14,830 skilled workers from the Philippines in Thailand followed by Malaysia (2,924), Singapore (2,034), Myanmar (1,948) and Indonesia (1,279). From a total of 1,380,349 workers in Thailand 50,000 are skilled labour and technicians with jobs in teaching, management, engineering, architecture and business.