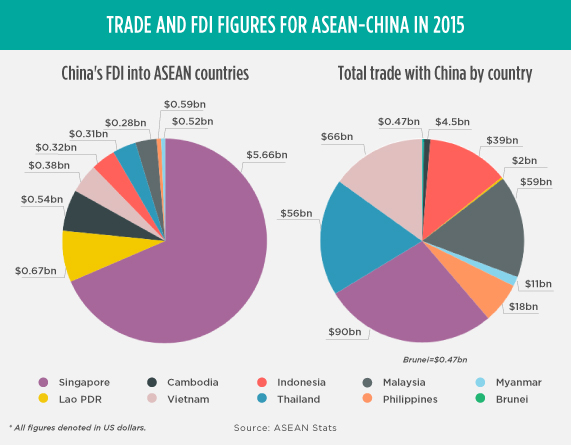 ASEAN and China to forge closer ties
11 April 2017 – During the 18th Meeting of the ASEAN-China Joint Cooperation Committee (JCC) held in Jakarta it was agreed that both sides would work closely to implement the ASEAN-China Plan of Action 2016-2020. China continues to be ASEAN’s largest trading partner and total trade between ASEAN and the world’s second largest economy is expected to reach US$1 trillion by 2020. It was noted that 2017 is ASEAN-China Year of Tourism Cooperation with both sides having lined up activities to implement in the year ahead. ASEAN tourists visiting China went up significantly last year increasing by 57.8 percent reaching a total of 10.34 million visitors.

Vietnam moves into Myanmar microfinance sector
6 April 2017 – In what is considered the first financial joint venture (JV) between the two countries, Vietnamese company Dragon Capital Group and Myanmar’s Ruby Hill Financial have come together to provide microloans for Myanmar. The JV will launch with US$5 million in capital with a plan to raise this figure to US$100 million within five years. According to Sai Sam Htun, chairman of Ruby Hill, Myanmar has an unmet financing demand of around US$1 billion.

Filipino Finance Secretary: Trade war between China-US could harm ASEAN
10 April 2017 – During the 12th ASEAN Finance Ministers’ Investors Seminar in Cebu, Philippines, Filipino Finance Secretary Carlos G. Dominguez III said that any trade war between the US and China would be of great concern for the Philippines and ASEAN as it would adversely affect both. However, he said that ASEAN could counter these “inward-looking” policies by hastening regional integration and leveraging on the young “trainable” population within the region. He added that sharing resources will also help alleviate problems such as a trade war, poverty and unbalanced growth.

Malaysian investments yield lower than expected returns
13 April 2017 – A report published McKinsey shows that returns on Malaysian investments is lower than the risk borne by investor and this has been the general trend from 2008 to 2015. Malaysia has a Sharpe index of 0.6 and anything below a 1.0 indicates the return on investments is less than the risk taken. However of the 20 countries covered in the report only three were above the 1.0 mark – the Philippines, Thailand and the US. The study also covered another factor which was quality of pricing information where again Malaysia fared poorly coming in at 17 only ahead of Vietnam, Pakistan and Chile.

Chinese financial giant moves into Indonesian markets
12 April 2017 – Alibaba Group Holding’s finance affiliate Ant Financial has moved into the Indonesian market through joint venture with Elang Mahkota Teknologi (Emtek) offering payment and financial services in the country. This is the fifth international deal the company has struck since November 2016. The JV will tackle the payment platforms on the BlackBerry messenger service first which has 63 million users in Indonesia.

Singapore’s GDP falls and monetary policy kept neutral
13 April 2017 – The Singaporean economy contracted by an annualised rate of 1.9 percent in the first quarter of 2017 compared to the previous quarter. While exports have picked up, domestic industries such as retail and construction remain weak leading the central bank to maintain a neutral monetary policy. Gross domestic product figures in Singapore tend to be volatile as the economy is highly dependent on exports. For example, in the first quarter manufacturing contracted at an annualised rate of 6.6 percent when in the previous quarter it had expanded by 40 percent. Additionally, the services industry fell by 2.2 percent.

Concerns over Singapore-India trade pact
12 April 2017 – Officials from Indonesia and Malaysia said that they will be sending a joint mission to meet European Union (EU) officials in May 2017. The mission will be sent to prevent the implementation of a parliamentary call to curb the use of palm oil. The EU Parliament has called for vegetable oils including palm oil used in biodiesels, which are made in an unsustainable way or that may have caused deforestation, to be phased out by 2020. The European Parliament also called for a single Certified Sustainable Palm Oil scheme for European countries importing the product. Malaysia and Indonesia produce 85 percent of the world’s palm oil and the EU is the largest importer of palm oil after India.

Uber secures approval for its pilot e-hailing services in Vietnam
13 April 2017 – Uber has secured approval from the Ministry of Transport in Vietnam to begin providing its e-hailing services. The pilot project assists in managing and connecting under-contract passenger transportation using technology. Dang Viet Dung, executive director of Uber Vietnam, said that getting the ministry’s approval marked an important step forward for Uber. The Transport Ministry had previously rejected Uber’s pilot projects in Vietnam twice as its new project was not founded using an appropriate legal entity in accordance to local laws.